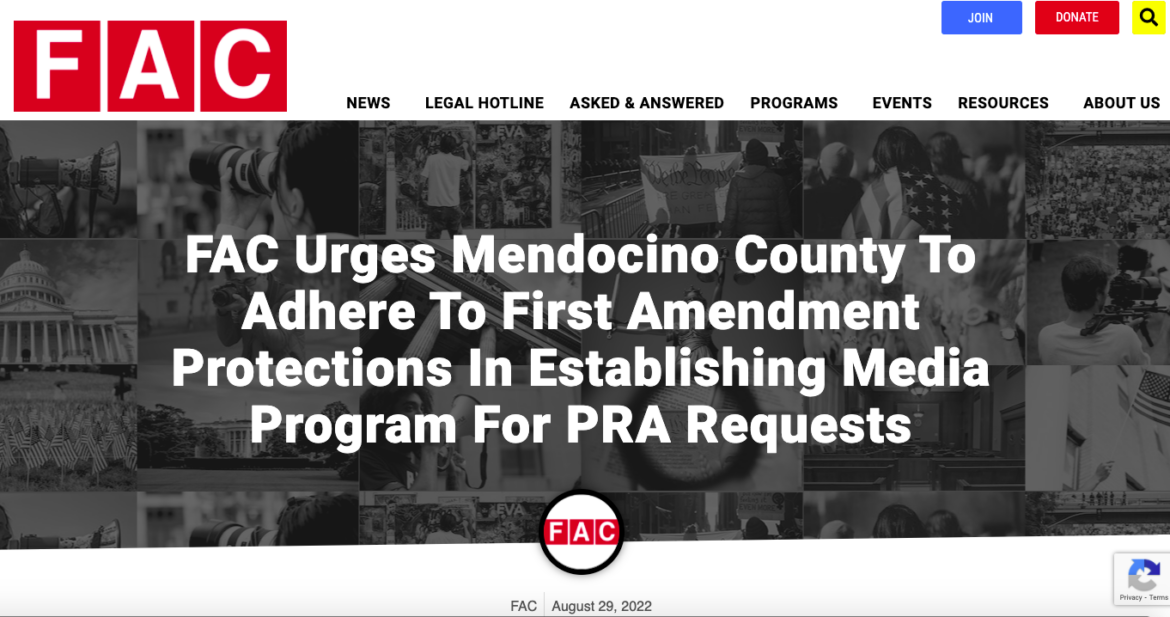 Screenshot from the First Amendment Coalition's letter to Mendocino County Board of Supervisors.

MENDOCINO Co. 8/30/2022 — The First Amendment Coalition (FAC), a nonprofit organization that provides legal work and education on first amendment rights, urged Mendocino County against implementing an ordinance that will charge up to $150 per hour for access to public records.

The FAC sent a letter Monday to Mendocino County’s counsel Christian Curtis — who first introduced the ordinance — calling it unlawful. It would charge people who request public records from Mendocino County for retrieval and production of the records. Documents such as police reports or written communication between government officials are open to the public under the California Public Records Act; these records are public to maintain government transparency and are viewable to all members of the public.

When the ordinance was introduced in June, the Board of Supervisors advised Curtis to create a grant fund for California Public Records Act requests made by media organizations after local media outlets expressed concern about the cost burden of accessing records The board asked Curtis to establish a definition for media who could access the grant fund; neither the fund nor the definition have been created yet, nearly two months after the ordinance took effect.

In its letter, FAC offered both criticism and legal guidance in defining who or what qualifies as a media organization.

“To charge up to $150 per hour for responding to record requests creates a financial barrier that deprives many people of transparency rights guaranteed by the CPRA and California Constitution,” the letter reads. “The grant program cannot cure the defects of an ordinance unlawful on its face.”

“Reserving the right to address those issues separately and without conceding the ordinance is lawful, we submit this letter to explain that any definition of ‘media organization’ the county might adopt must comport with strict First Amendment standards,” it continues.

The CPRA allows government agencies to charge for the duplication of records. Several counties in California have introduced similar ordinances allowing preemptive production fees for public records, using a state government code that allows counties to increase or decrease fees that are already allowed under the CPRA, FAC Director David Loy previously told The Voice.

The Mendocino County Board of Supervisors asked Curtis to create a definition of media that would exempt journalists from paying fees. The board floated around ideas of what would define media, including the amount of Twitter followers or news circulation.

Curtis did not respond to requests for comment by time of publication. He planned to have a fund mechanism and clear definition for media organizations to apply for exemption by the Sept. 13 Board of Supervisors meeting, he said in the Aug. 16 meeting.

The California News Publishers Association and Society of Professional Journalists Northern California Chapter’s Freedom of Information Committee signed off on the FAC’s letter, which  outlined decades of legal precedence that defines media as “a person who is gathering information for the purpose of dissemination to the public.”

“California is very good about the releasing of public information, keeping the population, the citizenry of California informed as to what the government is doing,” said CNPA President Charles Ford Champion II in an interview with The Voice. “This [ordinance] would impede those efforts; it violates both the spirit and the letter of the law.”

The letter cites several Supreme Court decisions that protect the free press, including the decision in Minneapolis Star Tribune v. Minnesota Commissioner of Revenue that prohibits disparate financial burdens on the press, and Lovell v. City of Griffin that determined “the liberty of the press is not confined to newspapers and periodicals. It necessarily embraces pamphlets and leaflets…The press in its historic connotation comprehends every sort of publication which affords a vehicle of information and opinion.”

“For all these reasons, the only appropriate definition of ‘media’ is a person who is gathering information for the purpose of dissemination to the public,” the letter reads. “To look beyond that definition to other factors such as location, circulation, longevity, business model, corporate status, employment status, medium of publication, or the like would amount to impermissible discrimination between segments of the press.”

Editor’s note: The full letter from FAC is included below, and our previous coverage of the public records fee increase can be found here. The Mendocino Voice and other local media have also sent a joint letter to the supervisors expressing opposition to the new public records fees, which you can read here.