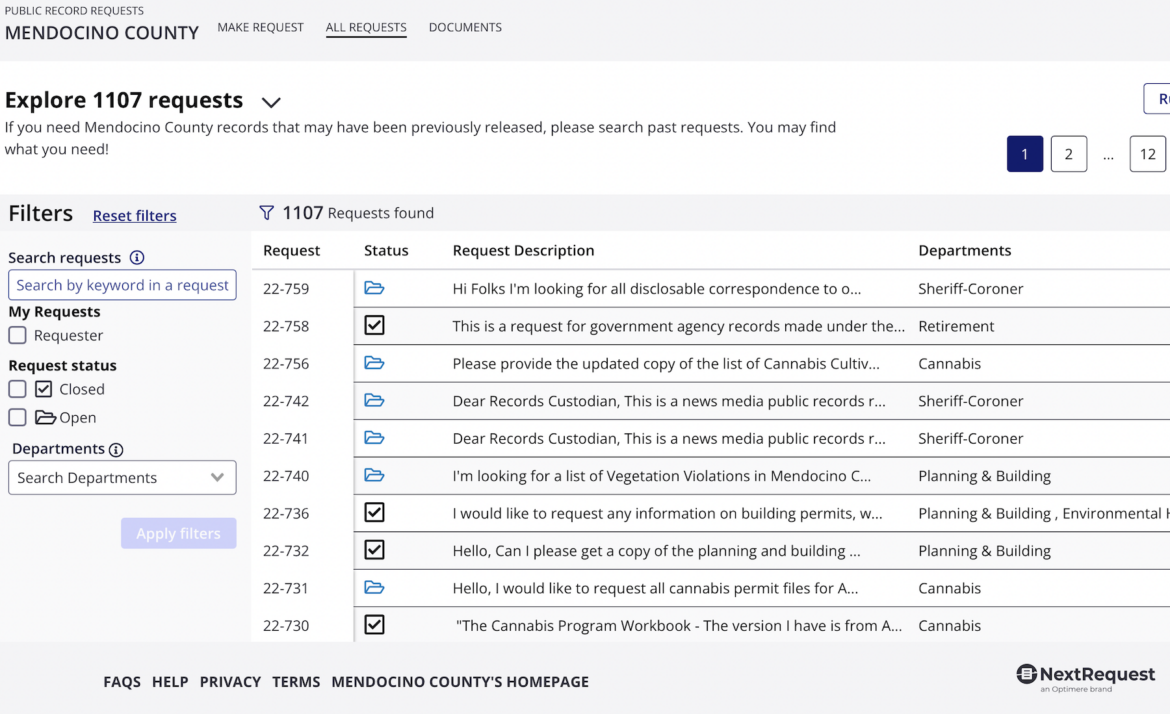 Editor’s note: This letter was sent and published on August 31, 2022, but we are happy to add additional signatures — if you would like to be added to the list or republish the article, please contact [email protected]. You can read our reporting on Mendocino County’s public records fee change here.

We write to express our opposition to Mendocino County’s new public records ordinance (No. 4507), and to question the creation of a media fund to offset the fees imposed by the records ordinance (No. 22-181). We also wish to voice our support for the First Amendment Coalition’s letter to the Board of Supervisors, dated August 29, 2022. Access to these records is essential to democracy, accountability and government oversight.

We believe the ordinance language and new fees violate state law and present an unreasonably high burden on members of the public, who play a crucial oversight role in Mendocino County. This will result in a demonstrable chilling effect on such transparency efforts.

To quote the FAC, “our position is that the Ordinance is unlawful because the California Public  Records Act (“CPRA”) does not authorize fees for locating, reviewing, and redacting records  and no statute authorizes a county to impose fees not otherwise allowed by the CPRA. To charge up to $150 per hour for responding to record requests creates a financial barrier that  deprives many people of transparency rights guaranteed by the CPRA and California  Constitution. The grant program cannot cure the defects of an ordinance unlawful on its face.”

The California Public Records Act (CPRA) clearly states that only the costs of duplication can be passed on to the public, and the public has a right to inspect such records at no expense. The creation of a media fund does not address our overarching concerns about what this ordinance will do to transparency and government oversight in Mendocino County. Moreover, the supervisors and county counsel have publicly stated their intent with these fees is to reduce the number of requests as well as to assess them based on the perceived intent of the requester, which is a clear violation of state law.

As FAC wrote, “Regardless of any benign motive to support local media, the First Amendment does not permit the government to favor one segment of the press over another, whether based on geography,  circulation, medium of publication, or any other characteristic. For all these reasons, the only appropriate definition of ‘media’ is a person who is gathering  information for the purpose of dissemination to the public… To look beyond that definition to other factors such as location, circulation, longevity, business model, corporate status, employment status, medium of publication, or the like would amount to impermissible discrimination between segments of the press.”

The media outlets covering Mendocino County vary in size, medium of distribution, legal structure, and business model, but many of us cannot afford additional fees — much like the community organizations, freelance journalists and residents who comprise the majority of public records requestors. We fear these ordinances are a boondoggle that will cost the county more than it saves in staff time and potential legal fees.

Details of how this fund will be created, administered, and implemented are still not publicly available weeks after the fee ordinance took effect, demonstrating the lack of due diligence county supervisors and counsel have put in. The creation of a media fund will inevitably take additional staff time, generate public comment and debate, and increase administration costs  on county staff by creating an additional layer of applications, administration, labor, and grant dispersals on top of the public records request process required by state law.

If the goal is to reduce staff costs, as supervisors and county counsel have expressed, neither this ordinance nor the media fund will accomplish this, and is likely to have the opposite effect. Moreover, the creation of the fund does not address the fundamental issue, which is ensuring public access to these records — in a county where many residents cannot afford $150/hr to do so.

We are urging the Board of Supervisors to repeal this ordinance, which we believe to be in violation of the California Public Records Act. We are joined by the majority of public comments, including statements from KZYX, the Mendocino Cannabis Alliance, First Amendment Coalition, California News Publishers Association, Society of Professional Journalists Northern California Chapter’s Freedom of Information Committee, and the signers included below.

Thanks for your consideration,

Will Carruthers, News editor of the North Bay Bohemian and Pacific Sun

One thought on “Open letter to Mendocino County supervisors: new public records fees will cost more than they save”