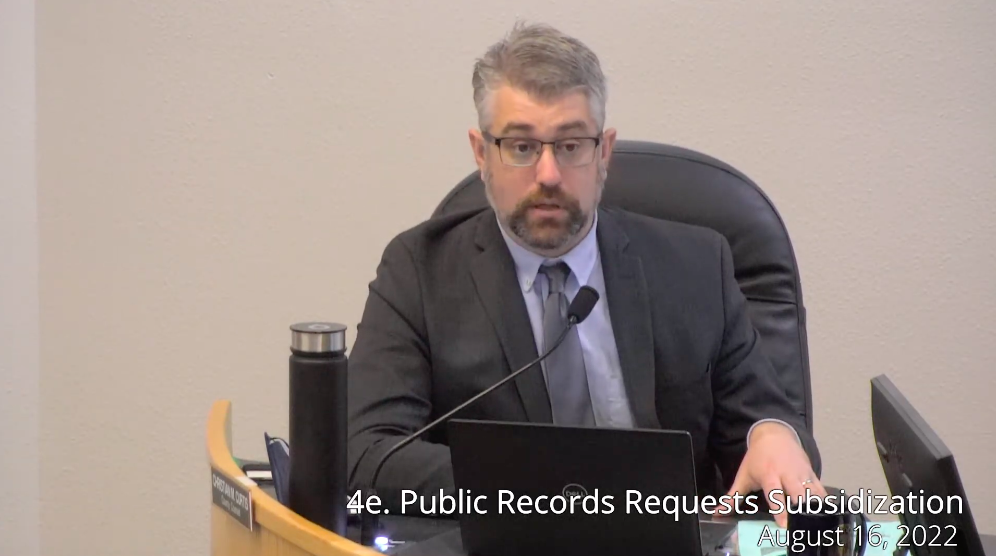 UKIAH, 8/17/22 — Mendocino County will now charge preemptive fees for records requests but will set aside a grant fund for requests made by media organizations, a structure the county has not yet finalized and something first amendment scholars say is of questionable legality.

The county’s legal counsel, Christian Curtis, first introduced the measure in the June 21 Board of Supervisors meeting in response to concerns that people were abusing the California Public Records Act’s (CPRA) access to free public records. Some people were requesting access to documents that took hours for county staff to retrieve, a few were making a high volume of requests, and some of the requesters were commercial entities and people who did not reside in Mendocino County, Curtis said during the June meeting. Supervisors then unanimously approved an ordinance implementing a new fee structure, which went into effect last week.

After concern from local media organizations such as KZYX, the editorial staff of The Mendocino Voice, and freelance journalists in Mendocino County about the burden it would put on newsrooms to pay extra costs for records requests, during the July 12 meeting the Board of Supervisors approved the second draft of the ordinance, but agreed to create a separate fund to cover the costs of requests made by media organizations.

But the mechanism to do so was not set up by the Aug. 16 Board of Supervisors meeting, about a month after the ordinance was passed and several days after the ordinance went into effect, and the question of what qualified someone as representing a news organization was still murky.

David Loy, legal director of the First Amendment Coalition (FAC), said the ordinance was not legal under the California Public Records Act.

“The California Public Records Act specifically prohibits the government from taking into account the purpose behind the records request,” Loy said. “The duty to disclose public records is written into the California Constitution. It is the paramount duty of the public agency to be open, accountable and transparent to the public.”

The ordinance will require requesters to pay $20 per hour for the search of records that are considered public under the CPRA. Requesters will be charged $150 per hour for the search and production of records that may include both disclosable and exempt records requiring redactions of certain information. Some documents that are exempt from the CPRA include personnel and medical records.

The county must give a good-faith estimate of the time it will take to retrieve the records if the cost anticipated is more than $50, and the requester must pay the estimated fees before county employees begin the search of the records.

The first full hour of time spent on any requests made by one requester each month will be free. The free hour applies only to a requester who is “an identifiable natural person,” according to the language of the ordinance.

Under the CPRA, government agencies are allowed to charge for the cost of duplicating records — but requesters retain the right to come in to examine the records with no additional charge to determine if they want copies. But several other counties have implemented retrieval fee ordinances, said Monica Price, a legal fellow at the FAC. Fresno, Siskiyou, Ventura, Riverside, Santa Clara, and Lassen Counties have implemented such ordinances.

Loy said these counties have used a California government code that authorizes county board of supervisors to increase or decrease fees that are already authorized under the CPRA to implement additional retrieval fees. A 2010 court case decided in California’s First District Court of Appeals determined that counties have some flexibility in charging fees to “realistically address ongoing costs of providing copies of records.”

“[The First Amendment Coalition] position is they legally cannot charge you for the time it takes to go find the records and review and redact them,” Loy said. “Now they obviously disagree and they pass these ordinances but our position is that, while they may be allowed to alter perhaps what is the cost to provide the copy, they cannot charge for search, review and redaction time.”

Mendocino County is following guidance from Attorney General Rob Bonta who determined a similar fee structure in Ventura County was legal under current statutes, Curtis told The Voice in an interview.

“Ultimately, an attorney general opinion is not binding but the courts do afford them a great deal of deference and, you know, we feel pretty comfortable relying on that,” Curtis said.

When the ordinance was first introduced to the Board of Supervisors, Curtis said the amount of records requests made to the county through the NextRequest software, which was implemented in 2016, had doubled in the past two years. The county is receiving about five requests per business day, Curtis said.

“A lot of those are very simple and very easy to respond to. So when someone asks for a particular document, maybe a building file, it’s a very sort of simple, straightforward, we look at the document, we provide it to them, we’re done,” Curtis said during the June 21 meeting. “But we’ve also been seeing an uptick in what I would say are increasingly complex requests.”

Some of the requests include requests of all emails relating to a certain topic. But the emails may include information regarding Child Protection Services cases or other information that is exempt from the CPRA, requiring more manual review of the documents, Curtis said. By charging a fee for retrieving these records, it would make up for the employee’s time for retrieving the documents and bring the county revenue to provide for these services.

The county also receives requests from companies outside of Mendocino County or California altogether requesting data for market research, he said.

“I want to be clear here, some of these requests might actually go away rather than be generating revenue, there’s a pretty substantial number of requests we get, for example they’re coming from companies, say, doing market research or academics that are doing research,” Curis said during the meeting. “And right now I don’t know that they’d be requesting that information or getting that information if they actually had to pay the costs of the work that’s being done.

“I mean, essentially it’s only an attractive model because it’s being subsidized by the County of Mendocino,” he continued.

He also wants to avoid individuals who use the records requests just to take up staff time, something he said happened in Shasta County where a single requester filed 1,000 requests in one year.

About 5% of requests in Mendocino County’s NextRequest database are from a single requester who was upset about a certain code enforcement, he said. By requiring fees to obtain those records, he’s hoping some of the requests may drop off.

“I may have an opinion that it’s not the best use of county resources to be essentially subsidizing market resources for, you know, a financial firm in Canada making the requests, but under the Public Records Act there is no mechanism to say, ‘Because we don’t like your request we’re not going to comply,’” Curtis said in an interview with The Voice.

“The fee structure was really one way that we thought potentially balanced those costs that may not be the best use of public resources, which again, those people are entitled to those records, they just have to pay the actual costs of providing them versus those that really are sort of for the public good,” he continued.

But a government agency is not allowed to judge a request based on the intent of the request or determine who does or does not have to pay fees, Loy said.

The Board of Supervisors asked Curtis to create a mechanism that exempts media from retrieval fees in requesting records, in response to concerns during public comment. Supervisors thought access to free records for journalists was important in upholding their freedom of the press.

Curtis had not determined a framework for determining who qualified as a journalist by the time the ordinance was implemented, but said the framework and a separate fund to subsidize media requests would be finalized by the Board of Supervisors’ Sept. 13 meeting.

Supervisors discussed possible determining factors for media during the Aug. 16 meeting including anyone with a Federal Communications License to broadcast news or papers of “general circulation”, and discussed how one might define an entity such as an online news website. They also suggested using the amount of Twitter followers or news circulation as criteria and requiring news organizations to submit an application establishing them as a credible organization.

But members of the media argued it could get complicated to define who is a journalist with the range of media outlets in the county and the possibility of community members freelancing for an outlet.

“I have no followers on Twitter, I do work for an organization that has an FCC license but I also freelance for a couple of websites in Mendocino and Humboldt County that are pretty well-established. But I also have a few volunteers who will occasionally offer to research something that they are able to be laser focused on that I can only sometimes glance at,” said KZYX Reporter Sarah Reith during public comment at the Aug. 16 Board meeting.

Loy again emphasized that the government is not allowed to determine the intent of a records request and charge based on who is requesting the information.

“There’s a separate question about, ‘Is it okay to exempt the media or charge lower fees or reduce fees or waive fees for the media?’” Loy said. “Certainly that’s not necessarily a bad thing from a policy standpoint, but if a threshold fee is illegal, it doesn’t make it less illegal that you create an exemption.”