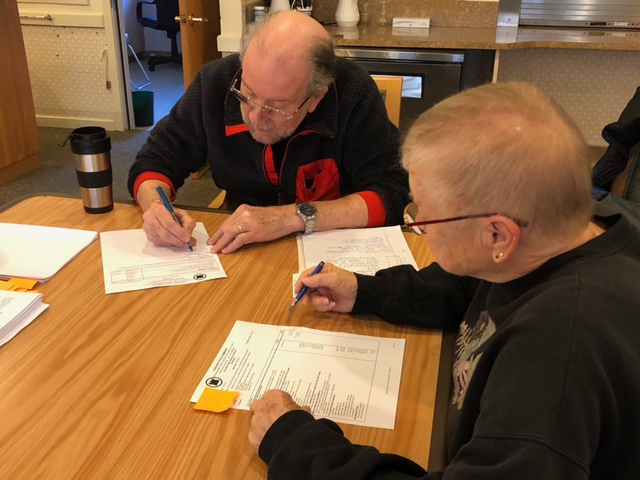 James Kachik, president and Sheila Klopper, secretary of The Woods Cooperative Association, sign papers that give residents ownership of the park their homes are located on and its amenities.

A co-op formed to help the residents of a manufactured home community in Little River purchase the 43 acres of land on which their homes sit has closed the deal, according to a press release issued by The Woods. Residents say they will have a bigger say in how the neighborhood is run, like setting the price of rent. Rent is expected to go up for some residents, but a $500,000 fund has been established to help subsidize housing costs for residents unable to afford the increase.

The Woods residents, ages 55 to 101, owned the upscale modular homes they live in but not the land itself. When San Francisco-based Sequoia Living put the property up for sale, they grew concerned that a developer might buy it, raise the rent and price them out — potentially forcing residents to sell their homes. The co-op’s offer wasn’t the highest received by the seller, but it was selected to allow residents to remain in their homes and avoid displacement in the Mendocino Coast’s tight housing market. The closing price has not yet been announced as part of a nondisclosure agreement.

The original press release has been included below:

Residents close deal on The Woods

The deal is done!

The 55+ year old residents of Little River’s “The Woods” have closed the deal for the land their homes sit on and will now determine what rents will be and how their park will be run. The sale price is not being released at this time due to a non-disclosure agreement.  The purchase will mean rent increases for the residents, who had been paying under $1000 per month for the space rents to the $1200 per month range.  A $500,000 fund was set up as part of the purchase to help subsidize residents who can’t afford the increase.  About 20 residents are paying the full price of $1222 per month, to help free up money to help others pay the increased rents.

When the non-profit that owns The Woods in LIttle River announced in March that the park would be sold, the situation looked dire.

Residents of the Woods, ranging in age from 55 to 101, who own their individual homes, formed The Woods Cooperative Association to put in a bid to compete with the hedge funds and large equity firms to buy the 43 acres their homes sit on and the amenities. For example, a master tank provides propane for heating which is piped underground to each home and individually metered.

The Woods was particularly attractive to investors because the homes are upscale modular structures that are designed to be permanent.  An owner who hiked rents could have ended up owning the homes too if residents couldn’t afford to pay.

The Woods includes 109 manufactured homes in a park-like setting with towering fir, pine and redwood trees that make it seem like living in a forest. It has a number of amenities, including a clubhouse, indoor pool and spa, and The Lodge, a former assisted living residence.  Plans are in the works to turn what was The Lodge into senior living apartments.  Currently 98 of the homeowners are part of The Woods Cooperative Association. Residents who don’t join the Association simply pay rent, as they have been doing all along.

Numerous offers came in and residents were worried.

Then came the good news.

On May 24, 2021, Sara McVey, President and CEO of Sequoia Living, announced that the offer submitted by the Woods Cooperative Association had been accepted with specified conditions. Sequoia Living reportedly took the residents’ offer over higher offers from private buyers, so that residents could remain in their homes. All conditions from the seller and lender have been met. The sale closed on December 1, 2021.

The Woods was designed and developed in the 1970’s by renowned California architect, the late Paul Tay and his wife, Ruth Tay.  In 1993, operations were turned over to Northern California Presbyterian Homes, a non-profit organization that provides senior housing and services primarily in the San Francisco Bay Area.

On March 11, 2021, Sequoia Living, formerly known as Northern California Presbyterian Homes & Services, announced that The Woods would be sold. The Woods resident homeowners decided to take control of their destiny and established The Woods Cooperative Association, Inc. This was accomplished with the assistance of Resident Owned Communities USA (ROC USA) and its California affiliate, California Center for Cooperative Development (CCCD).  Both will continue offering ongoing technical management assistance for 10 years.   ROC USA has led a nationwide movement to allow mobile home park residents to fend off speculators and buy their own parks.  The successful effort in Little River gives ROC USA, which is renowned for its work in New England, a stronger foothold in California.

There was a residents’ council in existence at The Woods when the need for a formal board of directors to run the new co-op came to light. Architect James Kachik and other members of that council, including Harvey Chess, Sheila Klopper, Barbara Cohen and Cynthia Johnson became part of the Interim Board of Directors the Co-op, which quickly created a nonprofit legal structure to participate as a cooperative in the bidding process for the entire facility.

Across from The Woods is the Coast’s airport. The community of Little River is isolated in the great forest and perhaps lesser known outside the Coast than communities like Westport and Albion. But Little River is also home to a golf course, historic cemetery, restaurants, grocery store and the Little River Inn, which dates back to 1853.