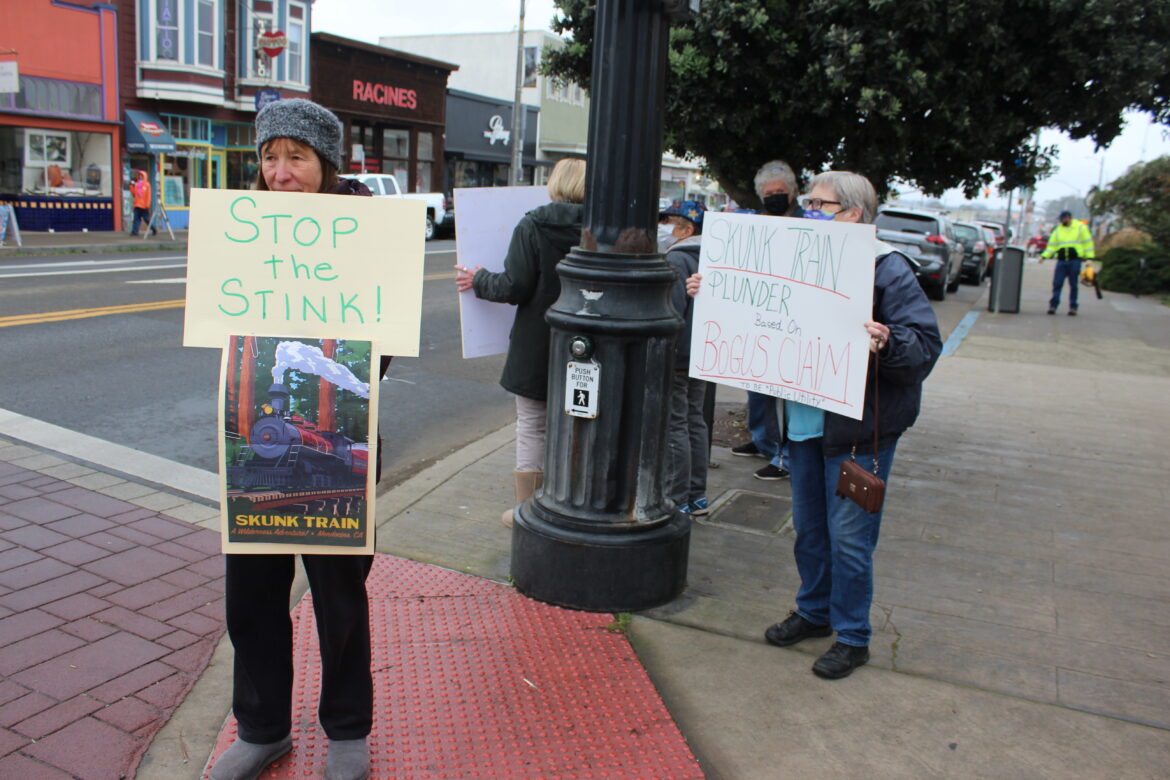 Daney Dawson holds up a sign protesting the Skunk Train in front of Fort Bragg town hall on Saturday, Dec. 4. She was among a dozen others who don't want the train to be considered a public utility anymore, which is the topic of a lawsuit between the city and Skunk Train owners that's on the agenda of a special city council meeting Monday afternoon.

FORT BRAGG, 12/5/21 — Since the Skunk Train used its status as a public utility to acquire the Georgia-Pacific millsite, which amounts to about a fifth of the city, using eminent domain, residents and city officials have been sounding the alarm about the company. On Saturday, about a dozen people came out to protest the Skunk Train and support the revocation of its status as a railroad in front of Fort Bragg town hall.

“I think this is an unethical land grab,” said Daney Dawson. “It’s an attempt at bypassing local planning and zoning to take over the town of Fort Bragg. It’ll remove any oversight by the city council and local people about what kind of development takes place here, and it’s going to grossly change the character of Fort Bragg.”

The Fort Bragg City Council is having a special meeting at 4 p.m. Monday to discuss its lawsuit in Mendocino County Superior Court against Mendocino Railway, the owner of the Skunk Train, asking the court to strip the company of its status as a public utility and require it to comply with all city laws. The meeting isn’t expected to be open to the public because the council members will be discussing an ongoing lawsuit, but they’re required to report out certain actions they take, like entering into an agreement.

The assertion that the Skunk Train doesn’t have any oversight is false, said Mike Hart, CEO and founder of Sierra Energy, Mendocino Railway’s parent company. “We have an entire alphabet soup of regulatory bodies to whom we report,” Hart said, such as the California Department of Toxic Substances Control.

That’s become a particular point of concern since a post attributed to City Manager Tabatha Miller began circulating on social media Dec. 1 stating there was an oil spill along the tracks to Pudding Creek, and that a county employee had been denied access to inspect the site. Hart rejected that account, saying the pool of oil in question was nowhere near Pudding Creek and the county employee didn’t follow the proper procedures to initiate an inspection.