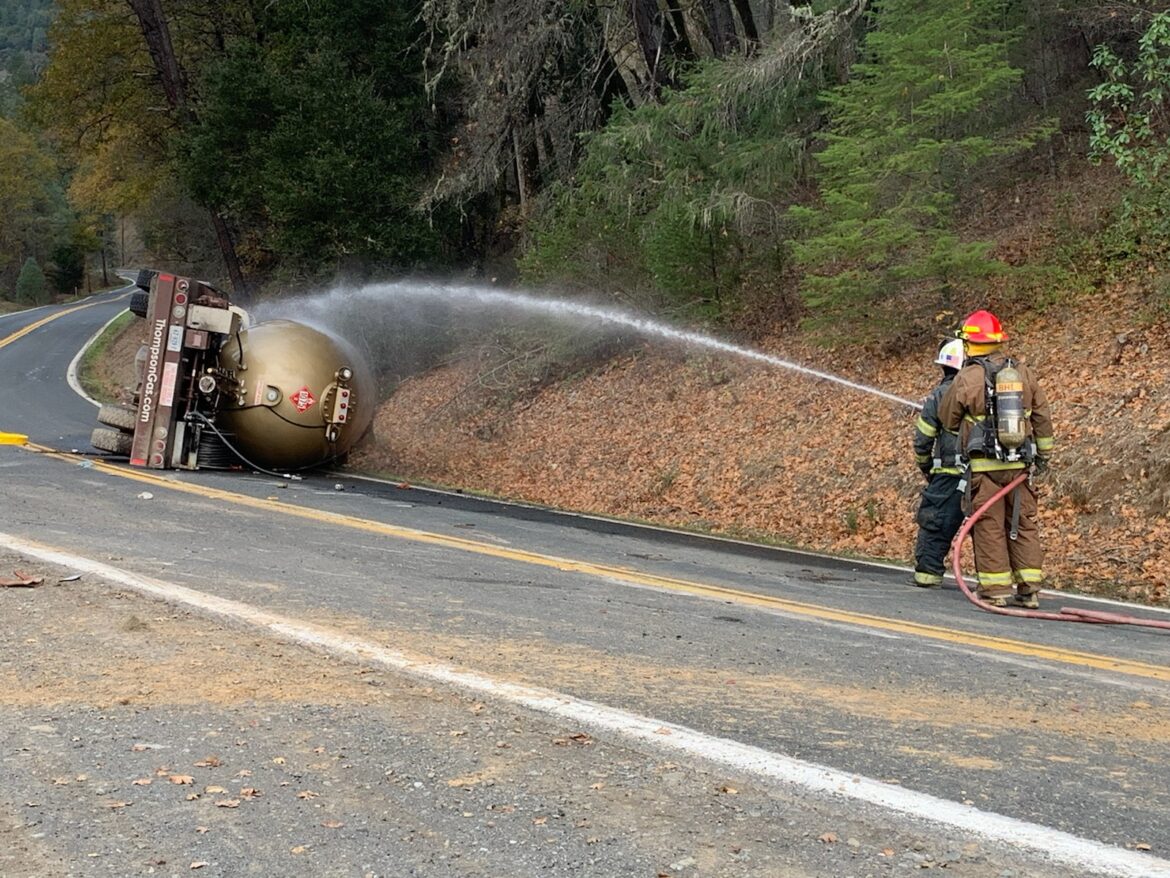 Firefighters spray water on a crack in the truck's propane cylinder to keep it from freezing over in an effort to reopen the roadway as soon as possible.

UPDATE: 5 p.m. — Firefighters at the scene of Tuesday’s crash are using fire hoses to to keep a crack in the propane cylinder from freezing over, and taking measures to increase the rate at which the cylinder empties. There’s still a risk of explosion, however, and currently no estimate for when it will be safe to reopen the roadway. There’s also a secondary hazard of potential exposure to the propane gas, which could displace regular air and lead to asphyxiation for people in the area as well as wildlife. Hazardous materials personnel told the Mendocino Voice that there is some risk of propane gas settling into the nearby water way, but the primary concerns for water contamination are solids or liquids and this is a hydrocarbon in a gaseous state which will not mix with water. Once all of the propane has leaked from the truck, they should be able to clear the roadway in a matter of hours, but at this point know one knows when that process will begin. Check back tomorrow for more information.

UPDATE: 3:20 p.m. — CHP Sgt. Matt Harvey said the propane cylinder is still leaking more than 24 hours after the crash, and firefighters at the scene are using warm water from a fire hose to raise the temperature of its contents. Emergency crews had hoped the tank would off-gas all the way overnight, but dropping temperatures slowed that down.

‘“There’s kind of a frost line and as that frost line goes down it’s telling us the liquid in the tank is being reduced, so that’s what we want,” Harvey said in a phone call this afternoon. “We understand this is extremely frustrating, when you live in an isolated community with one way in and one way out. We understand that, it’s a big deal to us. We’re equally frustrated. We had no idea this was going to into the night, much less the following day. We’re doing everything we can, it’s just not a safe scene to let the public drive by.”

Harvey did not share an estimate for when the roadway would reopen.

MENDOCINO Co., 11/10/21 — Highway 162 remains closed halfway from U.S. Highway 101 to Dos Rios today, more than 24 hours after an eastbound big-rig hauling propane crashed near Outlet Creek. A valve ruptured, causing the compressed gas to leak, and at one point the scene of the crash was enveloped in a visible cloud of vapor. Hazardous materials personnel have been deployed to the scene, and as of noon they were still working to offload the remaining gas with no estimate for when the road would reopen. Officer Rick Fowler with the Garberville office of the California Highway Patrol said additional information would be available this afternoon.