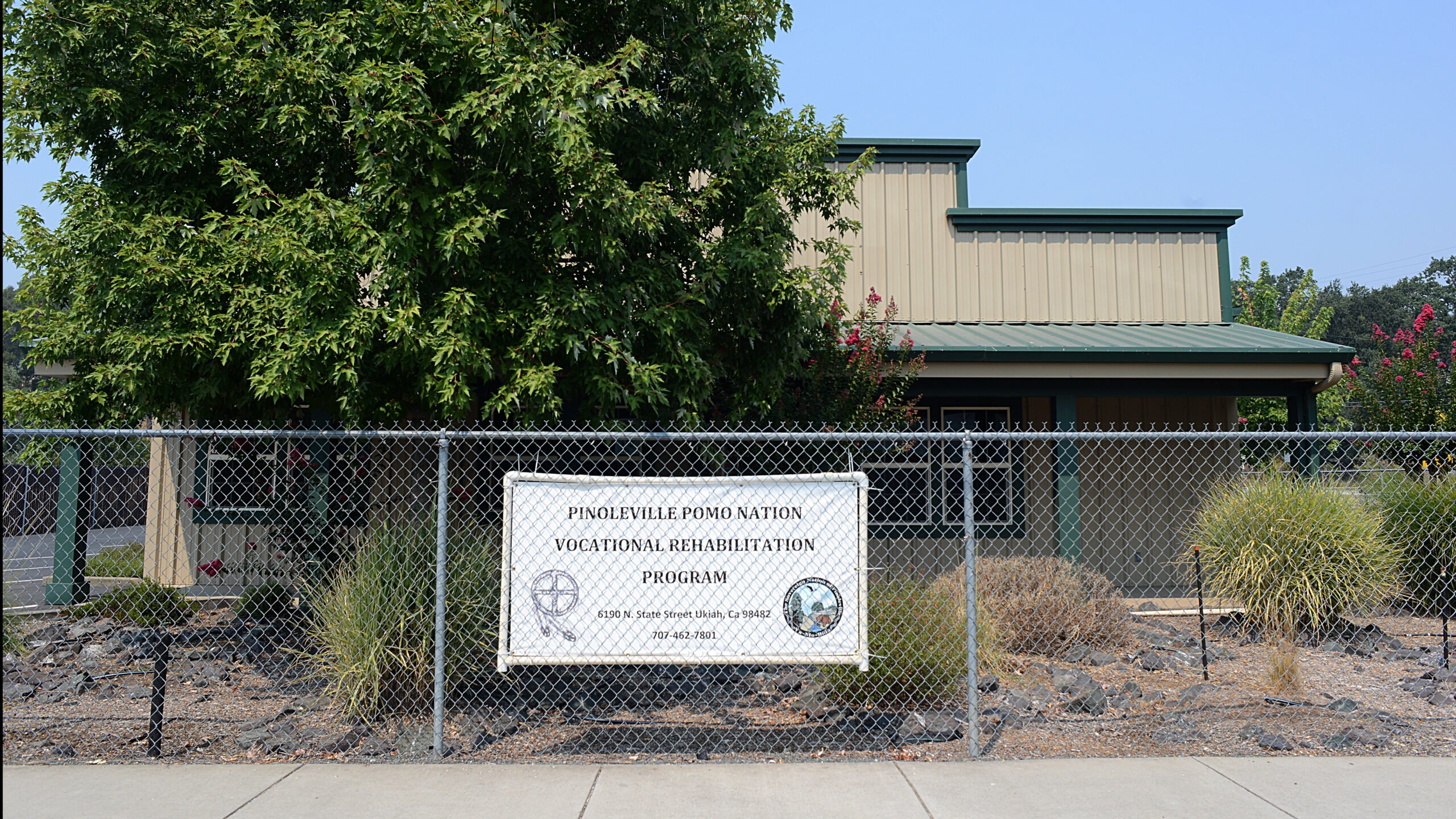 MENDOCINO Co., 9/17/21 — For the past five years, the Pinoleville Band of Pomo Indians has held the “Healing Hearts, Saving Lives Suicide Awareness Walk.” The walk is one facet of the Pinoleville Pomo Nation’s efforts to address the increase of suicide in communities across the county. In 2020, there were 34 suicides in Mendocino County, a dramatic increase of 70% from the previous year. On average, the county has 20-21 suicides per year, comparatively higher than in other counties statewide.

Gabriel Ray is a Tribal Council member of the Scotts Valley Band of Pomo Indians, a landless tribe, and the substance abuse and suicide prevention coordinator for the Pinoleville Pomo Nation. Ray knew the idea to walk for suicide awareness had struck a chord when 137 people participated in the first event. After taking every precaution in accordance with public health guidance, the group had its biggest turnout last year; participants walked around Ukiah’s Alex Thomas Plaza in Ukiah until midnight.

Perhaps a large group gathering to raise awareness for suicide prevention isn’t surprising, given the county’s rise in suicides in 2020 in stark contrast with national trends. Dr. Jenine Miller, director of Mendocino County’s Behavioral Health and Recovery Services (BHRS), can’t recall ever seeing such high numbers and correlates the rise in suicides with the COVID-19 pandemic. “The top stressors of life all hit us at once,” Miller says. “Our world turned upside down and [Mendocino County] saw an increase in suicide… in loneliness, isolation, and depression.”

Karen Lovato, BHRS program manager, notes risk factors associated with suicide, loss of housing, a job or a loved one paired with increased isolation and lack of physical connection, have become an all-too common experience for people during the pandemic.

Miller says there have been 14 suicides reported as of August, lower compared to this time last year when there were 26. Miller is only cautiously optimistic, however, noting suicides are frequently under-reported, resulting in inadequate data and reporting often lagging weeks behind. “We know it’s more,” she acknowledges. “There are deaths that would be declared differently if we knew the true intention.” Suicide threats and ideation remain high. There have been 653 calls to crisis lines in the county this year to date, according to the latest data from Redwood Quality Management Company (RQMC), which provides monthly data to the Behavioral Health Advisory Board.

As Mendocino County finds itself in a deadly wave of COVID-19 cases due to the Delta variant, the walk’s organizers are prioritizing COVID-19 safety measures, and taking creative approaches, such as replacing an open mic with a collection of stories and art from those impacted by suicide, mainly youth. “[We wanted to find a way] to allow people to still share their story and be heard in a way that was safe, so we came up with the idea of the suicide storybook,” says Haley Pulawa, one of the organizers of the walk, who works with the Pinoleville Pomo Nation’s suicide prevention team and heads its Youth Substance Use Disorder Prevention program. The storybook highlights the effect youth suicides have had on family members and friends, written in their own words.  “Even if it could save a life… I hope that a youth that’s struggling could read [the storybook] and decide ‘I can get through this. I can get help,’ which is the goal,” says Pulawa.

At the Pinoleville Pomo Nation’s vocational rehabilitation office on the edge of Ukiah, Pulawa looks out the window at the sky, hazy with wildfire smoke that had drifted over the mountains. “Smoke in the air. That’s what it feels like for suicidal people all the time,” says Pulawa. “We experience it once a year for a few days, but that’s mentally how they feel all the time. It’s hard to breathe.”

Pulawa, a member of the Round Valley Indian Tribes, says the rates of suicide in the Native community are high, but accurate data on the suicide rates in Native communities is difficult to track. One reason is the way data is, or isn’t, collected on Indigenous peoples, from federal to county levels. Quality data collection varies by Tribe, says Pulawa, and misclassifications are all too common. “[For example,] a person may be Latino and Native American, but put down Latino, so the Native American data is erased, even though they may have lived their whole life on the reservation,” she says. Also, the taboo of suicide plays a role —“many families would prefer a suicide reported as accidental.” In community surveys, Pulawa’s team includes a question about whether they have considered suicide. A majority of respondents say yes.

Lovato says Mendocino County is lacking data on suicides in the Native communities. “I always feel there is a big piece that is missing if we don’t have that,” Lovato says. “Clearly, we are missing information about areas that need education and outreach.”

One of those areas, suicide among Native youth, is where Pulawa and Ray are focusing their suicide prevention efforts. For Native youth, suicide is the second leading cause of death, and 2.5 times higher than the overall national average, the highest youth suicide rate of all races and ethnicities in the United States. “We have youth who struggle, some attempts [to commit suicide], and sadly some have died,” Pulawa says.

For Native youth struggling with suicide, ‘’culture is prevention’’

The Pinoleville Pomo Nation’s suicide and substance abuse prevention program is funded through an Elevate Youth California grant from the Sierra Health Foundation for Native and non-Native youth aged 18-26 and rooted in traditional culture. “Culture is prevention,” Pulawa says. Pulawa and Ray work with around 40 youth, from five inland schools. Pre-pandemic they reached hundreds, they say, mostly through tribe or school referrals, and organized sports camps, basketball tournaments and cultural campouts for families. Ray says pre-pandemic, Native youth were doing better than in the past.

“I think that this time in history is a good time for our people,” Ray says. “While there is addiction and suicide, and all the bad stuff is still there, there are more good things happening. We have higher graduation rates; school attendance, grades and college enrollment were increasing, more people working towards sobriety. In the past it was all the negatives, but you can see the change happening. It is getting better. More and more people are stepping up.”

Substance use and suicide prevention are among the priorities for Youth Council Members of the Coyote Valley Band of Pomo Indians, who have created subcommittees to organize prevention trainings and educational programs. The Council is also working on building an inter-Tribal Native crisis group to address community issues. The ultimate goal will be to make policy changes on the county level. “We’re working on getting our communities healthy and safe, and have these kids grow up in an environment where they don’t have to see drugs, or alcohol, or suicide all the time. How can we bring the youth [to the conversation] who sometimes see too much, right? Let’s listen to them.”

In September 2020, Miller warned of a mental health epidemic within the pandemic, prompting BHRS to start the “Reach out and ask the question” suicide awareness campaign to destigmatize talking about suicide, which she says is still taboo for many people. “We as a community have to ask the question: ‘Are you suicidal?’,” Miller says. “Until we as a society can ask the question, we haven’t done our job.”

On Saturday, Pulawa, Ray and others will be offering support and a safe space to do just that. “[The walk] really brings the community together for an important cause,” Pulawa says. “We try to make it as safe as possible knowing the importance of it, why we needed to have [the walk] and the rise of suicide in Mendocino County specifically. We couldn’t not have it.”

The 5th Annual Suicide Awareness Walk will be Saturday September 18, 2021 from 10am-4pm at Alex Thomas Plaza in Ukiah. Masks and physical distancing are requested. For more information, contact Haley Pulawa at [email protected] or 707-462-7801 extension 208.

If you or someone you know is suicidal and needs support, here are some resources:

The Crisis Line is for someone who is experiencing a mental health crisis and needs help immediately. The line is toll-free and open 24/7.

ACES Aware has information and resources related to stress management during the pandemic.

One thought on “Looking for light in the darkness: Addressing suicide in Mendocino County”