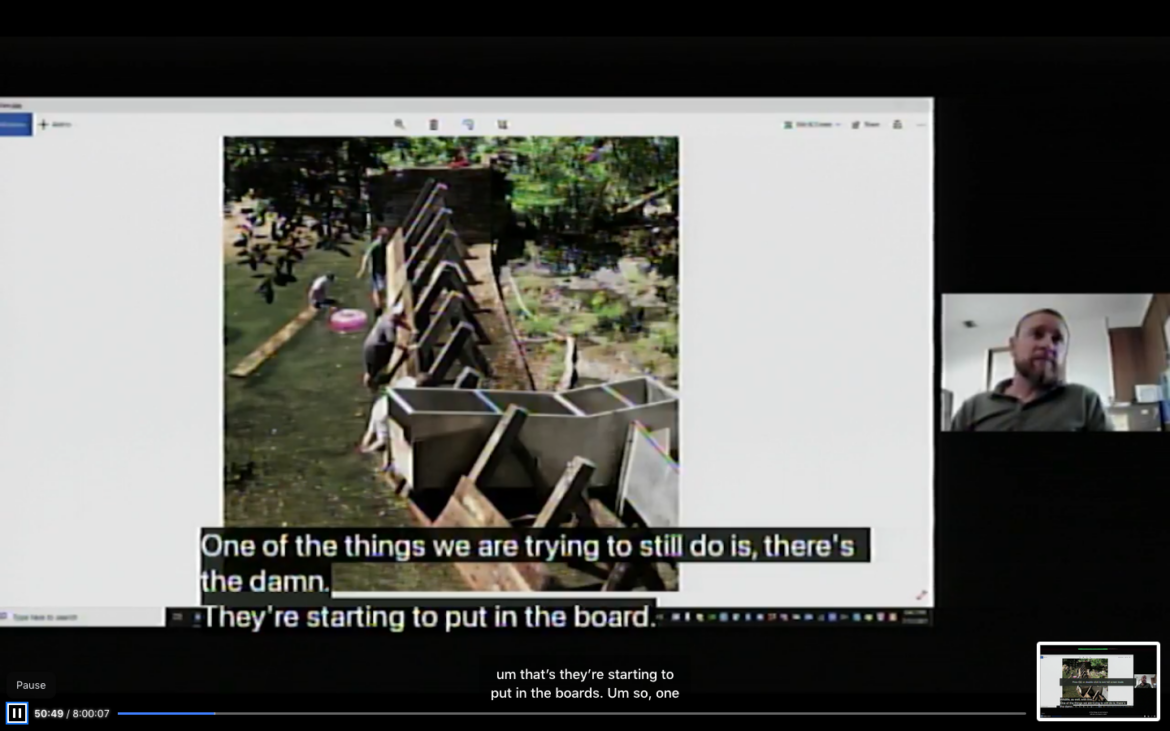 A screenshot from the July 12 Fort Bragg City Council shows the dam being put up at Camp Noyo that the city says has drastically reduced Noyo River Flows. City Public Works Director John Smith is shown on the right.

UPDATE, 7/15/21 — Camp Noyo has issued a statement saying the city’s press release was incorrect and misleading. Read our latest reporting:

ORIGINAL
FORT BRAGG, 7/13/21 — A permitted dam for recreational uses put across the Noyo River by Camp Noyo has resulted in a major drop in flows to the already water strapped municipality and is being investigated by the city of Fort Bragg, which is preparing for the worst water year on record. There is no claim that any water is being removed from the river bed.

The Noyo is one of three sources of water for the city. Camp Noyo is located 16.4 miles east of Fort Bragg at the base of the Noyo River Canyon. It is a private campground with tents, cabins, a chalet and holds special events.

“This year the Noyo River flows have hovered at levels equal to or below 1977, which is the worst drought year on record. Between July 2 and July 7, the Noyo River flows dropped from 2.27 cubic feet per second (cfs)to .41 cfs or by more than 80%, well below the 1977 levels during the same period,” a city press release said.

“The dramatic drop in flows is the result of a seasonal dam put in place by Camp Noyo higher along the Noyo River. City officials have reached out to the Water Quality Board Division of Water Rights, CA Fish and Wildlife, County staff and elected officials to determine if the diversion is legal and supersedes the City’s 1959 3 cubic feet per second water right. If flows on the Noyo River are not partially restored, the City will be forced to conserve water for its customers and shut down its out of City sales to the surrounding county,” the press release said.

Fort Bragg Public Works Director John Smith said the dam has an in-stream permit that allows it to be used in the summer months. The dam, constructed of rising rows of wooden slats, has been in seasonal use for many years. Smith said the fact flows to the dam area were lower this year made the dam more of an issue than in the past

“They have put in their boards to dam up the river, just up river from us. It’s a sizeable dam. We are looking into that diversion. It doesn’t sound like they have a water right up river, but we will let that play out with the regulatory folks. They do have an in in-stream bed alteration agreement. I’m still working on how those two are not matched together,” Smith told the Council Monday night.

Smith also discussed a plan by which the Skunk Train could bring water by rail to Fort Bragg. The city is having meetings on the topic.

In another matter, the Council unanimously passed a resolution ratifying a “water warning” which implements mandatory “stage 2” water conservation restrictions. The stage 2 conservation measures target a 10% to 20% reduction in seasonal water use.

The two tributary sources generally provide a higher quality of raw water and they gravity-feed to the water treatment plant, whereas water from the City’s Noyo River diversion must be pumped. Stage 2 water restrictions include only watering on Tuesdays and Saturdays, no washing of streets, driveways, buildings or other hard surfaces, no free flowing hoses, no wasteful use of water, and water leaks must be repaired within 3 days of notification or discovery.

Restaurants shall not serve water except upon request and lodging establishments shall not provide patrons with daily laundered sheets and towels, if their stay is less than 3 days. For more information on restrictions please check the City’s website: https://city.fortbragg.com/474/Water-Conservation

(An earlier version of this story said the collapsed tunnel on the Skunk Train line was an issue with delivering water. The water delivery point for the city is actually east of the tunnel and it is not an issue, said Robert Pinoli, president, of the railroad line).