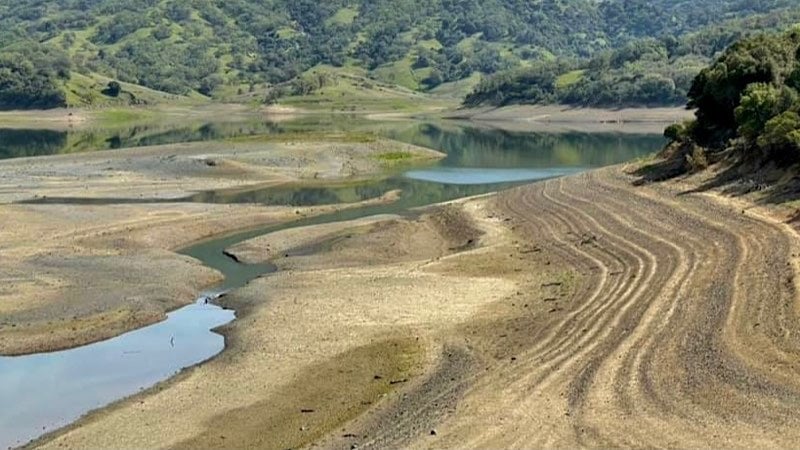 MENDOCINO Co., 4/20/21 — It’s no secret that our county, along with the entire state, is in a drought. Lake Mendocino is at a historic low, Fort Bragg’s main source of water is flowing at half its normal level, and Ukiah water manager reckons that parts of the Russian River may run dry towards the end of the drought year.

But what will that mean for Mendocino County residents? The short answer is that it depends where you live and who supplies your water. But if you want the long answer, you can keep reading. Here at The Mendocino Voice, we’re speaking to every water district manager in the county to find out what water security looks like from the hills to the ocean. In this story, an update on water security in Fort Bragg and Ukiah.

Fort Bragg water district customers may see restrictions on their water use come down the pipeline within the next few weeks, according to John Smith, director of public works for the City of Fort Bragg.

“Last year, 2020, was a challenge, but we made it through just fine,” said Smith. This year might be a little more challenging, but it’s hard to say.”

Fort Bragg’s water comes from three surface water sources — the Noyo River, Neumann Gulch, and Waterfall Gulch. The city uses water to provide approximately 900,000 gallons a day to its customers. The Noyo, which is the city’s main source, is currently flowing at around 20 cubic feet per second, according to Smith. But usually around this time of year the river flow is at least double that, around 40 to 50 cubic feet per second. Neumann and Waterfall are also seeing low flows, “shy of what we had last year,” according to Smith.

“It’s still dropping more so we’re not sure when that will slow,” Smith said. So although Fort Bragg has enough water for its customers to continue normal use for now, that won’t be the case for long. Fort Bragg’s 2,950 customers may start seeing constraints as early as May.

“As far as an emergency, it’s not yet,” said Smith. “That’s probably several weeks out.”

What exactly the restrictions will entail is still unknown, and Smith said that it will likely start with a letter to water users reminding them of best conservation practices. However, when asked if Fort Bragg will have to implement voluntary or mandatory water restrictions, Smith said “yes we are expecting to do both similarly to Redwood Valley and folks over the hill there.

Redwood Valley cut off all its agricultural connections on Monday and is expecting this summer’s water supply will be limited to health and safety uses such as cooking, bathing, flushing the toilet and the like.

Luckily, Fort Bragg does have some backup. But it’s not a lot. The city has a 45 acre foot reservoir around three miles east of Fort Bragg for emergency use which went online in either late 2015 or early 2016, according to Smith. Although the reservoir may help the city make it through the summer — and just as importantly, offer some peace of mind — 45 acre feet isn’t a lot of water for a district as big as Fort Bragg’s. Forty-five acre feet is equivalent to around 14 million gallons, so around two weeks worth of regular water use.

Thanks to over a century of foresight that has continued into modern day, the city of Ukiah has plenty of water. It sits happily atop a large aquifer and holds pre-1914 water rights, water rights that are over a century old, which means it has first dibs on a lot of the area’s water. In addition due to efforts by the city to increase water security in the aftermath of the 2014–2015 drought, Ukiah has a robust water-recycling program.

“I mean, this is going to be an extreme year and we’re definitely going to react to the situation in a responsible way — but I am not concerned about meeting our demand,” said Sean White, director of water resources for the city of Ukiah.

However, Ukiah is still going to switch things up this year in order to take pressure off shared water resources, including the Russian River and Lake Mendocino. This will alleviate some strain on surface water that districts, which are not as fortunate as the Ukiah, such as Redwood Valley, rely on.

“The real point of conserving this year will be to take pressure off of the [Russian] River and Lake Mendocino in particular, which is very low. So we’re going to rely on groundwater this year, for the most part. We’re gonna prioritize that source.”

Even though Ukiah has more than enough water to get them through the drought year, the seriousness of the drought is not lost on White. He anticipates that towards the end of the summer, parts of the Russian River, which provides water to residents in both Mendocino and Sonoma counties, may even run dry.

“The river is going to be really low. Again, lower than anyone’s probably ever seen it or the same since ‘77,” he said. “I would not be surprised if the Russian River at some point becomes intermittent in the late fall. If we don’t get some nice early precipitation, it’s going to be a rough year for a lot of folks. Some of the surrounding entities and agriculture are really going to have a rough year.”