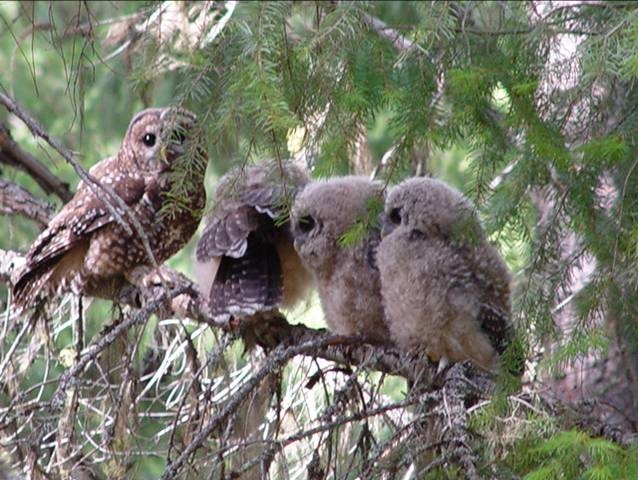 LITTLE RIVER, 1/15/2021 — In the final days of a presidency with a propensity for environmental deregulation, the Trump administration has re-designated more than three million acres of protected habitat for the threatened Northern Spotted Owl in northern California, Washington, and Oregon.

In northwest California, almost 300,000 acres that were previously listed as protected spotted owl habitat will now lose that designation, according to a document released from United States Fish and Wildlife Service. The Mendocino Voice is continuing to collect information to confirm where exactly the re-designated land in northwest California is and what agencies control the land — though it appears to all have been public land.

Fish and Wildlife released their decision to re-designate 3.4 million acres of critical habitat on Wednesday, January 13. The decision is set to take effect in around 60 days. However, the decision could be reversed by the incoming Biden administration. It is sometimes the case that policies will see-saw in the waning days of a presidency, as incumbents ram through pet policies, by executive order or administrative action, that are quick reversed by their successor. And with the unprecedented tumult surround this transition of power (perhaps the first non-peaceful transition since the Civil War) it is far from clear if these policies will stand.

One environmentalist described the re-designation as nothing more than a last minute gift from the Trump administration to the timber industry — one that has nothing to do with scientific findings. “What the Trump administration has done today is exactly the opposite of what the spotted owl needs,” said Noah Greenwald, endangered species director at the nonprofit advocacy group, the Center for Biological Diversity.

The document from the federal United States Department of Fish and Wildlife did not include any new scientific evidence to support their decision in re-designating the protected habitat. Rather, the author of the decision explained that Secretary of the Interior used his “discretion” in making the call. The document noted that the secretary “may exclude an area from critical habitat if he determines that the benefits of such exclusion outweigh the benefits of specifying such area as part of the critical habitat designation.” Essentially, despite what scientific evidence suggests about the importance of certain forested areas to the species, the secretary can decide to take away the lands’ protected designation based on his inclination to put more or less weight on a variety of factors, including economics, as long as he finds that the changes will not result in the species extinction.

Despite habitat protections allotted to the owl since the ‘90s, the species’s population has continued to decline over the years, according to information from the United States Department of Fish and Wildlife. Currently, the population is shrinking by 3.8% annually across the Pacific Northwest and Northern California, according to that same report.

The protection of the medium sized brown owl, which is covered with white spots and has large, dark brown eyes, has been contentious since it was first listed as threatened under the Endangered Species Act in 1994. This is largely because the owl prefers to make its home in old-growth forests, the same forests which hold older trees that are economically valuable to the timber industry.

According to reporting by the New York Times, the timber industry praised the Wednesday decision, saying that the rule will more adequately reflect the latest science, federal law and crucial spotted owl habitat.

But Greenwald said that the owls are possibly at a greater risk of extinction than ever before, and that this recent decision only puts them in a more precarious situation.

In fact, the Northern Spotted Owl is currently under consideration for relisting as “endangered” rather than just “threatened.” The species is being pinched not only by logging, but climate change and the Barred Owl, an invasive species that has infiltrated the spotted owls habitat. Greenwald said that the best way to protect the species is to protect the forests they call home. He also added that old growth forests, which are scarce, are an important habitat for other species and play a crucial role in stymying climate change, as they can sequester significant planet warming carbon dioxide. “Scientists say we’re in an extinction crisis, losing millions of species and the way we stop that is by protecting habitat,” he said. “Excluding these acres [from being protected] has consequences well beyond the spotted owl.

Follow this link to see a PDF ofthe full documents: