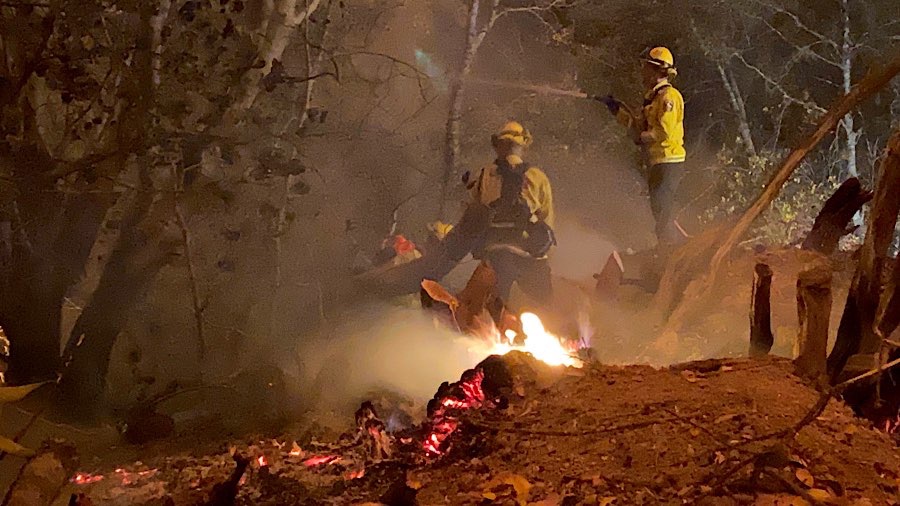 UPDATE 9/8/20, 11:45 p.m. — The Oak Fire has not grown significantly today, and according to Cal Fire’s evening update still stands at 863 acres, though containment has increased to 10%. The fire continues to burn away from Brooktrails and firefighters are setting up aggressive defenses in case forecasted strong northern and eastern winds shift the direction of the fire back towards more densely populated areas.

The fire’s lethargic behavior today has been largely attributed to the dense cloud of smoke (mostly from the August Complex fires) that has covered Mendocino County like a suffocating blanket. The smoke has dropped temperatures by perhaps 20 degrees and also stifled wind, creating far better fire weather conditions in the vicinity of the Oak Fire, while also damaging the lungs of all Mendocino residents.

Cal Fire confirmed earlier that at least two structures have been destroyed, and there are accounts from firefighters on the scene that property damage has been relatively limited. In the early stages of the fire, firefighters made great efforts to protect homes, given that the fire was burning through residential areas. However, other reports indicate that some number of out buildings have potentially burned down.

The evacuation areas remains mostly the same, but for more details it’s best to consult the sheriff’s Google Map:

The 101 remains closed, and may stay closed for some time. Earlier today a large tree fell across the road and blocked it for several hours and there is concern that trees will continue to fall, making the drive dangerous, and keeping the road closed.

People evacuating are asked to first go to Willits High School, and will then be directed to overflow centers. People evacuating to the north can go to Harwood Hall and Harwood Park in Laytonville.

Here is information on resources available for pets and large animals from the MCSO:

Animal Care has resources for larger domestic animals, horses, and livestock at the Willits Junior Horseman’s Association. Larger livestock can be delivered to 901 East Commercial Street in Willits for lodging.

Animal Care is also requesting donations of blankets, towels, and sheets for the disaster rescue station. These items can be donated at the Willits High School Agriculture Building. Other monetary donations for animal food can be made at JD Redhouse at 212 S. Main Street in Willits, California.

The Mendocino County Sheriff’s Office would like to thank the employees and personnel from Animal Care for coordinating this resource for citizens in the evacuation area. Any questions regarding the Domestic Animal Resources being offered for the Oak Fire can be directed to the Call Center at 707-234-6052.

UPDATE 9/8/20, 3:15 p.m. — Cal Fire spokesperson Tricia Austin provided some additional clarification this afternoon. Progress on the Oak Fire is good, and ironically aided by the thick smoke from the August Complex that has blocked out the sun and lower temperatures across the region. With this eerie cool weather, fire activity on the Oak Fire has decreased, allow firefighters an opportunity to build up containment lines.

The 101 remains closed and burning trees are present along a stretch. At least once today a burned tree fell directly across the road and had to be removed. This of course means that it could be sometime before the highway is reopened, and travelers should plan to take an alternate route.

Shelters are filling up and the County is expanding shelter capacity. If you need a shelter, check-in at Willits High but you may be directed to a secondary site.

Approximately 800 residential homes are currently threatened by the fire, however, this new number doesn’t include out buildings and the like.

UPDATE 2:15 p.m. — Cal Fire has released a midday update on the Oak Fire. That update shows that the Oak Fire at 863 acres and 5 percent containment, the same as this morning. Cal Fire has confirmed that two structures were destroyed.

Wind and smoke are hindering aircraft and there are currently no aircraft working the fire, which can impact the reliability of mapping.

Mandatory evacuation orders remain in place for most of 3rd gate, Brooktrails and Spring Creek areas. As well, for people residing on the east side of U.S. route 101.

See the map below for details from the MCSO:

Road closures may impact your evacuation routes. U.S. 101 north of Willits from Quail Bridge overpass to Shimmins Ridge Road is closed in both directions. There are also road closures in the Brooktrails and Willits area. Cal Fire Mendocino urges people to avoid the area to allow emergency vehicles to move freely.

Animals can also be evacuated to Willits High School.

“Right now the weather is about as bad as it could be for fires,” said National Weather Service Fire Specialist Jeff Tonkin. It is dry, windy, and hot and forecasted to stay that way for the next 24 hours.

“Crews continue to  complete and strengthen containment lines and prepare for forecasted winds out of the North this afternoon and Evening,” Cal Fire Mendocino wrote in their incident update.

UPDATE 10:40 p.m. — Hotels in Willits and other parts of the county are filling up. The sheriff recommends calling ahead to make sure there is space.

Also Howard Memorial is allowing use of its parking lot for RVs:

ORIGINAL
MENDOCINO Co., 9/8/20 — The Oak Fire, north of Brooktrails, has burned 863 acres, and fire crews have managed to establish containment lines around 5% of the fire, according to the most recent morning update from Cal Fire.

As of last night, the more accurate mapping had put the fire at about 700 acres, which means growth slowed significantly overnight, but about 3400 structures remain threatened. The fire began north of Brooktrails shortly after noon on Labor Day, September 7, and grew significantly over the next several hours, prompting escalating evacuations into the entirety of Brooktrails, and the closure of U.S. Route 101.

There have been no new mandatory evacuation orders issued since Monday afternoon, although no evacuations warnings or mandatory orders have been lifted, and almost all of Brooktrails remains under mandatory evacuation orders, with northern portions of of Willits under evacuation warning. Roads into Brooktrails remain closed, as does a portion of the 101 between SR-162 and the Willits Bypass, but travelers can use SR-1 to SR-128 as a possible detour. Willits Unified and Laytonville Unified schools are closed today, due to fire conditions.

Portions of Mendocino County remain under a red flag warning or a fire weather watch today, which means there is potential for high winds, with hot and dry conditions, which could mean increased fire activity.

Our coverage of the Oak Fire from September 7 can be found here. There is currently no official information regarding the cause of the fire available. Cal Fire has only confirmed that one structure has been destroyed so far, although scanner traffic indicated at least two structures were damaged early in the fire, and reports saw substantial damage to property along the 101. On Monday, fire crews have been focusing on aggressive structure defense and establishing containment lines.

Evacuations orders and maps: The Mendocino County Sheriff’s Office has created an updating map with evacuations, road closures, and emergency shelters, see here. Currently, Sherwood Road is closed at North Main Street and residents are not allowed entry into Brooktrails, and 101 is closed north of Willits to 162. Any changes will be updated on the Caldrons Quick Map, and we will keep you updated as more info comes in.

Shelters and more info: There is a 24/7 call line established for the Oak Fire at 707-234-6052, and COVID positive evacuees or those under quarantine or isolation orders should call 707-472-2676. Evacuations shelters established at Willits High School with an overflow location at Baechtel Grove Middle School. There is also a way station established at Harwood Park in Laytonville for people who evacuated to the north of Willits.