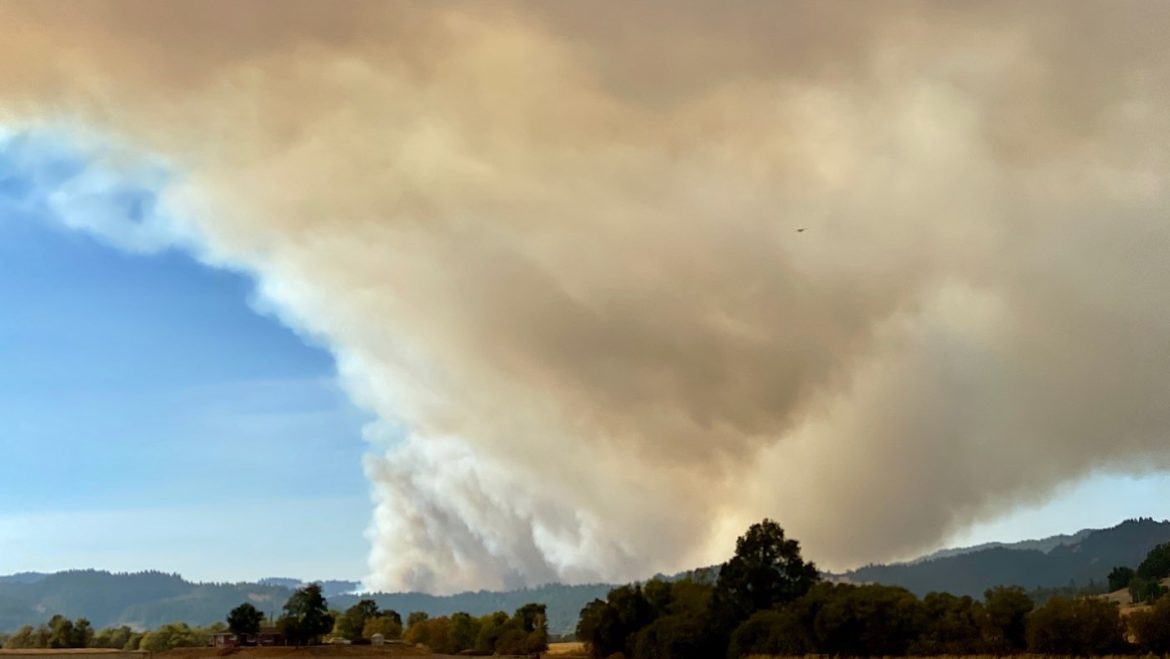 The Oak Fire as seen from Hearst Road (A.F. Baumann)

For the most recent coverage of the Oak Fire on September 8, 2020, see our newest article here.

UPDATE 9/7/20 9:15 p.m. — According to Cal Fire’s most recent update and more current mapping, the Oak Fire is approximately 700 acres in size, with no containment. There are 232 personnel currently working on the fire, including crews from a number of local departments, and additional resources have been requested. Fire crews are focused on aggressive structure protection and to construct containment lines. There are 3,400 structures currently threatened, but only one structure officially confirmed destroyed.

There are currently two evacuation centers open in Willits, one at Willits High School, and one at Baechtel Grove Middle School. Large animals can be taken to the Willits High location. There is also space set up for evacuees and large animals at Harwood Park in Laytonville.

A call center number has been established, at 707-234-6052. If you have other questions about the Oak Fire, or other questions about animals, including animals that may have been left behind during the evacuation, call this number. The Google map of evacuations and road closures provided by the Sheriff’s Office will continue to be updated at this link.

If you have tested positive for COVID-19, or are under quarantine or isolation orders due to the coronavirus but need to evacuate, Mendocino County can provide you with a different location for evacuation. Anyone fitting this description should contact the “Department Operations Center COVID-19 Shelter Hotline at (707) 472-2676” according to a press release from the County of Mendocino.

Both Willits and Laytonville school districts have shut down school tomorrow due to the fire.

UPDATE 7:45 p.m. — The fire has crossed Highway 101 a few miles north of Oil Well Hill, and has burned approximately 20 – 30 acres east of the highway, according to Justin Buckingham, of Ukiah Valley Fire, who was on the scene, who said that tonight on the Oak Fire will be “touch and go.” The air response is wrapping up for the evening. Highway 101 is currently closed between the north end of the Willits Bypass, and the intersection with State Route 162 to the north, and there is no entry into Brooktrails at this time, and no estimated time of reopening for either road.

Willits High School Farm is the evacuation center, and if overflow is needed, evacuees will be sent to Baechtel Middle School. All evacuations and road closures, as well as the evacuation shelter, are being updated on this Mendocino County Sheriff’s Office map. According to Laytonville Water District manager Jim Shields in an email, for evacuees that north went to Laytonville, “the Water District, Healthy Start,
and Harwood Park Association have set up a traveler comfort station in the
Harwood Park lot, including water for livestock and horses.”

All Willits Unified schools will be closed on Tuesday, August 8 due to the fire conditions, according to a Facebook post shortly before 6 p.m.

UPDATE 6:30 p.m. — The areas under mandatory evacuation order have not changed, however, evacuations warnings have been extended to the west, north, and east. As of about 6:15 p.m. about a dozen aircraft were working the fire.

UPDATE 5:45 p.m. — The Oak Fire continues to grow in size and is forcing new mandatory evacuations. Almost all of Brooktrails is now under a mandatory evacuation order, with the evacuations zone extending somewhat into Willits city limits, but not actually affecting any residential areas of Willits. The fire was last estimated at about 1000 acres and remains 0% contained.

U.S. Route 101 is closed at the northern end of the Willits Bypass, and traffic is being rerouted into Willits. A major traffic back up has occurred. There is a report that the fire “slopped over” the 101. According to Sheriff Matt Kendall firefighters managed to stop that spot fire and substantial spreading east of the 101 has not occurred.

Willits High School has been designated as an evacuation center and efforts are being made to remain COVID safe, but evacuees should remember to attempt to maintain some social distance and to wear masks.

The Mendocino Sheriff’s Office (MCSO) is updating the map below, and it’s the place to check to see if you are in an mandatory evacuation zone (in red) or in a warning area (in yellow).

Willits Police Department personnel and Mendocino County deputies are responding to a variety of calls in Brooktrails, from people who need assistance evacuating, including several elderly people and some disable individuals. Additionally, officers are responding to calls of people who are refusing the evacuation order.

Cal Fire continues to hit the fire with everything it’s got from the air, bringing in Hercules C-130s as well as the 747 supertanker. Great efforts are being made to create containment lines in anticipation of difficult fire weather forecasted for tonight.

And local fire departments, as well as multiple prisoner hand crews are working hard on the ground to create containment lines.

UPDATE 4:45 p.m. — The Oak Fire is now at 1000 acres in size, with zero percent containment, according to Cal Fire’s most recent estimate. There are 83 personnel on the fire, and additional resources have been called.

The Mendocino County Sheriff’s Office has now included road closures on the map of evacuation orders and warnings, see here. Mandatory evacuations have been expanded to include the following (see Nixle alert here):

UPDATE 3:45 p.m. — The oak fire continues to grow aggressively and has now reached at least 200 acres in size, and has forced evacuations from Sherwood Road north, and on both sides of the 101. The 101 is closed at Reynolds Highway in both directions, and people are not being allowed into the areas under evacuation.

The MCSO has put out a detailed map on Google Maps, which appears to be updated regularly, and is a good resource to check as the fire continues to grow.

Firefighters are throwing a lot of resources at this blaze, with at least four copters and three tankers, including a C-130 Hercules VLAT making drops on the fire.

UPDATED 3:15 pm: Evacuations have expanded once again on the Oak Fire, as the situation has continued to change rapidly since the fire’s start. The newest map of the areas under evacuation can be seen at this link, and in the tweet from MCSO below.

According to scanner traffic, vehicle traffic is currently being controlled at the intersection of Sherwood Road and Main Street in Willits — no additional vehicles are being allowed into the area, and people leaving are being informed they will not be allowed to return under the fire is more controlled. There are several reports of people who are resisting evacuating on the scanner, including one resident who did not leave until the fire had reached their yard. Given that roads in Brooktrails are extremely narrow and there are limited access roads, please use caution and leave quickly if you are under evacuation or feeling unsafe.

3pm: The Sheriff’s Office has provided a map of the evacuation area, visible at this link and below:

UPDATE 2:50 p.m. — The mandatory evacuation order for the Oak Fire has expanded — boundaries now include Shimmins Ridge as the northern boundary, east of Highway 101, approximately one mile, and south to Reynolds Highway.

The fire has been spotting and conditions are challenging, and it is currently at 50 acres and growing with no containment., with the fire “pushing really hard” at points, according to scanner traffic. Cal Fire has issued an incident report describing the fire as “burning in a mix of grass, brush, oak, and pine trees,” with crews “working in extreme conditions high heat, low humidity, with the potential for erratic winds.” The full incident report is included below.

If you are feeling unsafe, it is best to leave regardless of whether you have received an order, and please avoid the area if possible as fire crews are responding to quickly changing conditions in difficult to access areas, on narrow roads as residents evacuate. Additional resources are also being called to the scene.

UPDATE 2:20 p.m. — The Mendocino County Sheriff’s Office has expanded the evacuation orders for the Oak Fire to include Schow Road south to Ryan Creek Road, and also the area of Boogi Woogi. The full Nixle alert for the evacuation order is below — an order is mandatory and means there is a severe threat to life or property.

Residents should leave via whatever route they deem safest. An evacuation center is being established at Willits High School on N. Main Street in Willits, and deputies and fire crews are going to residences to assist with evacuations.

According to Cal Fire Mendocino Unit Chief George Gonzalez on Twitter, the temperature is currently 102 degrees with 16 % humidity. These conditions can lead to a quick rate of spread and present challenges to containing the fire.

MANDATORY EVACUATION FOR THE AREA OF BIG JOHN RD, SKYVIEW RD, THIRD GATE RD, AND SCHOW RD SOUTH TO RYAN CREEK RD. ALSO THE AREA OF BOOGI WOOGI. EVAC CENTER IS BEING SET UP AT THE WILLITS HIGH SCHOOL. USE BEST JUDGEMENT WHEN LEAVING, DRIVING AWAY FROM THE FIRE.

EVACUATE SAFELY AWAY FROM THE FIRE. EVACUATION CENTER BEING ESTABLISHED AT WILLITS HIGH SCHOOL.

UPDATE 2:02 p.m. — The fire has now burned between 45 and 50 acres and destroyed two structures. And firefighters say that it has potential to grow a couple hundred more acres.

Firefighters are now asking for new evacuations for areas west of the 101 and south of Schow Road down to the areas already evacuated.

UPDATE 1:10 p.m. — The fire has now grown to at least 25 acres, and has a moderate rate of spread. New evacuations are being asked for, and structures are threatened.

WILLITS, 9/7/20 — A wildfire is burning north of Brooktrails with a fast rate of spread, has burned about five acres, and is already forcing mandatory evacuations. The fire is burning in the area between Third Gate Road and 1st Gate Road, along Big John Road. The smoke plume is clearly visible from Willits.

Here is the text of the Nixle alert from the Mendocino County Sheriff’s Office:

The fire is moving north, burning along the east facing slope of a narrow canyon with Outlet Creek at the bottom and U.S. Route 101 on the opposite side of the canyon across from

Aircraft from Cal Fire and apparently the Forest Service have responded, and it appears that additional aircraft may be on their way from Sonoma County. Firefighters are continuing to call for more engines and resources — though of course firefighting forces are stretched thin across the entire state, including in Mendocino County.