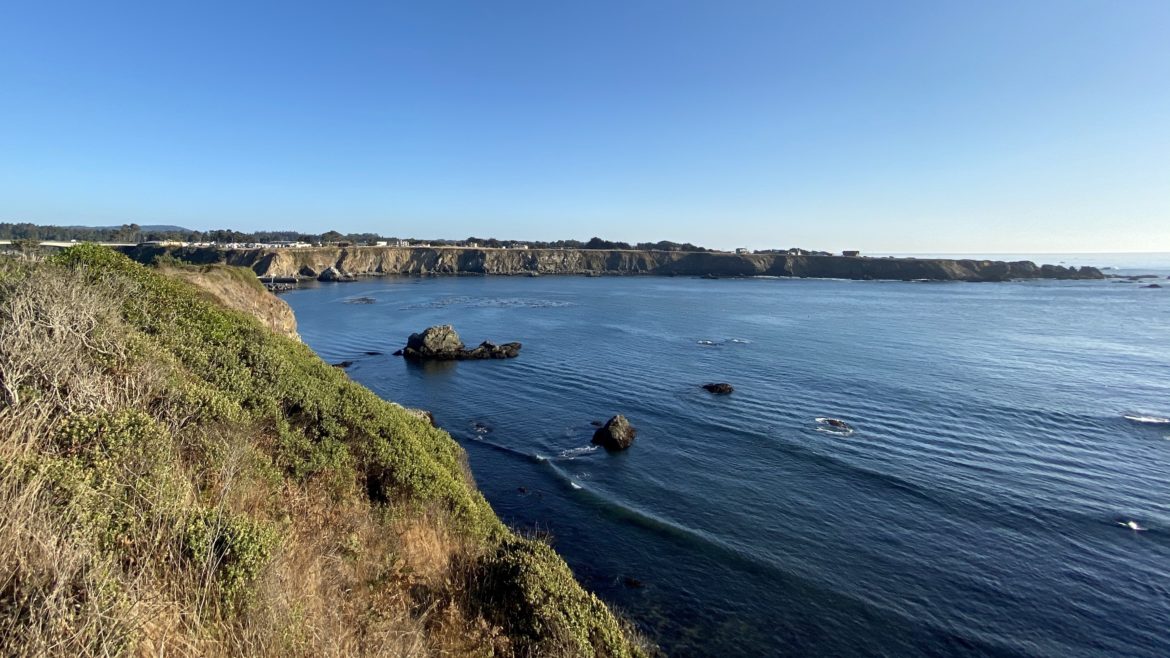 MENDOCINO Co., 9/6/2020 — Fort Bragg is running low on water. On Monday, August 31, the City declared a stage two water emergency, asking all municipal water users to cut their usage by 20 percent. Specific restrictions include no watering lawns, no washing sidewalks, irrigating gardens between the hours of 10 a.m. and 6 p.m., washing the exterior of any building, filling a swimming pool, and more.

These restrictions and the water shortage may seem extreme, but climate scientists say such situations will inevitably become more common as the planet warms, and California’s rain cycle becomes more erratic. Norman Miller Ph.D., a professor who researches climate and drought at UC Berkeley, explained in an interview that because the future will be hotter, and have more inconsistent weather and precipitation patterns, water availability will continue to be challenging to predict and water security difficult to provide.

Starting in mid-July, the flows in the Noyo River began dropping faster than in any other summer on record. The river flow is below 2015 low flows, when the entire state was in a drought emergency. John Smith, director of Fort Bragg Public Works, said staff had never before seen water levels in the Noyo drop so precipitously.

Smith and Miller wrote in their agenda item summary, “Mendocino County is currently experiencing a severe drought, providing a strain on our water sources.” The City Council voted unanimously to declare a stage two emergency.

During a phone interview, Smith explained that the City of Fort Bragg relies on three water sources for it’s municipal system. Waterfall Gulch, which is a tributary to Hare Creek, Newman Gulch, which is a tributary to the Noyo River, and the Noyo River diversion at Madsen Hole. There is one line that combines the water sources and goes to the city’s water plant, which is on Jere Melo Street.

Smith said staff expect flows to continue to decrease through September and October. Despite this, he said he does not expect Fort Bragg to have to move beyond a stage two water emergency and put more restrictions on municipal water users.

This is partially explained by the tides. When river flows are too low and tides are high the salinity in the water is too high to use. In the middle of September, high tides will come in and likely have this effect, but very high tides are not expected for a few months after that, which will keep the water from becoming brackish, even with very low flows.

Smith said they expected low flows this year due to the particularly dry rainy season, but didn’t anticipate that the water would be this low this early.

What does the future hold?

Jay Lund, a professor of civil and environmental engineering at UC Davis, specializes in water resources agrees with Miller, explaining that as the world continues to get hotter, water availability will decrease

“Well it will be a warmer climate, that will affect how much people use water for cooling and outdoor water uses, landscaping and the like. The warmer climate certainly for the snowmelt hydrologies in California are gonna shift water availability to be more in the winter and less in the spring and summer. The generally warmer temperatures will increase water losses from plants, evaporation and evapotranspiration.” With more evaporation and evapotranspiration, there is more water leaving watersheds and less available for human use.

“There are a lot of low hanging fruits that people are aware of but don’t practice,” said Miller. “The big one is water efficiency. How do we implement water use efficiency? How do we create means for low water usage?”

Miller believes that systems such as recycling water and reflecting heat of buildings to reduce cooling needs could help lessen the blow of future unpredictable water sources. “We could build resilience to what we are expecting in the future and to what we are experiencing right now, for that matter,” Miller said.

Although water management can provide support during low water years, it’s not the only answer. John Smith said this year water usage in Fort Bragg is lower than usual, yet a stage two water emergency is still necessary.
Stage two water conservation measures prohibit using water without a shut-off nozzle, washing driveways, sidewalks, or the exterior of buildings, and irrigation for lawn or aesthetic landscaping. Irrigation for gardens and agriculture is only allowed between 6 p.m. and 10 p.m. and is not allowed within 48 hours of rainfall, and restaurants are only allowed to serve water if requested. Additionally, hotels must encourage visitors to waive daily linen service. Those who do not follow these rules can be fined. A full list of stage 1-4 water restrictions can be found on California Rural Water Associations Website.