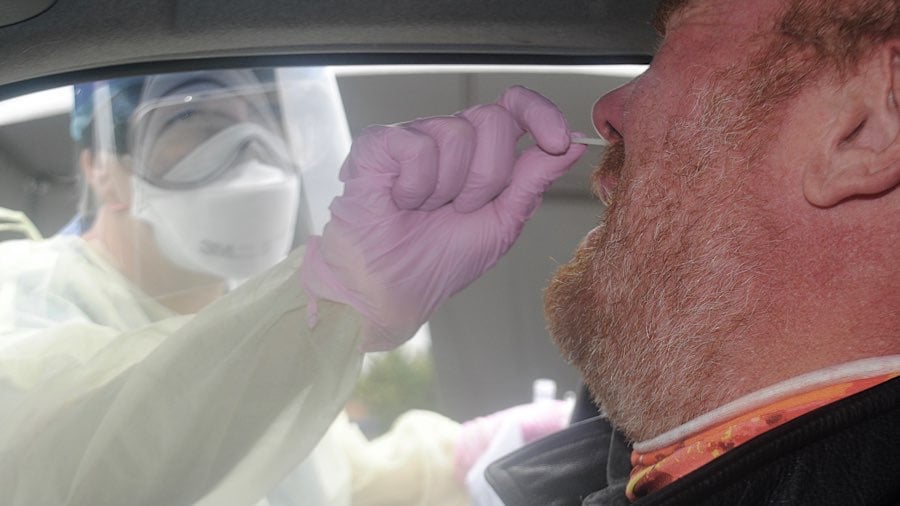 Publisher’s note: If you live on the Mendocino Coast and would like to see more reporting like this from Coast-based freelancers, consider supporting local journalism by becoming a member (we’ve recently made it much easier, just click the link). And when you do, write us a note telling us you want more Coast reporting. If we get enough members on the Coast we’ll be able to hire a full-time Coast correspondent.

Note: Freelance reporter Frank Hartzell took the surveillance test on Aug 5 (for those not experiencing symptoms of COVID-19) offered weekly by The Mendocino Coast Clinics, so he could describe what it felt like, why it is needed and to explore delays in testing results. Frank found a flowing local system where it took 13 minutes to get a drive through test done, with two other cars passing through in that same time-frame. MCC is managing to do 100 tests per week in just two intense half days. Actually getting tested was also efficient, clean, friendly and felt safe, with two people working at a furious pace, never touching people or cars and maintaining all the safety protocols. Behind the scenes, management has been working hard to deal with overwhelmed state laboratory systems. Yet, the community never wavered, with a waiting list beyond the 100 slots needed, despite reports of results not coming back or being very late. The surveillance testing program will continue at least through August.

Lucresha Renteria, executive director of MCC, has been working together with the county on improving the time frame for the return of test results from the state. Last week, the state revealed its main system for communicating lab test results, called CalREDIE, was woefully behind in reporting county information back to the state and to the counties. The system, set up to record all infectious disease data, has been overwhelmed by the volume of data that COVID-19 produced, officials said.

At the same time, the UCSF laboratory announced it was adjusting its testing figures, releasing backlogged test results, which also skewed the figures, according to Mendocino County health officials.

First, all 100 (negative) results from the last week in July (Wednesday and Thursday) came back by Aug. 6., Renteria said. More results continued to come in since. The good news amid the state issues and confusion is that one is now more likely to get results back in a useful time frame, now that the hidden problem has been exposed.

FORT BRAGG 8/12/20 — Having lived 56 years I figured I had felt all the physical sensations possible, from the sharp pains and pleasures of youth, to those new dull, sleepy aches of middle age.

The COVID-19 diagnostic test I took Wednesday at the Mendocino Coast Clinics was something novel, like the virus itself. Not better or worse, just weirder and more intense than I expected. The swab must go way up inside of your nose to where the virus can hide.

Jessie, the MCC nurse who did my test, couldn’t have been quicker or gentler in pushing the cotton swabbed q-tip up up my right nostril. And don’t say she didn’t warn me;

“The swab goes through your nose to the back of your throat. I keep it in for about 10 seconds. I do some twisting and turning so it will be very uncomfortable. Some people’s eyes will water and some people will sneeze,” Jessie said.

Then she got verbal consent, had me blow my nose and did it very quickly, providing a countdown from 10.

“Eye watering and amazing!” I exclaimed amid the bizarre tickling when the long swab came out.

Jessie said my description was a first ever.

What do people usually say?

“We won’t repeat those,” she laughed.

Diagnostic testing throughout the county was more than 18,000 when I was doing my test, with the latest figures showing about 87 percent coming back negative, 11 percent pending and 363 positives (as of Aug. 6), for about 1.9 percent positives.  Then it was revealed that testing numbers might be skewed due to the state’s mishandling of testing results.

At MCC, as of Aug. 6, 1500 test results had come back from its surveillance testing like the one Aug. 5, where my partner Linda and I got tested, with zero positive results having been found.  The recent releases of backlogged information had not yet been tallied into the system. There was one positive test that emerged from the 186 tests at a community surveillance testing event held at the Catholic Church on Harold Street in Fort Bragg on July 19, Renteria said.

One can currently get tested by getting on the waiting list at the Mendocino Coast Clinics. Call 707-964-1251 or email [email protected] to be put on the waiting list. But why would you? And what happens if you do test positive? How long do results take?

Let me start at the beginning of our testing. Hopefully the end won’t be me locked in the bedroom for 10-14 days.

Eva, the scheduler for MCC, was very helpful and explained everything clearly. Surveillance testing is only for those not having any symptoms of COVID-19. If I was having symptoms, there was a whole different process available, Eva said. I was not. In fact, having practiced so much masking and social distancing, I haven’t had any colds since this all began. Happily, flu and cold viruses have been among the “victims” of society’s efforts to stem the spread of COVID-19.

Eva said it was important not to arrive early or late, but as close to my time as possible to prevent lines forming at the always busy clinic. The planning worked. There were three cars ahead of us when we arrived at 11:08 a.m. to be tested. We drove out at 11:21 a.m. Behind me, were three more cars moving through the process. A masked woman was the first to greet us. She stood more than 6 feet from our window and took our names and DOBs and sent us to the next station. There we met Jessie who wore scrubs, mask, plastic face shield, head gear and gloves. She took the gloves and other items off every time she did the tests and scrubbed and put on new gloves. She took the test kits back to a table, closed up the contaminated vial and bagged and placed it directly into a cooler before washing her hands and re-gloving between patients. A man sitting at the table handed her the next kit, quick as passing a baton, sanitizing before and after.

Jessie never touched us or anything in the car, despite the tricky business of swabbing the throat through the nostril. The  brief discomfort was nothing an adult should worry about. The experience was clean, professional, fast and felt very safe.

Linda, who broke her nose as a girl and has no middle cartilage, was more stoic than I  with a single “wow” but had mild nose tingling for several hours afterwards.

While OptumServe provides the main testing services for the county, with regular testing in Ukiah, the health clinics have a special program for free testing. The county has an agreement with UCSF, which has obtained a grant which allows all the county’s community health centers, including MCC, to give the tests for free through the end of August. The UCSF grant pays for 350 tests per week at four Mendocino County community health clinics, including MCC, Long Valley Health Clinic, Redwood Coast Medical Services (on the south coast) and Anderson Valley Health Center. Renteria said the four clinics work together to share the surveillance tests, with MCC getting 100 of those per week at present. UCSF also does testing for other health facilities around Northern California.

Renteria said there has been no word so far on UCSF’s grant being continued into September. If it does not get extended, people will need to submit insurance papers or prequalify for programs for low income people that will allow for continued no cost testing.

For me (and everybody else who went) a positive test could both save lives of others and of course turn our lives upside down along with those of everyone we know. In that event, a phone call from a  contact tracer would come in. I would be asked to give the names of all the people I came in contact with. They would in turn be contacted by the contact tracers for possible testing or quarantine.

Why do surveillance testing?

Renteria says the testing is important because it finds if the virus is spreading in the community unseen. Putting people into quarantine literally takes the virus out of the community. The more people tested, the greater the community control of the virus is possible.  It seemed worth it, even if part of me really didn’t want to know.

For those showing symptoms of COVID-19, the clinic has begun using a new machine this week that gives results in 15-20 minutes from Abbott Laboratories.

MCC’s Abbott Laboratories testing machine is only for testing symptomatic people. There are well publicized problems with false negatives from these machines and a second process is used to double check those results.

A bigger problem with Abbott Labs machines nationally is that cartridges are unavailable for purchase for the next 3 to 4 months, according to media reports. The state provided this machine to the county, which chose to house it at MCC in Fort Bragg because Fort Bragg was having new cases come in and because MCC was actively testing already, with the protocols that I saw working, Renteria said.  The machine came with 288 cartridges, which is supposed to be a three-month supply, Renteria said.

The Abbott labs machine test is apparently much less exciting for the consumer than the surveillance test I took. Renteria said it was simply nasal swabs in both nostrils, not a nasal probe. There are three types of testing done for COVID-19. Surveillance testing is for those without any symptoms. There is also the diagnostic testing for those with symptoms, also done through the nose. The third type is blood-based antibody testing. Antibody testing reveals those who have been exposed to COVID-19 and recovered. All the 18,000+ tests recorded by the county are diagnostic tests.

(The Mendocino Voice in addition to interviewing Renteria, utilized the regular health report broadcast Thursdays at 9:30 a.m on KOZT radio.)