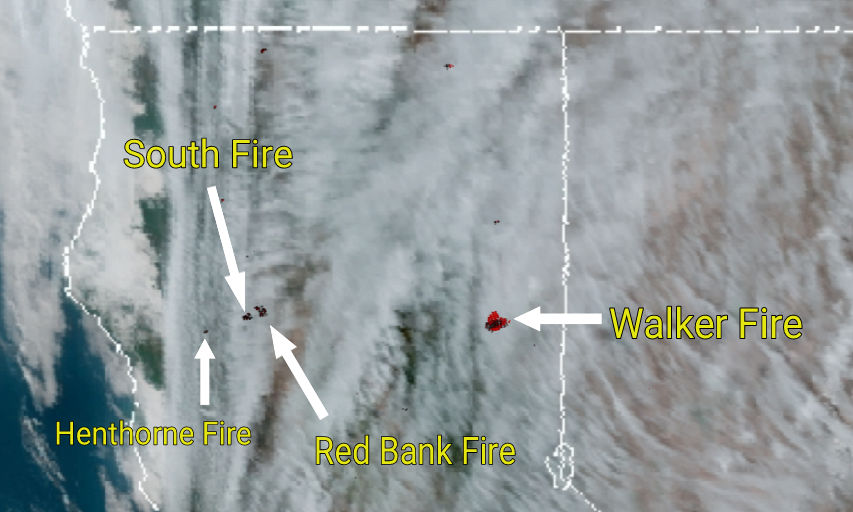 A satellite image of Northern California, and Nevada, and part of Oregon, with the various active fires labeled, taken around noon, Pacific Time, on Sept 7, 2019.

ORIGINAL
MENDOCINO Co., 9/7/19 — The Henthorne Fire, which is burning about 15 miles north of Covelo, did not grow in acreage overnight and firefighters strengthened containment of the fire to 10%. You can see our previous coverage of the fire here and here. There are 329 people working on the fire and 24 engines — and with the fire burning so in such a remote area, there are no structures threatened. The fire is burning just over the county line in Trinity County, but is being accessed through Covelo and Mendocino County.

The remote area in which the fire is burning caused some initial difficulties in reaching the fire, but once firefighters made access they quickly got to work and began establishing various kinds of containment lines by the evening of the first full day the fire was burning. Of course these lines are often built up in stages, with initial lines cut by hand-crews, and then later widened by bulldozers, with hose-line laid, until the fire can be said to be fully “contained,” such that there is a very small chance of its extending beyond the areas already burned. So whatever the percentage of the fire that has been surrounded, as of today firefighters are only confident in saying that 10% of the fire has a line around it that can’t be jumped.

Still the fact that the fire has not grown since yesterday evening is a good sign.

The forecast for the next few days shows a cold-front coming in, bringing lower temperatures and breezy winds. And fire-cam footage of the region where the fire was burning, which showed a large plume in past days (and can be viewed at this link), shows no smoke plume and low clouds as of time of publication.

Further afield the lightning fires sparked three nights ago continue to burn, with the Red Bank Fire about 27 miles east-northeast of the Henthorne Fire, hitting 7,754 acres this morning with 9% containment; and the South Fire, which is some 20 miles east-northeast of the Henthorne fire, growing to 1,665 acres, with 0% containment. All the way on the eastern side of the state in Plumas County, the Walker Fire exploded up to 24,040 acres with 0% containment. That fire is burning in federal lands and is not being managed by Cal Fire.

The smoke forecast below shows that we should not be expecting substantial smoke in most of Mendocino County, with perhaps a bit blowing over Covelo. However, other parts of the state will be seeing some terrible air quality conditions:

Here is a temperature forecast: