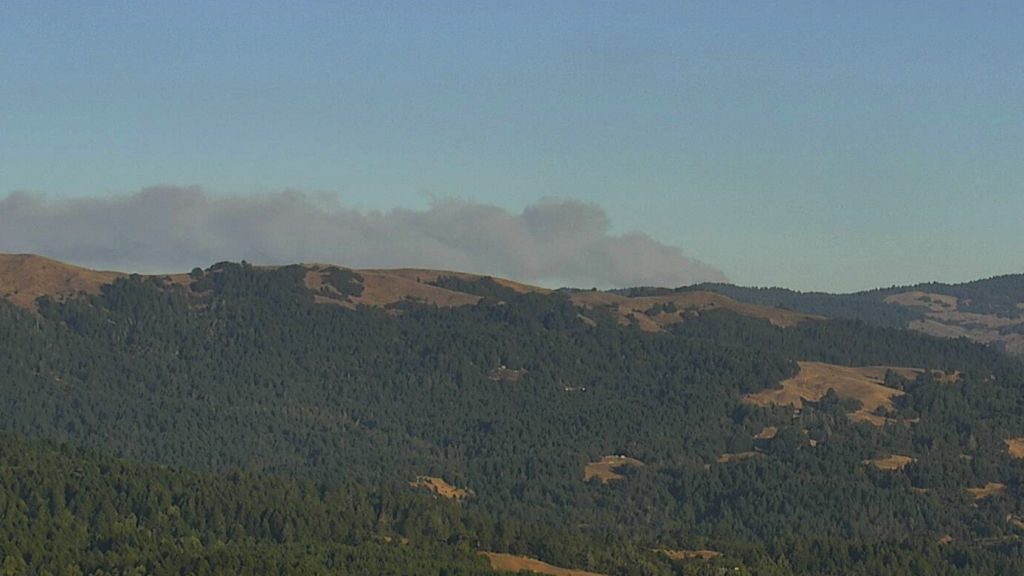 A view of the fire from a forest camera. The camera is pointed southeast, at an unknown distance from the fire.

UPDATE 6:50 p.m. — The fire burning north of Covelo, still called just “Fire 1-1” has grown to 100 acres and still has no containment. The fire is burning in an extremely remote area, about three hours north of Covelo by truck and then another mile and a half hard hike in.

The blaze has spotted onto National Forest land and that 100 acres figure is for both the original and the spot. The Forest Service is coordinating with Cal Fire on fighting the fire and the forest service has sent the Big Bear Hot Shots into to help combat the blaze. Satellite data we’ve found seems to show the fire burning just over the county line in Trinity County, in the Yolla Bolly Wilderness.

Below is a map showing red dots where satellites have picked up hot-spots, indicating a fire. This data may not be entirely accurate, and is developing, but it gives you a good idea of the general area where the fire is. The dots don’t correspond to actual fire size:

On their website Cal Fire list this as not a Cal Fire incident, but they have been on the scene fighting it. They also list the acreage as 80 acres, while a spokesperson for the Forest Service told us in an interview that the size of the blaze was 100 acres.

We’ve also found a very useful resource at https://firemap.sdsc.edu/ which is a set of maps with data layers built by the University of California, San Diego, with several partners. This map has a very frequently updated satellite picture of the western United States, in which you can clearly see the smoke of several fires, blowing north. The fire in question is on the one on the left, the ones to its right are in Tehama County.

Smoke is visible in Covelo, and points north, and the smoke appears quite large from town. Here are a couple photos taken by some of our readers around 6 p.m.

UPDATE 6:00 p.m. — The fire burning north of Covelo, still called just “Fire 1-1” has grown to 100 acres and still has no containment. The fire is burning in an extremely remote area, about three hours north of Covelo by truck and then another mile and a half hard hike in. The blaze has spotted onto National Forest land and that 100 acres figure is for both the original and the spot. The Forest Service is coordinating with Cal Fire on fighting the fire and the forest service has sent the Big Bear Hot Shots into to help combat the blaze.

Smoke is visible in Covelo, and points north.

UPDATE 4:00 p.m. — The small fire burning in a remote area north of Covelo has grown to at least 15 acres with 0% containment, and Cal Fire is calling it the “1-1 Fire.” The blaze is very remote, burning in extremely rugged terrain, and no communities or structures in the area being threatened. The fire is burning near the Mendocino-Trinity county line, in the northeastern area of the county.

Both air tankers and helicopters have been making the flight to the area, making retardant drops, sometimes taking off from Ukiah, or points south, and in the case of the helicopter, also from Covelo. This means that many people have seen this air-traffic, and some have contacted us, but the fire remains very far from posing a danger to communities.

According to Battalion Chief Paul Duncan of the Cal Fire Mendocino Unit, accessing the fire requires a three hour drive north from Covelo, followed by a steep and difficult mile and a half hike to the actual blaze.

The “helitack” crew is on the scene, on the ground. This is a group of firefighters who fly into fires via helicopter, and are often the first on the scene, and sometimes the only people on the ground for some time, if the location is difficult to drive to. However, he assured that a large order of resources has been sent to the fire, and they are making their way up. Even so, the fire is very likely to continue to grow before firefighters can get a handle on it, and smoke will potentially become visible as some point north of Covelo.

The cause of the fire is not known, and Duncan explained that Cal Fire does not speculate in these cases, but given the lack of roads or structures in the area, and the overnight thunderstorms, a lightening strike or other natural cause seems likely.

About 40 miles to the east in Tehama County, west of Red Bluff, there is a 40 acre fire called the Red Bank Fire. That fire also has a substantial number of aircraft fighting it, and it is possible that aircraft will be flying back and forth, crisscrossing the area of northern Mendocino County, to fight both these fires, so expect some continued air traffic.

ORIGINAL
MENDOCINO Co., 9/5/19 — Two small vegetation fires are burning in the extremely rugged country north of Covelo, near the Trinity-Mendocino county line. Cal Fire has responded with aircraft and has sent ground resources, engines and firefighters, to the scene, though it is extremely remote and has taken some time to get to. The fires were potentially caused by lightening strikes, as there was lightening in that area overnight, but this has not been confirmed.

The fire is burning very near the Mendocino National Forest, but a spokesperson for the Forest said that the fire is not in their response area, but in Cal Fires.

Fire Chief Paul Duncan explained that there were two fires, one just a single tree with some of the vegetation around it. The other fire was at about one acre as of earlier today, though it has some potential to expand. The Cal Fire “Copter 101” is on the scene, and ground resources are making their way out, though the fire appears to be at least an hour north of Covelo by ground.

We’ll continue to update, but at this time the fire does not pose any danger to nearby communities.

Here is an image of Copter 101’s path over the fire: