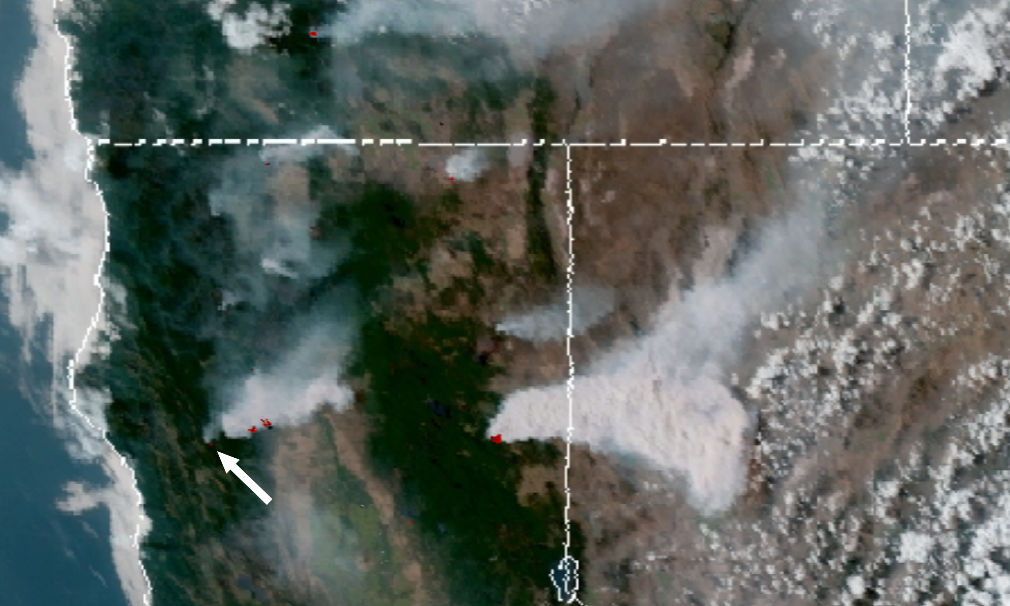 This is a satellite photo of northern California, Nevada and southern Oregon, showing several of the large fires. The Henthorne Fire is denoted with an arrow.

UPDATE 9/6/19 6:15 p.m. — The Henthorne fire has grown just over 60 acres since this morning’s estimate, but some progress has been made on establishing containment around the blaze, with firefighters getting 5% containment according to the most recent update. No structures are currently threatened. A unified command has been established between Cal Fire and the United States Forest Service (USFS), due to the fact that the fire is only partially on federal lands, meaning both agencies are sharing in the firefighting duties and coordinating.

There are currently 11 crews, 24 engines, five dozers, and eight water tenders on the scene, for a total of 329 personnel. At least two air tankers were circling the area during the afternoon, and USFS’s Public Affairs Officer Punky Moore confirmed that retardant was dropped on the fire today.

It is estimated that about 50 acres of the fire are located on National Forest land, with the rest burning BLM land, according to Moore. Fire crews are working in a remote area on steep terrain, making fighting the fire more challenging. The fire has been “torching and spotting through heavy dead and down timber and brush,” and Moore. She added that a cooling trend is foretasted for the weekend, which could bring breezy conditions which could result in more spotting. According to the Forest Service the “fire is spreading westerly toward state land” and the forecast currently predicts “breezy southerly winds.”

Moore noted that the fire can be accessed by road, but is in a remote location, and it takes time to set up the logistical support necessary to fight the fire — during the East Fire in the Yolla Bolly Wilderness this June, the agency used mules and air drops to access the scene. The Cal Fire press release from this evening also notes the “extended response time” it took for crews to reach the fire.

The fire is expected to be contained by September 14, 2019, according to Cal Fire’s afternoon fact sheet.

The USFS press release puts the size of the fire at 291 acres, and the Cal Fire afternoon press release timestamped from 4:30 p.m. describes the fire as 230 acres in size, but Cal Fire Battalion Chief Ryan Smith said that size was based on estimates from Friday morning, and Moore confirmed the USFS estimate was from Friday afternoon.

Here is a satellite photo of the various fires in Northern California and southern Oregon, the arrow indicates the Henthorne Fire:

ORIGINAL
MENDOCINO Co., 9/6/19 — The wildfire, previously called 1-1 Fire, burning about 15 miles north of Covelo, has reached 230 acres, and firefighters are still listing an official containment of 0%, and is now being called the Henthorne Fire.

However, a spokesperson at the National Forest explained that firefighters have made good progress and established substantial control lines, and do not expect the fire to expand these control lines, if they receive sufficient resources.

Cal Fire air tankers continue to make retardant drops on the fire, and the smoke plume, while still showing, is smaller today than yesterday. This continued effort by aircraft mean that people in the flight path, from the airport in Ukiah through Covelo, should expect to see continued air traffic through the day.

Smoke has started to drift into the lower valleys of Mendocino County, but that smoke does not mean a new fire has broken out, it’s drifting over from the fires in Trinity and Tehama counties. Here is a Facebook post from Brooktrails Fire:

The fire is burning about 15 miles north-northeast of Covelo at the county line between Trinity and Mendocino counties. The fire appears to be burning directly over the line in Trinity County, but access to the fire is being made through Mendocino County, and control of the firefighting efforts appears to lie with the Cal Fire Mendocino Unit.

The fire spotted yesterday, and 50 acres of it are in the Mendocino National Forest, in the Yolla Bolly Wilderness, while the rest of it are outside of the forest. This led to some confusion yesterday in communicating to the public about who was in charge of the fire — but the Forest Service explained this morning that the fire is indeed being managed by Cal Fire.

This fire along with many other small ones, and at least two larger fires, appear to have been caused by lightning, including at least one more last night.

About 20 miles east of the Henthorne Fire, in Tehama County, burns the “South Fire” which stands at 200 acres, and 0% containment. And just some six miles beyond that the Red Bank Fire has burned 6500 acres and is only 5% contained, making it the largest wildfire currently burning in California.

The terrain is extremely rugged, with access to the fire lying about 3 hours north of Covelo by truck, followed by a mile-plus hike over steep terrain. Firefighters face other issues today, including narrow roads, making transport difficult and an abundance of snags. A cold front is expected to be arriving soon, bringing the possibility of high winds, which would further complicate firefighting efforts across the region.

The smoke from both blazes had substantially died down this morning, as is visible in these satellite images. The first is yesterday afternoon, the second this morning.

The fires to the north, in Trinity and Tehama counties, have resulted in firefighters from across the region being mobilized, and as a result local volunteer departments have shifted over to manning Cal Fire stations.

You can see in the following tweets from the National Weather Service’s various local offices that the lightning strikes over the past days have been quite dramatic.

You can see in these maps posted by the Medford, Oregon office of the NWS, that this lightning event took places across multiple states and was the largest of the year so far: