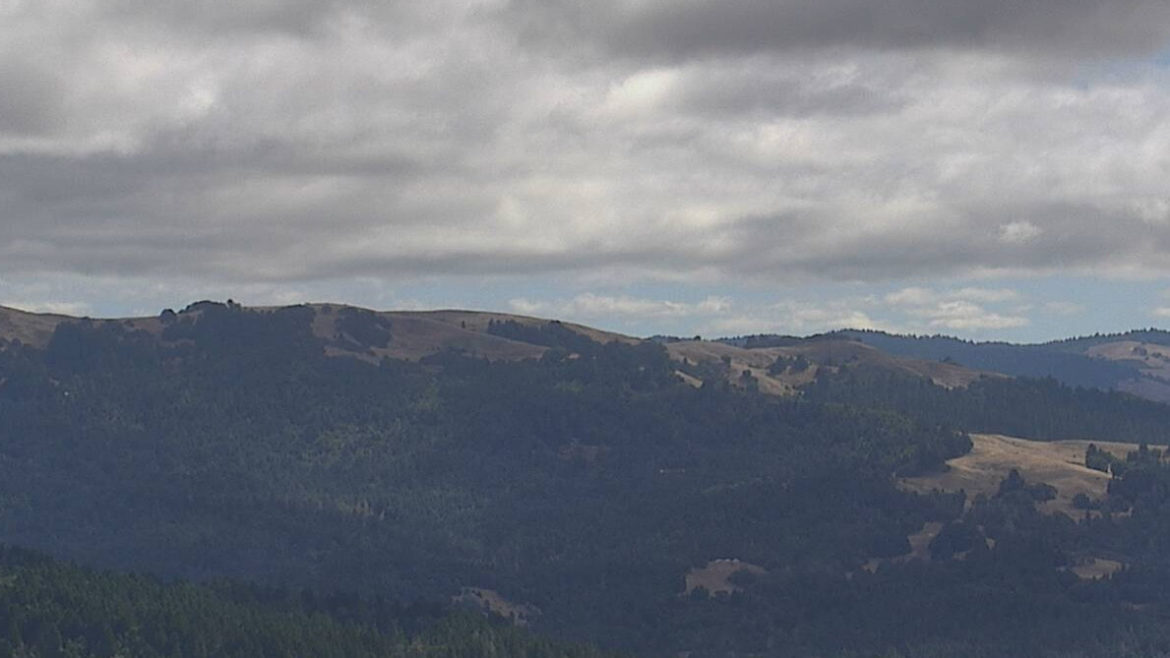 A fire cam photo of the area where the Henthorne Fire's smoke plume had been visible, now mostly absent. Photo taken at about 12:20 p.m., Sunday, Sept. 8, 2019.

UPDATE 8:00 p.m. — The Forest Service reported this evening that with a more thorough on the ground assessment of the fire perimeter resulted in the size of the Henthorne Fire being revised down to 237 acres.

Here is their press release:

Henthorne Fire update
WILLOWS, Calif., Sept. 8, 2019 — The Henthorne Fire remained at 15 percent contained Sunday evening. The size of the fire was adjusted to 237 acres after crews completed a precise assessment of the perimeter. The fire is located 15 miles northeast of Covelo. The Henthorne Fire is a US Forest Service incident that is being managed under unified command by the Mendocino National Forest and CAL FIRE.
The fire has stopped spreading and is mostly creeping and smoldering. There are 475 resources assigned to the incident including 38 engines, nine crews, two helicopters, two dozers and eight water tenders. Crews are focused on reinforcing firelines and extinguishing burning vegetation near the containment lines.

Personnel on the incident expect cooler conditions early next week with the temperature in the 60s and light wind.

#
USDA is an equal opportunity provider, employer, and lender.

ORIGINAL
MENDOCINO Co., 9/8/19 — The Henthorne Fire, which is burning about 15 miles north of Covelo, continues to grow — adding about 90 acres overnight, and hitting 380 acres. Containment is listed as 15% by the National Forest Service, and 10% by Cal Fire, and firefighters continue to be challenged by the remote nature of the fire.

Fire cam footage (see above) shows that though the fire did grow overnight, as of about noon today there was not much of a smoke plume.

(For our past coverage of the fire check out this link.)

In Lake County the Oak Fire, which broke out yesterday afternoon, was contained overnight after growing to 53 acres, and State Route 29 was reopened late last night. It was reported by the Record Bee that a man was arrested yesterday for allegedly starting the fire.

The Henthorne Fire is one of a several fires in remote forested parts of Northern California that appear to have been started by lightning strikes last week. About 20 miles east-northeast of the Henthorne Fire, the South Fire has grown to 2,050 acres, and is 0% contained. That fire appears to be entirely within National Forest land, and is as such being managed by the Forest Service. They have 26 personnel on the fire.

Another 10 miles, roughly, beyond that is the Red Bank Fire, which has grown to 8,838 acres, and is 20% contained. The fire continues to throw up substantial smoke and is being managed by Cal Fire. According to the morning report there are 1,930 people working that fire.

The real monster fire in California right now is the Walker Fire, in Plumas County, near the Nevada border. That fire is within the National Forest, and is not being managed by Cal Fire, and has grown to just of 38,000 acres, and is 5% contained.

You can see below a satellite image of the smoke being put off by these various fire. The red dots are one kind of satellite date, representing hot-spots visible in the infra-red spectrum. The smaller cluster on the left, are the Henthorne, South and Red Bank fires, while the large red splotch is the Walker Fire.

On a positive note, temperatures have cooled significantly in Mendocino County, though this has also brought more brisk winds.