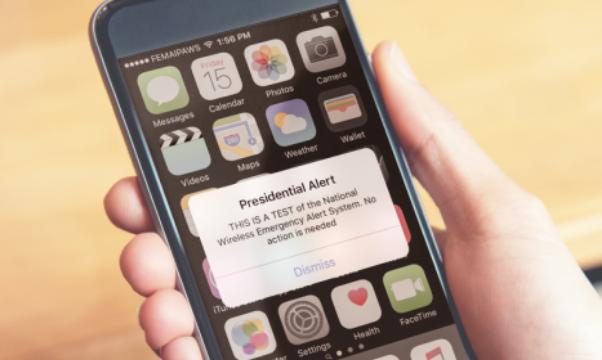 MENDOCINO Co., 10/1/18 — Get ready for your cellphone to make a weird loud noise on Wednesday around midday, FEMA (the Federal Emergency Management Agency) and the FCC (the Federal Communications Commission) are rolling out their new Wireless Emergency Alert (WEA) system, after having been delayed due to Hurricane Florence.
(Desplácese hacia abajo para leer en español)

The test will be broadcast 11:18 a.m. on Oct. 3. At that time, cellphones that are modern enough and within range of a tower, will emit a unique tone, and present a message stating, “THIS IS A TEST of the National Wireless Emergency Alert System. No action is needed.” Similar to the emergency broadcast tests we are all familiar with on television and radio. This test is unrelated to the local emergency robo-calls, or Nixle — there is no master list that you have to sign up for, or that you can opt-out of, all cellphones with the proper technology will be activated by this system.

This is the first national test of the system, and everyone’s phone across the country will apparently receive the message at the same time. Only the president has the authority to issue a nationwide alert via the WEA.

Here is more info from FEMA:

The Federal Emergency Management Agency (FEMA), in coordination with the Federal Communications Commission (FCC), will conduct a nationwide test of the Wireless Emergency Alerts (WEA) and Emergency Alert System (EAS) on the backup date of October 3, 2018 due to ongoing response efforts to Hurricane Florence. The WEA portion of the test commences at 2:18 p.m. EDT, and the EAS portion follows at 2:20 p.m. EDT. The test will assess the operational readiness of the infrastructure for distribution of a national message and determine whether improvements are needed.

The WEA test message will be sent to cell phones that are connected to wireless providers participating in WEA. This is the fourth EAS nationwide test and the first national WEA test. Previous EAS national tests were conducted in November 2011, September 2016,  and September 2017 in collaboration with the FCC, broadcasters, and emergency management officials in recognition of FEMA’s National Preparedness Month.

Cell towers will broadcast the WEA test for approximately 30 minutes beginning at 2:18 p.m. EDT. During this time, WEA compatible cell phones that are switched on, within range of an active cell tower, and whose wireless provider participates in WEA should be capable of receiving the test message. Some cell phones will not receive the test message, and cell phones should only receive the message once. The WEA test message will have a header that reads “Presidential Alert” and text that says:

“THIS IS A TEST of the National Wireless Emergency Alert System. No action is needed.”

The WEA system is used to warn the public about dangerous weather, missing children, and other critical situations through alerts on cell phones. The national test will use the same special tone and vibration as with all WEA messages (i.e. Tornado Warning, AMBER Alert). Users cannot opt out of receiving the WEA test.

The EAS is a national public warning system that provides the President with the communications capability to address the nation during a national emergency. The test is made available to EAS participants (i.e., radio and television broadcasters, cable systems, satellite radio and television providers, and wireline video providers) and is scheduled to last approximately one minute. The test message will be similar to regular monthly EAS test messages with which the public is familiar. The EAS message will include a reference to the WEA test:

“THIS IS A TEST of the National Emergency Alert System. This system was developed by broadcast and cable operators in voluntary cooperation with the Federal Emergency Management Agency, the Federal Communications Commission, and local authorities to keep you informed in the event of an emergency. If this had been an actual emergency an official message would have followed the tone alert you heard at the start of this message. A similar wireless emergency alert test message has been sent to all cell phones nationwide. Some cell phones will receive the message; others will not. No action is required.”

The test was originally planned for September 20, 2018 but has been postponed until October 3, 2018 due to ongoing response efforts to Hurricane Florence.


And here it is in English: