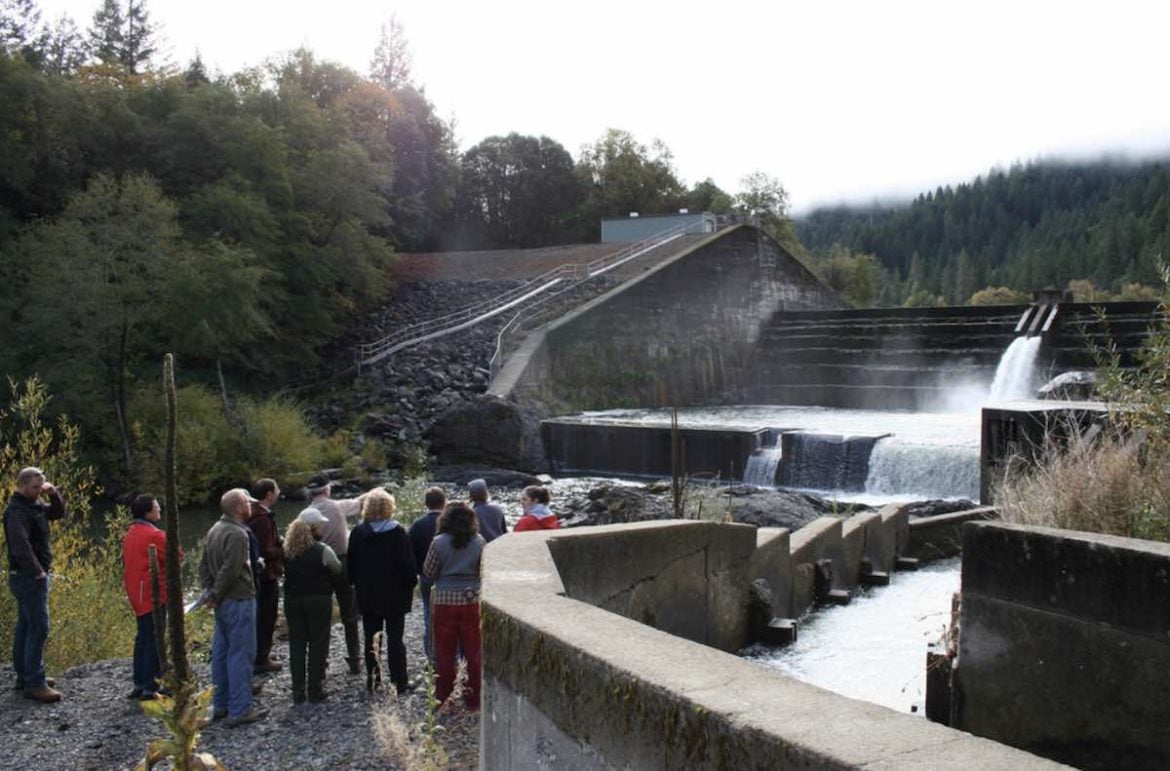 MENDOCINO CO., 9/9/18 — PG&E kicked off an auction this past week for the Potter Valley Project (PVP), a hydroelectric facility which includes the Scott’s Dam, the Cape Horn Dam — both located on the main stem of the Eel River — as well as a power plant and a tunnel that diverts water from the Eel River watershed to the Russian watershed. The Project spans about 5,500 acres in Mendocino and Lake counties, and includes Lake Pillsbury. Water from the Project is diverted at the Van Arsdale reservoir, and provides irrigation water for Potter Valley, and then proceeds into the headwaters of the Russian River, to Lake Mendocino, and south to many farms and towns in southern Mendo, Sonoma, and Marin counties. 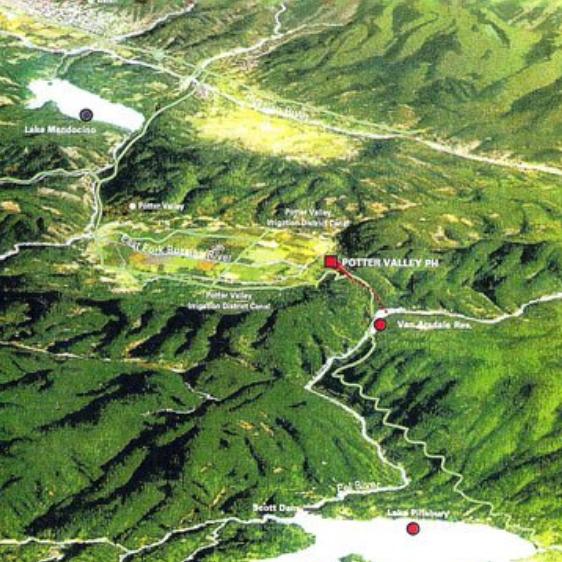 Though in most people’s minds the Potter Valley Project is a water project, because it was initially developed as a hydro-electric project and continues to generate power, it is regulated by, and is being re-licensed by, the Federal Energy Regulatory Commission (FERC). Its current license will expire in April of 2022, and PG&E has begun the re-licensing, stating that the new owner would be expected to take over and complete the process. The company announced the sale in May, and states that facility “no longer serves as an economical source of electricity generation for its customers,” pointing to the distance from other PG&E infrastructure, a changing energy market, and operational costs as factors in the decision to sell.

The bidding process for the Project is expected to be done by mid-2019, and PG&E expects to transfer ownership in 18 to 24 months. A joint powers authority comprised of various Mendocino County agencies, called the Mendocino County Inland Water and Power Commission (Mendo IWPC), is expected to put in a bid. The MendoIWPC was formed in 1996 and includes the County of Mendocino, City of Ukiah, Redwood Valley County Water District, Potter Valley Irrigation District and the Mendocino County Russian River Flood Control and Water Conservation Improvement District.

The Mendocino County Board of Supervisors unanimously passed a resolution on August 21 concerning the Potter Valley Project, timed to bring to a Eel-Russian River Commission meeting the next day. The Eel-River Russian River Commission includes Humboldt, Mendocino, Lake, and Sonoma counties. Prior to the Mendocino supervisors’ meeting, Humboldt County supervisors passed a resolution concerning the Potter Valley Project, calling for the project to be decommissioned, or for diversions to be eliminated in the summer and the fall, to protect fisheries. The Humboldt resolution also references a “two basin solution” with “co-equal goals” for the Eel and Russian Rivers as proposed by the North Coast’s Congressman Jared Huffman — referencing the Russian and Eel river basins.

Mendocino County’s resolution notes the importance of the PVP as a water source for both domestic and commercial use for over half a million people in Mendo and along the Russian River in counties to the south, beginning with the application of a irrigation water right on the Eel River by Van Arsdale in 1905. The four page resolution also encourages the Mendocino County Inland Water and Power Commission to pursue ownership of the project, and emphasizes the importance of regulated stream flows from the Project to protect fisheries and improve restoration efforts in Mendocino County fisheries. The resolution includes an estimate that the economic value of the agricultural water diversion for Mendo alone, not including Sonoma, is about $775 million annually.

Prior to approving the resolution, Mendocino supervisors noted that the two counties were staking out very different positions, and that ideally a mutually-agreeable solution could be reached. Board Chair Dan Hamburg, in a discussion of the water diversion and its important to fisheries, noted that it “seems one of the entities that needs some education on the issue of Scott Dam — and the flows in the Main Stem — is Humboldt County,” and emphasized the importance of continuing to with the other counties and ensure the water diversion was preserved. The majority of the public present, many employed by  public agencies impacted by the project, spoke in support of approving the resolution. At the time of passage, Lake and Sonoma county supervisors had not yet approved resolutions concerning the project, but were expected to take a position.

In response to the sale of the dams, the environmental organization Friends of the Eel River  issued a statement expressing concern about the seismic stability of the Scott Dam infrastructure, due to its proximity to the Bartlett Springs Fault. Citing a study of seismic stability, which they commissioned, Friends of the Eel notes that a landslide caused by seismic activity could significantly damage to the dam. They elaborate that, “[The Federal Energy Regulatory Commission (FERC)] has refused to consider dam safety issues in the proposed relicensing of Scott Dam and the Potter Valley Project.” As additional reasons not to continue operation of the dams, Friends of the Eel also highlights the operational costs of the facility, adding that FERC is likely to require a new owner to upgrade the dams’ infrastructure to allow for fish passage.

The Potter Valley Project consists of two dams along the upper Main Stem Eel River, a powerhouse in Potter Valley, and about 5,600 acres of land, including Lake Pillsbury in Lake County.

PG&E is in the second year of the minimum five-year process of obtaining a new operating license from the Federal Energy Regulatory Commission (FERC) for the project. PG&E will continue to own, operate and relicense the project throughout the auction process.

PG&E announced it would auction the project last May, and today’s action begins the marketing phase of the auction process. PG&E is using a “request for offers” type of auction process that is intended to meet the needs of both seller and buyer – and considers other factors in addition to price.

“PG&E wants to find a new owner with the appropriate qualifications and experience to operate the project in a safe and compliant fashion. The project has unique characteristics and we believe they have the potential to yield significant value for the right owner,” said Alvin Thoma, Senior Director of Power Generation at PG&E.

The project diverts about one-fifth of the average annual flow of the upper Main Stem Eel River at Van Arsdale Reservoir through a tunnel and penstock to a powerhouse located in Potter Valley where it is used to generate electricity. The amount of water diverted by the project represents only 2 percent of the total flow of the Eel River at its mouth. Before it is diverted, some of the water is collected during the wet season and stored in Lake Pillsbury for later release – also providing lake-based recreation opportunities.

After the diverted water leaves the Potter Valley Powerhouse, it enters a canal and the East Branch of the Russian River, where it provides water to farms and communities in southern Mendocino and northern Sonoma counties as well as improving fish habitat in the Russian River. Per the conditions of the project’s operating license, water flows in the upper Main Stem Eel River below the Van Arsdale Reservoir are managed to closely mimic the upper Main Stem Eel River’s natural flow.

PG&E is seeking a new owner for the project as it no longer serves as an economical source of electricity generation for its customers. Potter Valley Project is far from PG&E’s other hydroelectric facilities and regional headquarters, making it especially costly for PG&E to operate. An increasingly competitive energy market, lower generation needs forecasted on PG&E’s system, and the increasing cost of operating the facilities were all factors in PG&E’s decision.

Depending on how many proposals are received and need to be evaluated, PG&E expects to select proposals and begin formal negotiations with a buyer by mid-2019. If all goes well, the sale and transfer of the project could be completed within one-and-a-half to two years.

Here’s the full press release from Friends of the Eel:

Utility Pacific Gas and Electric (PG&E) began seeking potential buyers today for two aging dams on the upper Eel River, even as new questions emerge about the vulnerability of the larger dam to seismic shocks. A conservation group working to remove the dams released a technical analysis today that identifies an active landslide above the upper dam as “a significant geological hazard to the dam.” The report show how the slide is likely to move significantly in response to the kinds of seismic events a nearby fault could generate.

Scott Dam and Cape Horn Dam were built to divert water from the upper mainstem Eel River to the upper East Branch of the Russian River through Potter Valley. Together, the two dams and associated diversion works are called the Potter Valley Project, which is licensed as a hydroelectric project by the Federal Energy Regulatory Commission (FERC). The entire Project is now being re-evaluated in a FERC relicensing process that may conclude as early as 2022.

Any new FERC license for the Potter Valley Project is likely to impose new requirements that the 130’ Scott Dam be significantly modified to provide passage for salmon and steelhead. However, despite the fact that the Eel River dams are twice the age of Oroville Dam — which nearly collapsed despite routine safety inspections — FERC has refused to consider dam safety issues in the proposed relicensing of Scott Dam and the Potter Valley Project.

Unfortunately, most of the existing information about the Bartlett Springs fault and the susceptibility of Scott Dam to a seismic event is concealed behind a bureaucratic shield of secrecy. Under the provisions of the 2001 Patriot Act, a wide range of information critical to assessing the safety of dams is classified as Critical Energy Infrastructure Information (CEII) and kept secret from the public.

Against this backdrop, Friends of the Eel River commissioned Miller Pacific Engineering Group to assess the potential for an active landslide above Scott Dam’s left (southern) abutment to affect the dam and its reservoir during a seismic event. Miller Pacific applied the analytic techniques and standards used by both California’s Division of Safety of Dams (DSOD) and FERC’s own Dam Safety program. The analysis indicates that “landslide displacements will occur during a strong seismic event.”

Miller Pacific’s results suggest that the landslide mass, which measures approximately 500 feet in length and 160 feet in width, extends to potential depths of as much as 110 feet. The landslide appears to contain more than 8,000,000 ft3 (cubic feet) of material estimated at approximately 130 pounds per cubic foot. During a seismic event, the force at the toe of the landslide could be 125 million pounds.

Miller Pacific engineers concluded “it is our professional opinion that the large landslide complex adjacent to, and possibly below, the left abutment presents a significant geological hazard to the dam that requires further investigation. Since the dam acts as a strut across the Eel River, the landslide mass may be applying a significant soil pressure to the dam. In addition, the preliminary calculated seismic displacements are enough to cause concern about uplift or damage to the dam from landslide movement during a strong seismic event.”

“This analysis provides another sobering note for parties who may be considering attempts to purchase the Eel River dams,” said David Keller, Bay Area Director for Friends of the Eel River. “The enormous liabilities this significant dam failure risk poses compound the already mounting costs of maintaining and operating the dams.”

Friends of the Eel River (FOER) is one of a number of conservation, fishing, and other groups working to remove the dams from the Eel River and restore the Eel River’s once prolific salmon and steelhead fisheries.

The Miller Pacific analysis and accompanying technical memo, as well as supplementary materials, are available for review HERE.

One thought on “PG&E has put the Potter Valley Project up for auction, and who buys it could reshape water policy for decades”