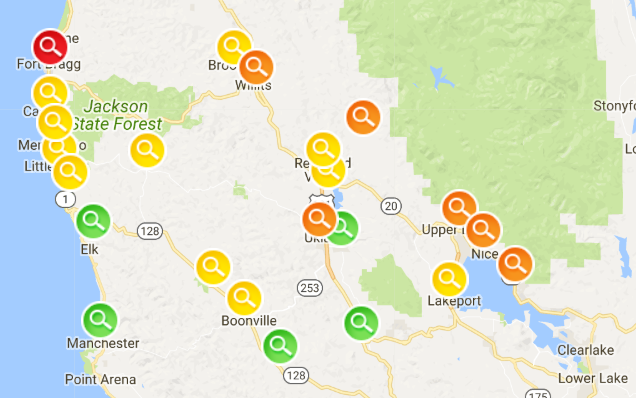 UPDATE 7/30/28 — Power was restored to Mendocino and Lake counties yesterday via the remaining 115 kilovolt transmission line. We will continue to update this situation today, and are in contact with PG&E.

However, the two high-power transmission lines that were damaged near Upper Lake have not been repaired. PG&E runs three 115 kilo-volt transmission lines along northern Lake County into Mendocino. Those lines bring large amounts of electricity to these counties. Two of them were hit by the Ranch Fire, but the third remains functional. According to PG&E spokesman Jeff Smith, PG&E engineers are now trying to feed power into Mendocino Co. through this single line, rather than the three. They are slowly bring the system back online, but it will take some time to go through the process.

PG&E workers have not yet been able to approach the two damaged transmission lines due to intense fire activity in the area. Clearly, this situation is less that optimal, and we should all remain prepared to see sporadic power outages as the fires continue. One nasty realization that we often experience during power outages is remembering that gas stations and their pumps operate on electricity, so during these fires it is always good to keep your tank full.

UPDATE 7:00 p.m. — The blackout continues to affect large swaths of Mendocino and Lake, though some people in Ukiah report having sporadic power. The outage seems also to have hit cellphone towers. An AT&T representative stated that up to five towers were down in the Willits area and that it might be some time, up to a day, before they are restored. But again, these predictions should be taken with a grain of salt.

Internet connectivity is sketchy across wide parts of the county, so if you do manage to read this, go ahead and tell some neighbors the old fashioned way.

Also, the earlier report of a fire in Willits may have been a false alarm, and there is no cause for concern at this time — if there was a fire it was small and long since gone.

UPDATE 4:20 p.m. — The blackout is affecting 53,189 PG&E customers in Mendocino and Lake counties as of 4:15 p.m. The Ranch Fire has expanded substantially in the last hours and has struck two high-power transmission lines near Upper Lake — the condition of the lines is unknown due to intense fire conditions. A PG&E spokesman has stated that he is hopeful that CalFire will grant access to the lines soon, and that if such access is granted a repair might be possible by 6 or 7 p.m.

Two 115 kilovolt transmission lines have been affected, and potentially substantially damaged, by the fire, and fire conditions remain too intense fo PG&E workers to approch the lines. This means that the condition of the lines is not yet known, and a repair will not be possible until firefighters have battled back the flames sufficiently to allow workers to approach the transmission lines. However, again, PG&E is hopeful that this may be possible by later this evening.

Smith added that the automated responses that have gone out to customers are based on an initial automated “best estimate” of power restoration, but in this case PG&E crews will need to get to the scene before a truly accurate estimate is available.

These transmission lines deliver power to different locations, and as Smith explained, they are something like freeways, routing huge amounts of power long distances, while the individual lines on residential streets and into houses are like surface streets.

UPDATE 3:40 p.m. — At least 36,000 customers are without power around Mendocino and Lake counties as of about 2:30 p.m. Initially at least 53,000 customers lost power approximately the same as last night, but some households on the coast have had power restored.

Deanna Contreras of PG&E stated that the cause of the blackouts has not yet been ascertained, but that a preliminary investigation indicates that heavy smoke may be impacting the electrical transmission around the county — this is the same cause given for last night’s outage. Six crews are currently working full-time to assess the outage and begin addressing the black-out.

Contreras said that there is currently not extimate for when power will be full restored. Some customers have received automated alerts stating that power may be back by 6:00 p.m., but given the statement from Contreras this should be taken with a grain of salt.

The Ukiah Police Department sent out a Nixl alert noting that there was a county-wide outage, and that they will provide further updates will be sent out when more information is available.

UPD also requests that people only use 911 in emergencies during the blackout. The non-emergency number is 707.463.6262. The CalFire wildfire public information line is 707.574.8261, and we’re updating current wildfire information and evacuations for the Mendocino Complex in this article.

Contrereas emphasized that this is not a planned safety power outage due to the wildfires. In situations where the company shuts off power to prevent a wildfire, PG&E will attempt to notify customers who have signed up for “my account” notifications and alerts at least 48 hours in advance. This is not one of those “public safety” situations, and CalFire did not order the power to be shut-off. Depending on the circumstances, PG&E may only be able to give 24 hour notice or as little as two hours of advanced notice to customers if the planned power shut-off is due to an emergency wildfire situation.

Unfortunately since the outage is impacting digital scanner broadcasts we do not have any current information about the new fire in Willits — readers are reporting that the Willits fire was reported to be possibly across from Eden Valley Ranch, but fire fighters were having difficulty locating any actual fire in that location when the broadcast cut out.

Both Adventist Health Howard Memorial Hospital and Ukiah Valley Hospital are equipped with back-up power systems and should not be impacted by the black-out.

UPDATE 2:55 p.m. — The power outage that just hit appears to be affecting the same region as last night’s — that is from Upper Lake to the Mendocino Coast, including Fort Bragg, Willits, Ukiah, the Anderson Valley and possibly parts of Hopland.

So far no word on the cause, but given the intense fire activity earlier today, and the pattern of the outage it would be a fair assumption that the high power transmission lines are once again being affected by smoke and fire conditions. We do know for sure that CalFire did not order the lines to be de-energized.

WILLITS, 7/29/18 — A structure fire has broken out east of Willits with possible wildfire involvement. CalFire has sent aircraft to hit the fire. It seems to be out on Hearst-Willits Rd. possibly as far as Emandal Farms.

There is also a vehicle fire burning on Pomo Lane. in Ukiah. Firefighters are responding.

And the power has gone out at our office in Willits, it is possible that this blackout is far more widespread, we are gathering information. And we are also getting reports that the power has once again gone out in Ukiah, Anderson Valley, and Leggett, which seems to also be impacting access to the digital scanner broadcasts. Of course last night there was a massive power outage affect 50,000 people in Mendocino and Lake counties. That outage was caused by the fires burning under transmission lines with very heavy smoke.

Here is our coverage of that fire with some more info about outages: