UPDATE WEDNESDAY – Counting in Mendo is not over

County Assessor-Clerk-Recorder Susan Ranochak has said that today she and the elections staff will merely be counting the number of remaining ballots manually, but will not process any additional ballots. She refuses to give an answer as to when the final election results will done, saying she will update the final results when the canvas is complete. Ranochak said that she hopes to be able to provide the press with the final number of how many county ballots remain to be processed by tomorrow morning.

With 51,035 registered voters in the county, only 12,032 ballots have been counted, or about 24% of registered voters. Several precincts workers reported higher than average turn out yesterday so it seems to be the case that many thousands of votes remain to be counted.

We will keep updating today, and hopefully will know the results of local elections by tonight. Ranochak said she may have a final number of ballots needing processing by the end of business day today.

Clinton carried Mendo, currently at about 59% of the vote.

Congressman Huffman will stay as our representative for the California Second Congressional District, having won 76% of vote across the district, and standing at about 72% in Mendo.

Prop 64 won by a sizable margin as well, meaning legal weed is coming to California in 2017, and a complex and uncertain future for the North Coast.

Remember measure AG, because it is a tax provision, requires a two-thirds super-majority, so the outcome is uncertain.

While it is not mathematically impossible that measures AF and AI could see a reversal, it is extremely unlikely at this point.

We depend on your support. A generous gift in any amount helps us continue to bring you this service.

The street repair tax measures in Ukiah also remain too close to call, though it seems likely to win, it is still unclear.

The transient occupancy tax (TOT, a kind of hotel tax) seems to have passed handily.

It seems very likely that Police Chief Gerardo Gonzalez will win, but the other two seats are still up for grabs.

Regardless of how the exact percentages shake out in Fort Brag, the results of this race seem clear.

With 19 precincts (representing only 7.6% of precincts) reporting, for a total of 9302 ballots cast, the current results are:

With 3.2% of precincts reporting, for a total of 6976 ballots cast, the current results are:

Here’s our home page for coverage of today’s elections, from different polling locations around the county. We’ve got reporters in Laytonville, Willits, and Ukiah checking in with voters and poll workers about how the day is going. We’ll be updating this post throughout the day, and well into the night as ballots continue to come in and are processed. 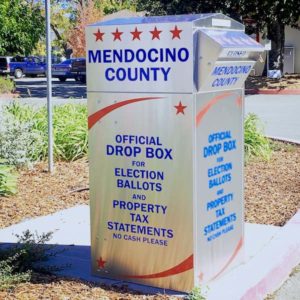 In Mendocino County, polling stations close at 8 pm, and initial results will be coming and posted on the county’s webpage here. We’ll be including updates as we observe the polls.

More voter information can be found in our article here, or by visiting the county’s election website, or by calling the Election’s Office at (707) 234-6819.

And remember, selfies with your ballots aren’t legal in California until January 1!

One thought on “Mendo is STILL counting votes! AF loses, AG is too close to call, council elections are still unclear”