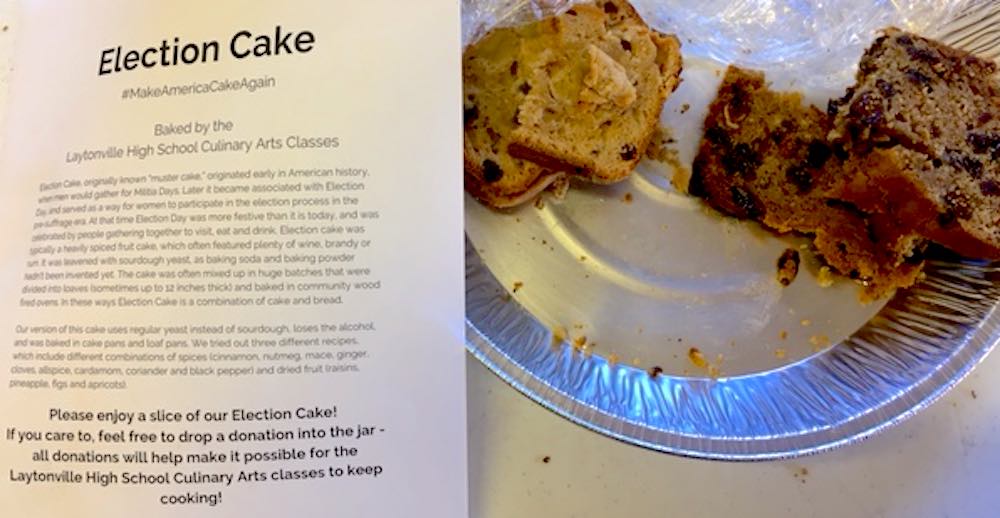 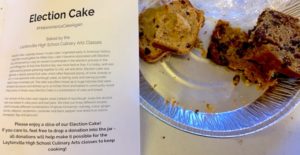 LAYTONVILLE — “I’ve been a polling worker since 2006, and there’s been more people here today than in any year but 2008,” said voting inspector Gloria Harrison, noting the high voter turnout at her polling station at the Laytonville Lions Fire Hall on Laytonville’s Willis Avenue. Harrison, along with poll workers Jane Futcher, Erin Carney, and inspector Mike Carter sat at two folding tables smiling and welcoming voters on the sunny afternoon of November 8.

As voters entered and exited the polls, they were greeted by a sign exhorting “Make America Cake Again,” with a plateful of three kinds of “election cake,” baked by the Laytonville High School’s culinary arts classes. A flyer explained the election cake, originally known as “muster cake” during early American “Militia Days” celebrations, was a tradition that allowed women to become involved with election day processes before they gained the right to vote.

By about 2pm, the group had seen more than 151 in-person voters, more than 200 dropped-off absentee ballots, and about 50 provisional ballot voters, and more voters — including those on a break from work, families with young kids, and those hoping to quickly hand in their envelopes — continued through the door in a steady stream. Carter, who arrived before the polls began at 7am, said he’d be helping voters until the ballots were collected by elections workers some time after 8pm.

Most Laytonville residents seemed in good spirits despite some hard choices on the ballot, and many stopped to greet and chat with their neighbors on the way in and out of the hall, showing off their “I Voted” stickers. Kids waited patiently at the tables pouring over voter booklets while their parents and grandparents filled out their ballots. “Feeling patriotic today?” said one resident to a friend, who replied, “Well, I had my say, we’ll see how far it goes.” Harrison said the station was busiest early in the morning, with a few voters waiting outside the door to place their votes when polls opened at 7am, but the lines had stayed relatively short or non-existent throughout the afternoon.

Harrison and Carter said they’d had to turn away a few people who hadn’t registered by the October 24 deadline, or had registered in another county but hoped to vote in Mendocino. At one point, two voters from North Carolina were sent to the station accidentally by postal workers, but the polling workers were able to redirect them back to the post office to get their ballots sent off to the right state in the mail.

In addition, a few locals had trouble with their online registration, which Carter explained could have been delayed if it occurred in the 6 – 8 weeks before the deadline, as the volume of registrations had created a delay. Some had experienced trouble after switching party registration after the primaries, and a few others came in with ballot issues, including ballots “spoiled” by a family pet or left far behind on one of Laytonville’s many surrounding hills. But by and large polling staff were able to help provide provisional ballots to get those voters a chance to make their voice heard. “Thanks for being here!” said one resident as she left, to which Harrison replied, “You give us a reason to be here!”

As for the election cake, it was traditionally was spiced made with fruit sourdough yeast, rum, and baked in large shared batches in community wood-fired ovens akin to a bread. For 2016’s #MakeAmericaCakeAgain campaign, the culinary students at Laytonville High took out the alcohol, substituted regular yeast, and baked three different recipes in cake and bread pans, with a combination of dried fruit and spices such as ginger, cardamom, cloves, cinnamon, black pepper, mace, coriander, and allspice. By mid-afternoon the plate was almost empty.