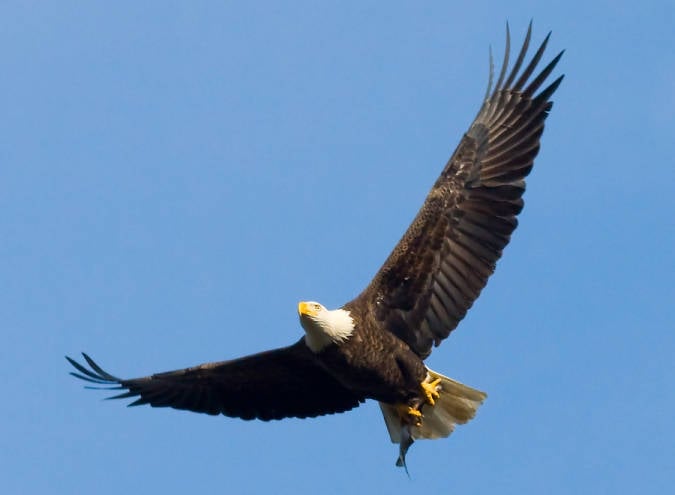 UPDATE, 7 p.m. — PG&E has agreed to a temporary reprieve for tree removal until Jan. 17 to allow for negotiations between the public utility, the Coyote Valley Band of Pomo Indians, and environmental groups, according to a news release from The Center for Biological Diversity.

“The Tribe needs time to consult with the [U.S. Fish and Wildlife Service] and PG&E in order to reach a solution that saves these eagles and keeps everyone safe,” said Priscilla Hunter, the tribal historic preservation officer for the Coyote Valley Band of Pomo Indians.

POTTER VALLEY, CA, 1/12/23 — A Potter Valley pine tree that harbors a bald eagle nest is still standing after area environmental activists blocked PG&E workers who’d arrived to cut the tree down Wednesday morning. The utility has been trying to remove the more than 100-foot-tall tree, which is dead or dying, for over a year, citing fire safety concerns because of its proximity to a power line.

PG&E began monitoring the eagle nest there in 2007, and reported that it has been used a total of 12 times since. According to local advocacy group Redwood Nation Earth First!, neighbors have attested that the tree has been in use for at least 25 years, as evidenced by a “huge, multi-storied nest.” Advocates have reported seeing bald eagles in the nest this year.

In the 1960s, bald eagles were threatened with extinction because of DDT poisoning, with only 417 nesting pairs known to exist; but assessments in the 2000s, decades after the banning of DDT, showed 23 times as many nesting pairs in the contiguous United States, signaling a significant population rebound. Between 2018 and 2019, FWS estimated the population in the lower 48 states at 316,700 bald eagles, including 71,467 breeding pairs.

Heather Beeler, the U.S. Fish and Wildlife Service (FWS) eagle permit coordinator who issued the permit, told The Mendocino Voice that eagles often attend to multiple nests during their breeding season. FWS’s assessment found that the pair of eagles in question has an alternate nest they can use in a nearby tree.

“Bald eagles are very tolerant of nesting around humans,” Beeler explained in a phone conversation. “As long as they have a prey base to utilize, which is often along waterways … habitat loss does not appear to be something that is problematic for them. In California, their populations are expanding.”

Beeler’s work is much more focused around golden eagles, she explained, which are a more “shy and sensitive” species: “The more people move in, the more [golden eagles] move out.” She emphasized FWS’ finding that this tree removal will not adversely affect the bald eagles who nest there.

“I want to acknowledge that this pair of bald eagles is clearly very special to this community,” she said. “We sure hope they choose to nest in a tree near this location, two to three trees away, and stay in that area where they’re visible to the community that clearly enjoys observing them. But biologically, with the removal of this nest and this pair shifting to a different location — even if it’s the alternate nest that’s 0.8 miles away — the pair is going to be fine.”

According to a Wednesday news release from multiple environmental groups in Mendocino County, the Coyote Valley Band of Pomo Indians has requested government-to-government consultation with FWS.

“We ask that no harm occur to this tree during consultation because we need time to explore reasonable solutions that will help protect our bald eagle relatives,” Chairman Michael Hunter said.

PG&E has stated that it’s proceeding with tree removal as part of a vegetation management program aiming to reduce fire risk. The public utility counts the pine tree among “dead, diseased, dying, or defective trees that are at risk of falling on our facilities and starting fires or cutting off power to our customers,” given its proximity to a power line that serves one customer in the fire-prone landscape north of the Van Arsdale Reservoir.

Joseph Seidell, who lives nearby, started a GoFundMe for an alternate solution of moving power lines underground, which he said PG&E estimates would cost $250,000. The GoFundMe had raised $1,076 as of Thursday morning.

“The eagles should be welcomed and protected, not evicted from their chosen nest,” he said in a news release. “The fire hazard problem can be solved without sacrificing the tree.”

PG&E deactivated the power line last year to cut down on fire risk, and provided generators to the customer. But a spokesperson says this is not a long-term solution.

“[T]his is an opportune time to remove the dead tree prior to nesting season beginning so that the eagle[s] can return to the other nest,” PG&E spokesperson Angela Juarez-Lombardi wrote in an email to The Voice on Thursday. “Upon removal of the tree, PG&E plans to remove the temporary generation that we had been providing to the property and will safely restore electric service.”

Nesting season is formally recognized as beginning Jan. 15; Beeler told The Voice that the eagles are unlikely to lay any eggs until February or March.

Advocates continue to hold vigils at the tree in an attempt to prevent its removal.