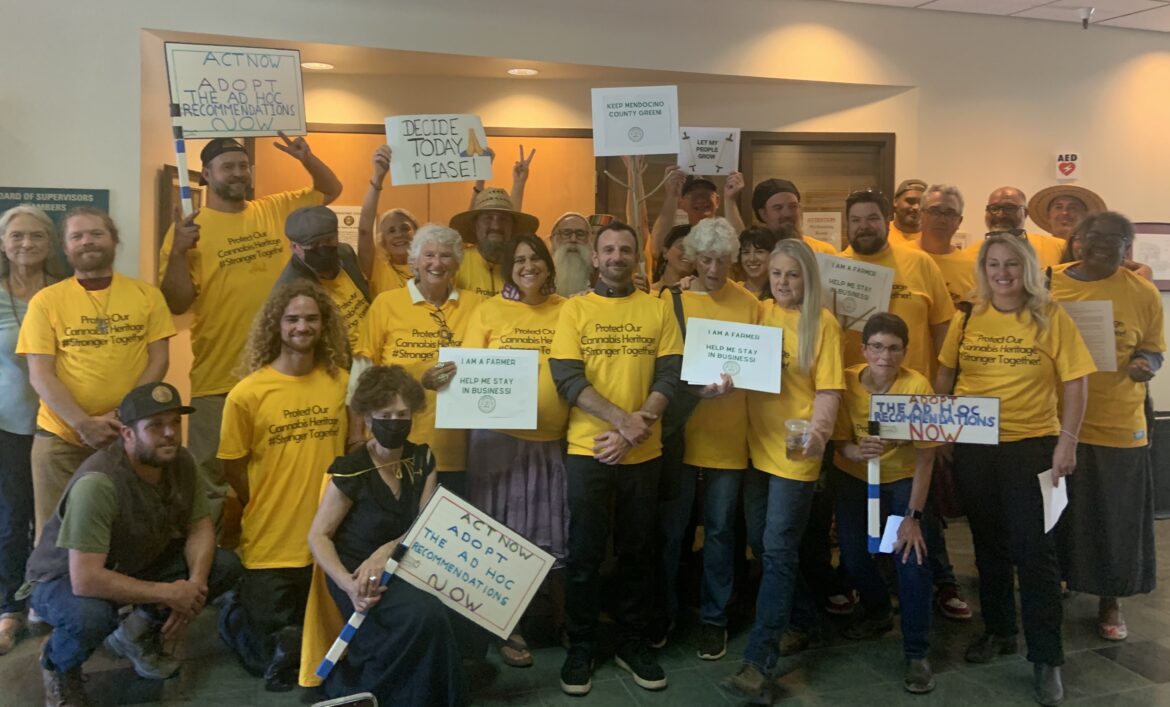 MENDOCINO Co, 10/4/22 — Ahead of discussion around multiple cannabis-related items in the Board of Supervisors’ Tuesday meeting, some 30 members of Mendocino Cannabis Alliance (MCA) waited for nearly two hours — in the middle of harvest season — to comment on Cannabis Ad Hoc Committee recommendations they favored, and on an item many felt could continue to kick small cultivators while they’re down.

“We are not here seeking special treatment,” the MCA said in an organizational statement to media. “Rather, we are seeking fair and equitable approaches to local policy that make every effort to urgently streamline the overly complicated local permitting process in order to stabilize this critical part of our community.”

Many in attendance carried signs encouraging the supervisors to adopt the Ad Hoc Committee’s recommendations from supervisors Glenn McGourty and John Haschak: which include — among many others — clarifying exemptions for disease and safety concerns with vegetation on peoples’ property, allowing in-residence trimming, and creating a dispute resolution process to help the current cohort moving through the approval process succeed. The supervisors’ agenda also includes an ordinance to add an administrative appeals process for denials of cultivation permit or renewal applications.

Comments were especially impassioned around a motion by Chair Ted Williams aiming to “limit Cannabis Equity Program(s) to legitimate governmental purposes, including environmental remediation, encouragement of regulatory compliance, mitigation of negative impacts of existing industry and void any program elements found to be impermissible under Federal Law.” As detailed on the county website, the state funding that created this program was intended to “provide funding and services for those hardest hit by the War on Drugs by lowering barriers to cannabis permitting and licensing.”

“We are going to go down unless we have this funding,” Monique Ramirez of Sunbright Gardens said in an emotional comment, describing how her  farm was raided prior to legalization.

A motion to have outside counsel evaluate the legality of the next round of Cannabis Equity Grant funding passed with Haschak dissenting (who argued that if the state-level grant program’s federal legality was in question, the issue would have been raised earlier in the process).

Some who have their permitting in place showed up in support of other local farmers, who have been waiting months for approval on their annual licenses.

“Up to a year, they’ve been waiting on this money,” Russell Perrin of Perrin Family Farm in Calpella told The Mendocino Voice. “They’ve given every bit of information they can give and they’re still being batted around.”

Prior to speaking at the meeting, farmers continuously reiterated the importance of cannabis to the local economy.

“A lot of businesses in my hometown of Willits first started with cannabis income,” Teresa Sischo of Impassable Farms told The Voice. “They made enough money to open up a store, or open up a restaurant.”

Several farmers also mentioned struggles with the county’s regulations around vegetation modification. Multiple people spoke on fears of punitive judgment for removing dead or diseased trees on their properties; Sischo cut down dead trees on her farm this year after documenting their condition for the county, and then learned Aug. 29 — after months of work to apply for monies through the equity program — that having removed the trees would render her farm ineligible for the funds.

Because of the financial strain and ineligibility for the grant funding, Sischo and her husband have been unable to hire people to help and have been harvesting plants entirely on their own this year. Some farmers are close to giving up their farms, according to several conversations The Voice had Tuesday afternoon.

Kim Dellacorva of One Feather Ranch received her permit in 2017, but said she came out to the meeting to support a neighbor who has struggled to submit further documentation due to a glitchy website portal, after receiving a 15-day notice to file those documents.

“He has a lot of stress already because it’s harvest season,” she said. “It’s just hitting critical mass for some people. … The way [notices] are worded is really accusatory and negative.”

The supervisors’ discussion on these items continues; circle back to mendovoice.com in the coming days for more detailed coverage on possible cannabis policy changes from the BOS. The ongoing supervisors’ meeting can be watched here.

3 thoughts on “‘We are going to go down unless we have this funding’: Mendocino Cannabis Alliance growers, supporters turn out for BOS discussion”