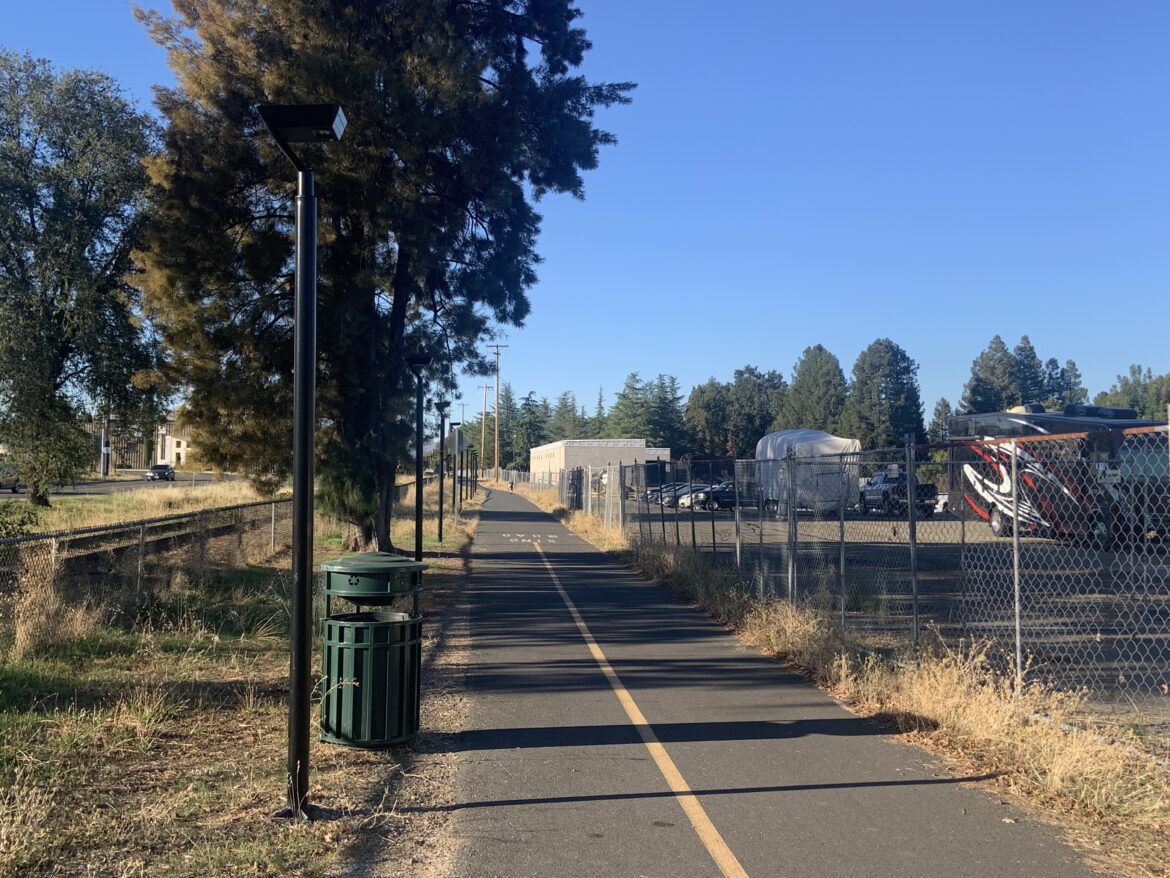 MENDOCINO Co., 10/26/22 — Plans for the Great Redwood Trail, a more than 300-mile trail through Northern California that would be America’s longest rail trail if completed, are “full steam ahead” per a kickoff event Monday night. State Senator Mike McGuire, who spearheaded the project, hopes it will have a transformative impact in our region by capitalizing on California’s booming outdoor recreation industry.

Mendocino Railway, the company that operates the Skunk Train attraction, was one of two companies to put in an Offer of Financial Assistance (OFA) to lay claim to a portion of the 175-mile rail line from Willits north to Humboldt Bay after the Great Redwood Trail Agency (GRTA), formerly the North Coast Rail Agency, filed to abandon the line. As of last Thursday, Mendocino Railway’s bid to use a 13-mile section of the track to ship gravel for a client was rejected by the Surface Transportation Board (STB) on grounds of inadequate plans for rehabilitation of the rail and financing for the project.

President of Mendocino Railway Robert Jason Pinoli said the company filed in part out of a desire to preserve rail transportation into Mendocino County.

“We’ve been meeting with Senator McGuire and his staff for years now, letting him know that we’re not asking for state money whatsoever to fix the rails, and run trains, and that as the only railroad in the country with a trail crew (full time) as a part of its workforce we’d gladly build the trail too,” he wrote in an email to The Mendocino Voice. “We’ve even gone so far as to say that if you don’t want us to be the rail operator, then for crying out loud let us help you find someone who’s qualified and don’t foreclose on goods and services coming into Mendocino County by rail.”

McGuire sees it differently, though, and on Tuesday night he and the GRTA board celebrated their swearing-in as an official agency and probable ownership of the line they hope to turn into trail. Their lawyers tell them a petition for review that would delay or disrupt that ownership is unlikely, according to Caryl Hart, a member of the California Coastal Commission and the GRTA chair.

“The federal government made it very clear that the Skunk Train didn’t have the finances to build out the line and candidly, they weren’t qualified,” McGuire said.

Though it’s taken four years of planning to reach this point — “We had to fight to wind down the nearly bankrupt former public agency [NCRA], we had to pay off their damn debt, … and then we had to be able to secure the right-of-way,” McGuire said — the Coastal Conservancy is now the state agency in charge of the trail and has hired Alta Planning + Design to develop a Master Plan. A notice of interim trail use or abandonment (NITU) from the STB is making this possible.

“Here, because GRTA is both the owner of the Line and the trail sponsor, the negotiations that normally take place to reach a trail use agreement … may not be needed,” the STB wrote in its decision.

Organizers are now entering a second phase of work with the STB, as they take steps to one day railbank the section of trail south of Willits to Cloverdale. Railbanking is an agreement to use an out-of-service rail corridor as a trail until the corridor is needed again for rail service. This area is particularly important to Mendocino County, as Ukiah’s recently established section of trail was one of the earliest built in the process. Many trail advocates are wondering when Willits and Ukiah can be connected, given the different timelines for these northern and southern sections of the trail.

“The use and the demand is so strong down there,” Hart said. “This is a huge priority for us.”

Mendocino County Supervisors John Haschak and Maureen Mulheren serve on the Great Redwood Trail board of directors, and can also be points of contact for local residents on trail concerns.

Deven Young, Alta’s senior planner on this project, explained that the process is accounting for public engagement, but also for tribal engagement specifically. According to McGuire, Young will be hitting the road throughout Northern California as part of this process. The firm is prioritizing connection with adjacent landowners, corridor communities including tribal nations and associations, underrepresented communities, active transportation users, youth, and seniors.

Young also envisions that “trail-oriented development” (such as campgrounds or bed-and-breakfasts), volunteer ranger programs, ecosystem restoration where rail disrupted habitat, and firefighting resilience will be key pieces of the trail’s role in local communities.

“It is fantastic and it is transformational,” Hart said.

The Master Plan overview, designed to be a road map for developing the Great Redwood Trail, is now live and even includes an interactive map. Users can demonstrate routes they might like to take along the trail and leave notes with their thoughts or questions — and anyone can reach out with questions and thoughts at (707) 440-9445 or [email protected], or using an online survey.

Tuesday night’s kickoff answered a variety of questions about the trail, beginning a public engagement process organizers envision lasting into its operation. The Town Hall can be viewed in its entirety online.