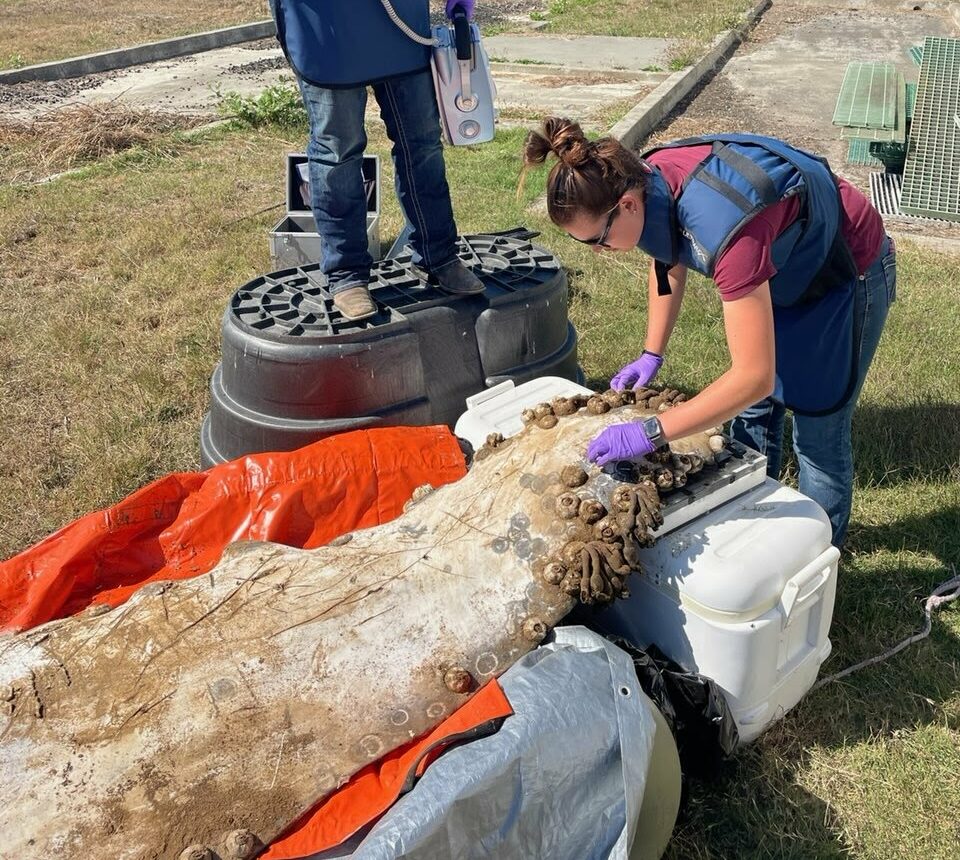 The Noyo Center for Marine Science hopes to display the bones from the fin; Interpretive Facilities Manager Trey Petrey said the 6-to-7-foot long fin is now in a “compost” of sorts, where “all of that fleshy material will deteriorate and then we’ll be able to clean the bones and the flipper.” A team from Mendocino Equine and Livestock brought equipment to X-ray the fin, so the Noyo Center will know how to properly position the bones once they’ve been cleaned.

“I think it’s really cool that humpbacks are not the largest whale, but they have the longest pectoral fins of any cetacean,” Petrey told The Mendocino Voice in a phone call Monday. “Part of that is for propulsion, but they do some amazing things in terms of corralling their prey using their flippers.”

Petrey said drone technology has recently helped humans understand unique humpback behaviors, such as bubble-net feeding. The whale’s fins can measure up to one-third of the whale’s body length, and can also be used to navigate shallow waters and accelerate rapidly.

“Hopefully we’ll have X-rays soon, and we can share those too,” he said.

With assistance from CalPoly Humboldt, local researchers also conducted a necropsy on the whale to gather tissue samples that could help determine how the animal died. Petrey said they were unable to take a baleen sample, because the whale is lying on its back (and due to its size, is all but impossible to turn over).

“They worked a couple of days, working around the tide,” Petrey explained. The whale’s location off a cliff’s edge on Fort Bragg’s coast can make the animal precarious to access at some times of day, when water levels are higher. (Click on the images below to enlarge).

The Noyo Center continues to caution the public never to approach a dead marine mammal of this size; it is also illegal under the Endangered Species Act and the Marine Mammal Protection Act to remove any parts of a whale, unless authorized by the National Oceanic and Atmospheric Administration.