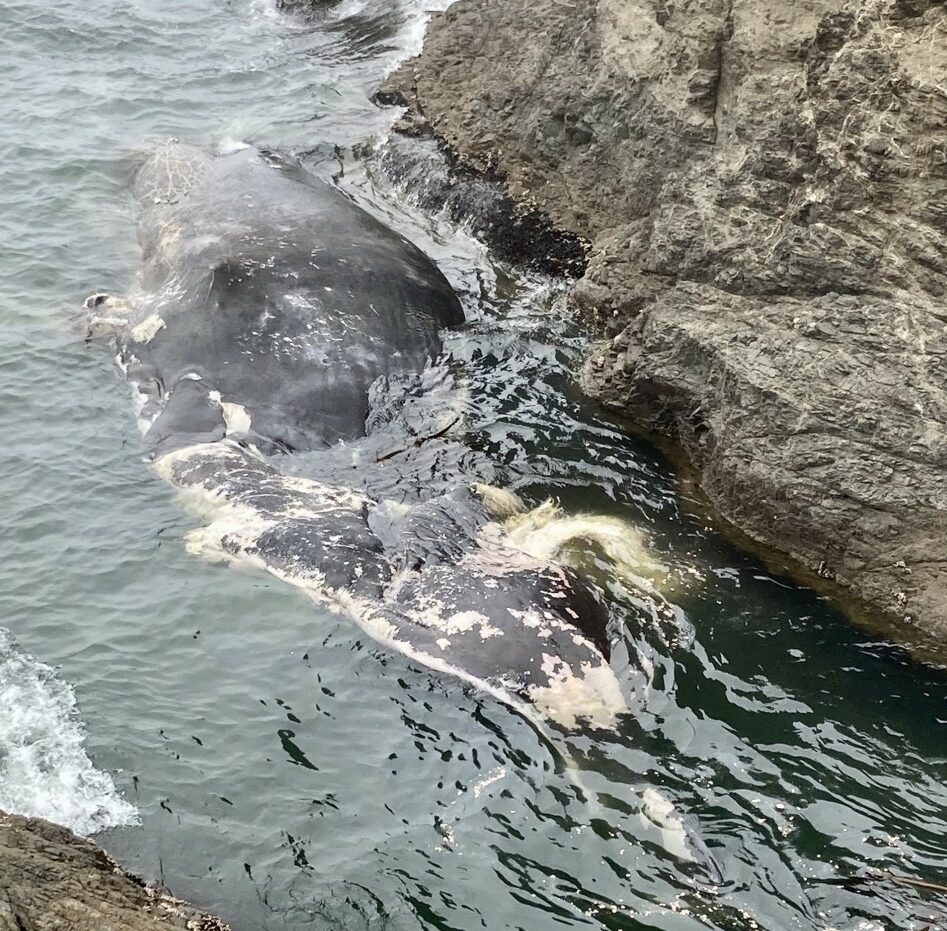 A sperm whale discovered washed ashore near Portuguese Beach sank as scientists tried to tow it, the Noyo Center for Marine Science reported.

MENDOCINO, CA, 8/3/22 – A deceased sperm whale that washed ashore in Mendocino a few days ago sank to the seafloor while scientists attempted to tow it to a beach on Tuesday, according to an update from the Noyo Center for Marine Science.

Noyo Center representatives told The Mendocino Voice Monday they hoped to conduct a partial necropsy to determine the endangered whale’s cause of death, and even to collect the whale’s skull to display in an exhibit.

The whale first appeared in a cove near Portuguese Beach, a popular destination. The Noyo Center worked with the Mendocino Volunteer Fire Department, Noyo Center Science Advisor Jeff Jacobsen, local boat Telstar Charters, the United States Coast Guard, Cal Poly Humboldt, the Marine Mammal Center, and scientists from the California Academy of Sciences in attempting to move the whale carcass to an undisclosed beach where they’d be able to study the animal.

“Unfortunately, the whale lost buoyancy during the process,” the Noyo Center reported midday Wednesday. Noyo Center Interpretive Facilities Manager Trey Petrey could not comment on where the whale sank.

But the Center remains optimistic about education and research potential from the adult male carcass – estimated to be between 40 and 45 feet long – saying, “this is not the end of the story.”

“The Noyo Center would like to continue the research on this whale, possibly in the form of a study of a whale fall, which occurs when a whale carcass falls to the sea floor, providing a sudden, concentrated food source and a bonanza for organisms in the deep sea,” Noyo Center representatives wrote.

Petrey told The Voice that studying whale fall in this way will be a new kind of project for the Noyo Center, involving further discussion around planning, logistics, and specialized equipment.

“The last few days have been a remarkable example of how a community can come together for science,” representatives wrote online.

Read more about the discovery of the sperm whale here.

All marine mammal stranding activities were conducted under authorization by the National Marine Fisheries Service through a Stranding Agreement issued to the California Academy of Sciences/Noyo Center for Marine Sciences and MMPA/ESA Permit No.18786-06.

Anyone who finds a dead animal washed up in Mendocino County should reach out to the Noyo Center’s Marine Mammal Stranding Coordinator Sarah Grimes at (707)-813-7925. Those who find a live marine mammal in distress should contact The Marine Mammal Center at (415)-289-SEAL.