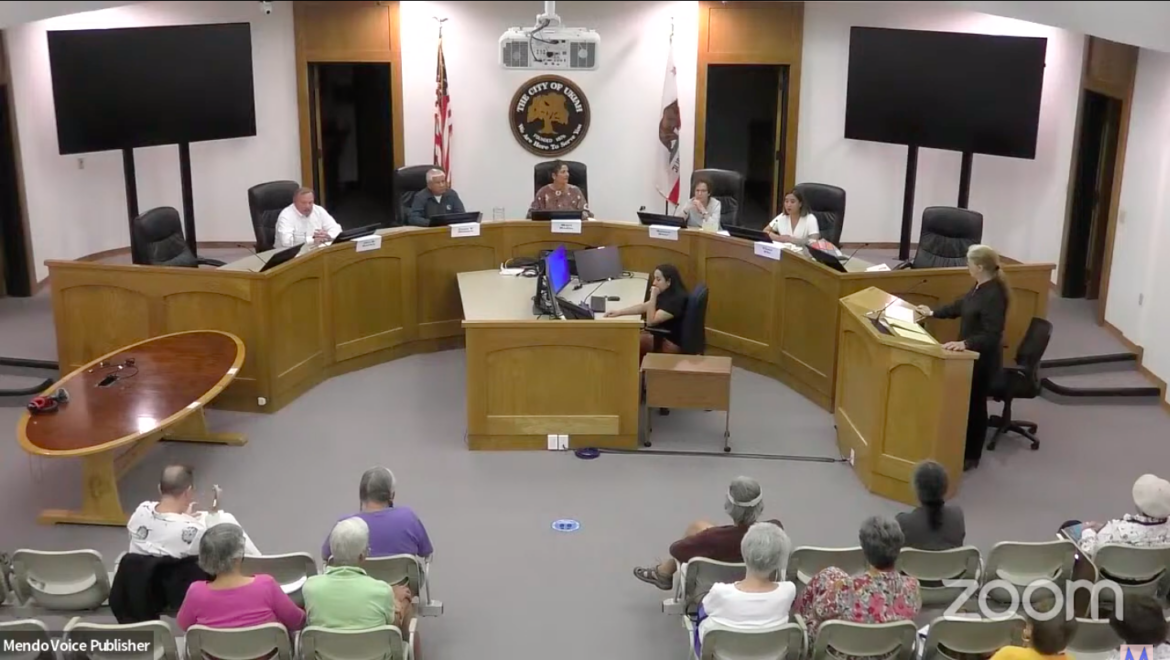 The candidates also answered questions addressing the potential expansion of Ukiah’s city limits and the challenges of keeping young people in the city. Mayor Jim Brown, who was appointed as mayor by the city council and is running for reelection, said his priority on the council if elected would be economic growth. Annexing the neighborhoods on the outskirts of Ukiah would lead to economic growth, he said, and growth will make the city more attractive to young people.

“I really believe that annexation, especially 20 years down the road, is going to be very important for the economic growth of Ukiah, keeping Ukiah a very robust city,” Brown said during the forum.

Each candidate concurred on the issue of annexation, agreeing that it would create unity within the city and keep young people in town. But one of the reasons young people don’t stay is the lack of affordable housing, the candidates said.

Several of the candidates lauded the work of the current city council for passing a climate emergency resolution in June, which declared a climate emergency in Ukiah and committed the city to adopting renewable energy. Incumbent Juan Orozco said incentivizing citizens who replace their cars with electric vehicles and increasing alternative energy production with solar powers will help fight the climate crisis in Ukiah.

“My passion is complete streets,” Rodin said. “Making streets accessible and safe for users of all ages, wider sidewalks, wider bike lanes so that it really is inviting to get out of our cars.”

Addressing housing issues, tackling climate change head-on and making Ukiah a more attractive city for young people was among the top priorities of each candidate. Rodin said that by expanding the city limits more residents will pay property taxes that can go toward improving existing services to make Ukiah an even better place to live. The city could build out its infrastructure to be more environmentally friendly, creating open spaces for new businesses to bring young workers to the city, which would help diversify Ukiah, she said.

Representatives from the two sales tax measures on the November ballot came to the candidate forum to answer questions about their respective measures.

Ukiah Friends of the Library President Michelle Savoy explained the quarter-cent sales tax measure (Measure O on the ballot) would improve county libraries. About 40% of the money generated from the sales tax would go toward capital improvements for branch libraries, Savoy said. The rest would help retain and hire more employees to keep services afloat and would allow the libraries to buy more materials, including books.

County Supervisor Maureen Mulheren and several county fire chiefs answered questions about Measure P, another quarter-cent sales tax measure that would go toward fire prevention in Mendocino County. About 40% of revenue from the sales tax would be divided evenly among each county fire department and the rest would be divided on a per capita basis among fire districts, Mulheren explained.

Ukiah and Fort Bragg, the two largest fire districts in the county, would receive the most funding — about $1 million for Ukiah and $500,000 for Fort Bragg, Mulheren said. Those funds would help the Ukiah Valley Fire Department purchase new equipment for clearing fire hazards, which should decrease residential and commercial insurance rates, said Executive Director of the Mendocino Fire Safe Council Scott Cratty.

The two sales taxes would replace already-sunsetting tax measures so the countywide sales tax would not increase.
Ballots will be sent to registered voters beginning Oct. 10. Eligible voters have until Oct. 24 to register to vote. Ballots can be mailed or can be dropped off at official ballot dropboxes. Find more information on what’s on the ballot here.