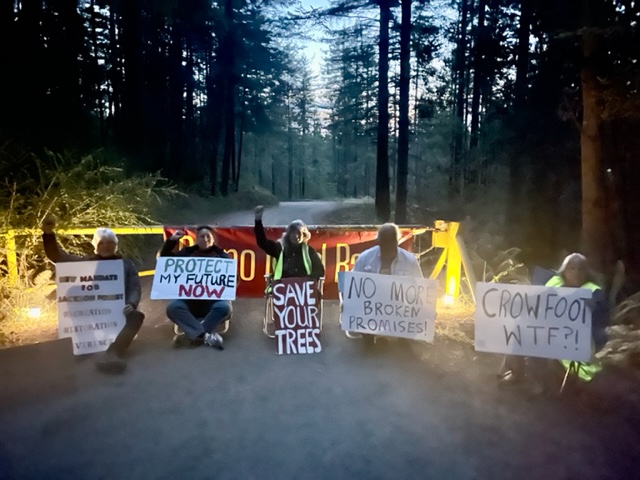 MENDOCINO Co, 9/8/22 — Feeling blindsided after Cal Fire resumed work on timber harvest plans (THP) in Jackson Demonstration State Forest (JDSF) in the midst of negotiations for tribal co-management, activists protested logging in the forest several times over the past week. Several people blocked an access road to the Red Tail THP near the Camp One campground on Wednesday morning, according to a news release from Redwood Nation Earth First!.

He confirmed that, as California Natural Resources Secretary told The Voice last week, the state still plans to complete work on existing THPs. Andersen said the state “look[s] forward to productive conversations related to the forest management plan now, and in coming months.”

Work on these THPs had been paused for about eight months, until Cal Fire announced they would resume work a week after debuting the tribal co-management vision in August. Coyote Valley Band of Pomo Indians Chair Michael Hunter said he had not been notified of the plan to resume timber harvesting, making him question the legitimacy of the co-management proposal. Anderson said tribal partners were told operations in the forest “would resume soon” in a tour with forest scientists Aug. 7, and that Cal Fire leadership called Hunter the day before and the day of the announcement but did not reach him.

Hunter and the Pomo Land Back movement have also announced a fundraiser seeking aid for potential legal expenses in attempts to halt logging in the forest. The Mendocino Voice was not able to reach representatives for comment by the time of publication.

“We currently engage in Government-to-Government consultations with the California Natural Resources Agency and Cal Fire Forestry Departments,” Hunter wrote in the fundraiser’s description. “Still, we are not confident these consultations can save ALL the 2nd Generation Redwoods from being logged. We are preparing for legal action and are reaching out to our friends to help raise money for legal expenses.”

Activists also continue to call for a moratorium on logging in JDSF, arguing that the Red Tail THP in particular violates Option A regulations around how Cal Fire meets sustainable objectives; Option A is a subset of the JDSF management plan meant to determine the effect of management on long-term forest yield and sustaainability. Activists say that Cal Fire may be cutting beyond its 35% basal area limit (per Option A) on old growth redwoods for older forest development areas in the Red Tail THP, with as much as 50% of the basal area being removed in some zones of the THP; Some of these concerns were reinforced when Cal Fire led a walk-around in Red Tail with Hunter and members of the Coalition to Save Jackson Forest in May, according to a news release.

“Without an explanation, it appears that the [registered professional forester] chose to exceed the limit in order to remove more timber, and thus more profit, from the forest,” Linda Perkins and Matt Simmons, both of whom are involved in the Coalition, wrote in a 2021 letter to Cal Fire officials, which activists included again in a follow-up letter this May. “Given that Red Tail is located in one of the few areas of JDSF that is at least theoretically meant to develop into an older forest, it is deeply disappointing to see that Cal Fire is writing and approving THPs that do not conform with their own Option A and management goals.”

According to a July letter responding to concerns raised in May, shared with The Voice by Andersen, Cal Fire said its evaluation showed the Red Tail THP did not violate Option A, and that the THP and Option A discussions were approved in multi-agency consultation. Resource Management Communications Officer Christine McMorrow wrote in an email to The Voice that the percentages above, referenced in the letter from activists, identify “the modeling parameters that were used but do not represent all the possible treatments that may occur within the Older Forest Development Zone.”

Activists said they have issued an “Earth First! Stop Work Order” to Cal Fire in regards to this THP.

Rallies also continued in JDSF over Labor Day weekend, with groups of between 10 and 24 activists brandishing posters against logging and promoting Pomo tribal sovereignty at Camp One off Highway 20 on Friday and at Babcock Park in Willits on Monday.

“We want to give them a taste of what’s going on,” Bill Hild told The Mendocino Voice off Highway 20, on a busy afternoon for tourism. “We’ll give them something to think about and ask their friends about when they get to Fort Bragg.”

Correction: An earlier version of this article incorrectly stated that activists had not received a response to letters regarding the Red Tail THP.