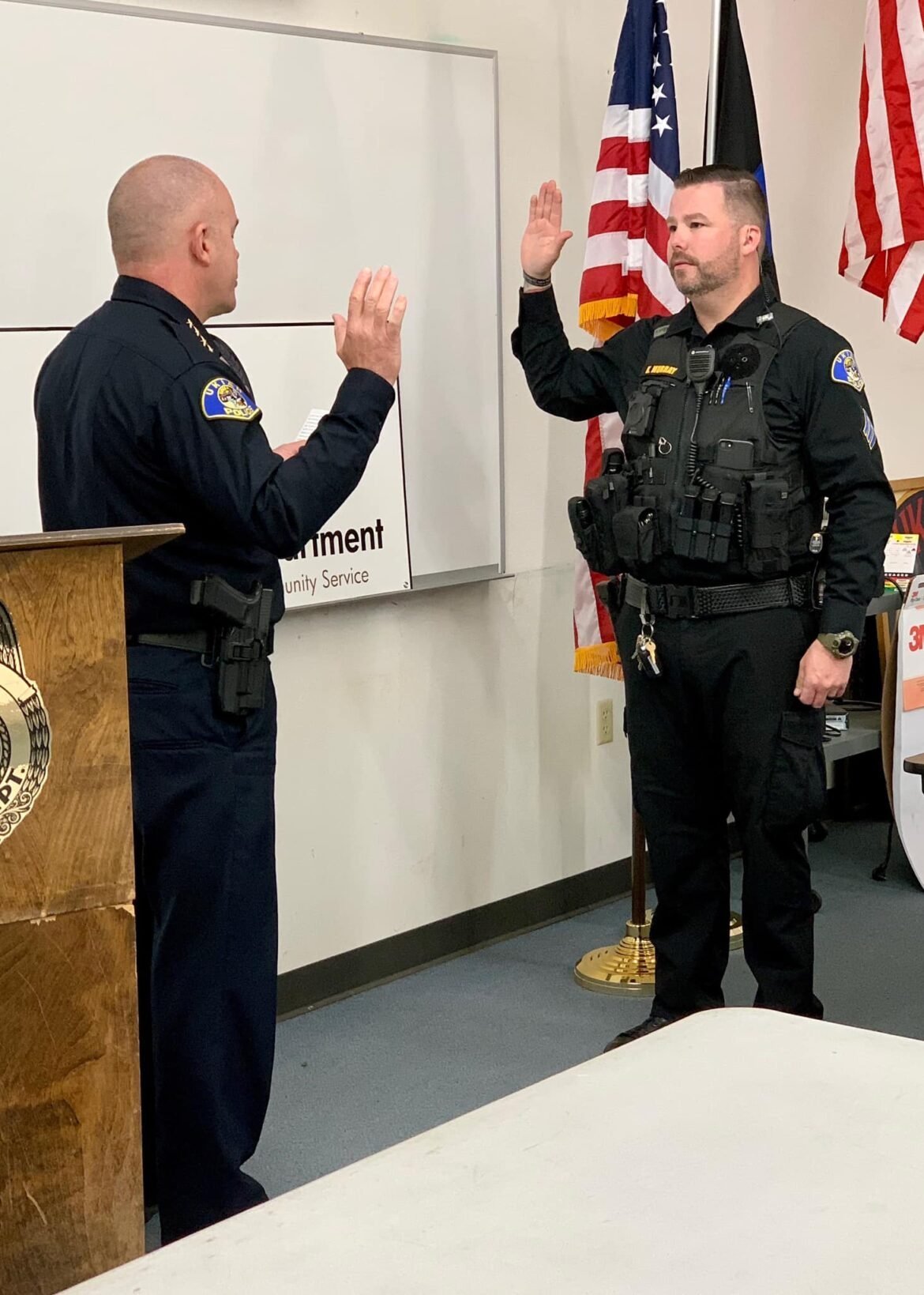 Kevin Murray was promoted to sergeant just months before he was charged with sexually assaulting a woman he pulled over on patrol. Photo courtesy of UPD's Facebook page.

EDITOR’S NOTE: Murray pleaded no contest to a felony, but the original version of this article inaccurately stated that he pleaded guilty. The copy below has been corrected. The Voice regrets the error.

Updated 8/24/22 12 p.m. — Read the latest developments in Murray’s sentencing hearing in our update.

Updated 5:30 p.m.: Editor’s note: This article has been updated to include photos from a protest held outside the Mendocino County Superior Court in Ukiah today.

UKIAH, 8/23/22 — Attorneys for Kevin Murray, a former Ukiah Police (UPD) sergeant who pleaded sexual assault charges down to a felony charge of dissuading a victim last month, filed a sentencing memorandum Friday asking the Mendocino County Superior Court for probation rather than jail time. In response, a protest was announced on social media. The action was scheduled outside the courthouse Tuesday, in advance of Murray’s sentencing hearing Wednesday afternoon.

The plea form filed on Murray’s behalf agrees to a minimum sentence of 16 months in state prison and maximum sentence of four years. Probation officers have recommended just twelve months in custody, according to Murray’s lawyers with Andrian, Gallenson and Gaskell in Santa Rosa, but the lawyers argue Murray only pleaded guilty no contest on an understanding that no jail time be imposed.

“Extensive discussion took place between the court and counsel prior to the change of plea in this matter,” attorney Stephen Gallenson wrote to Judge Carly Dolan. “This was a negotiated disposition and the court indicated that it did not intend to impose any additional jail time so long as there were no surprises regarding Mr. Murray’s background.”

Murray had been charged with sexually assaulting one woman in 2014 and another in 2020. He’s also accused in civil court of sexually assaulting a detective on an out-of-county work trip in 2013. A pattern of burglary emerged, given that he allegedly gained unlawful entry into a residence or hotel room prior to the assaults. In additional criminal complaints filed months after his initial arrest, Murray was also charged with possession of methamphetamine in his locker at work, possession of an illegal assault weapon as defined under California law, and threatening or intimidating a witness.

His attorneys dispute an aggravating circumstance to the charges, arguing that Murray was inaccurately accused of disguising his identity in text messages to a victim. They maintain he “disguised his phone number,” but his identity was clear: “For this reason, the defendant disagrees that this is an aggravating factor under the specific circumstances of the case.”

They’re asking the court for a suspended sentence, in which Murray would stay on probation so long as he keeps out of trouble. Murray was arrested on suspicion of petty theft by the Lakeport Police Department in November, but Lake County prosecutors moved to dismiss those charges “due to civil compromise” on June 28, and a jury trial scheduled for July 20 was canceled.

In support of their argument, Murray’s lawyers also submitted letters from character witnesses including the defendant’s wife, mother-in-law, ex wife and other family members, which are included in the linked document above. Those intimate (but now public) records describe a long-term struggle with alcohol, which is believed to have been a factor in Murray’s crimes.

The civil lawsuit against Murray and the City of Ukiah alleges that Murray’s assaults occurred within a broader pattern of sexual harassment and workplace misconduct at the Ukiah Police Department. That lawsuit is still proceeding, with a hearing scheduled in October.

According to a firearms relinquishment report filed Aug. 17, Murray surrendered five unspecified weapons to the Lake County Sheriff’s Office January 29, 2021. Probation officers have asked for the court to order those weapons be destroyed, “if not otherwise sold or transferred…” The former police officer is now prohibited from possessing firearms as part of his felony plea.