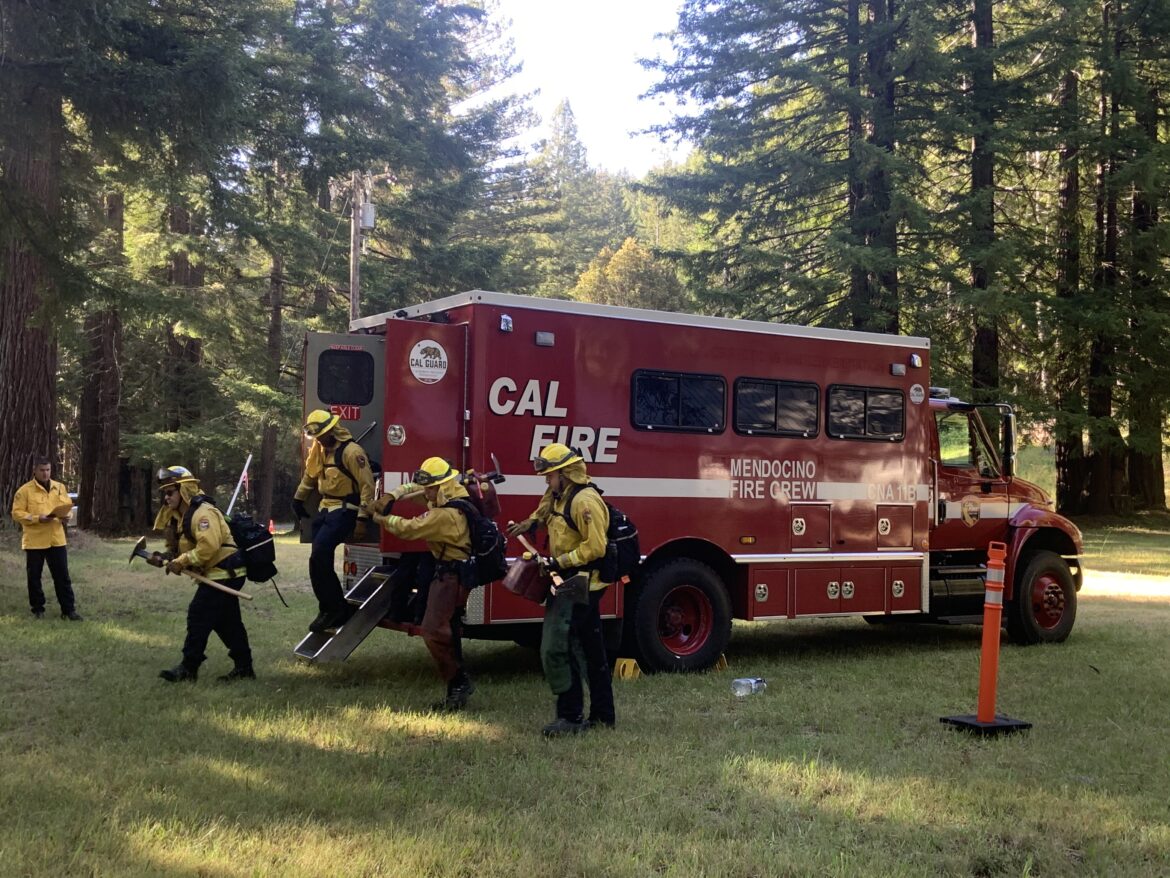 FORT BRAGG, 6/5/22 — Around 100 CalFire personnel gathered in Jackson Demonstration State Forest early Wednesday morning for a day spent unloading tools, hiking for miles, clearing brush, and deploying shelters in a series of timed drills to prepare for what their unit chief says will be “a fire year.”

The goal of the firefighters and their captains at Mendocino’s 2022 Crew Readiness Drill was simple: be the fastest and most thorough team, while at the same time identifying any weak points to address in further training.

“We are expecting an arduous fire season and we’re preparing for that,” said Luke Kendall, the new chief of CalFire’s Mendocino unit. “That’s what we’re out here doing, is assuring that our crews are ready.”

As of this week, CalFire’s Mendocino crews and contracted crews are fully staffed, with 430 CalFire personnel employed in the county – and not a moment too soon. “We’re already seeing fires kick off,” Kendall explained.

Hiring began in March, and while firefighters would have been laid off around mid-October fifteen years ago, these crews have a much longer job ahead.

“We’re looking at a nine-month season, and it really depends on what the weather does for us here,” Kendall said. “We could be chasing fires in December as easy as we can be chasing them in June. That’s what I mean by fire year: it used to be just in the heart of the summer months, and it’s just not that way anymore.”

Six crews competed in Wednesday’s drill at the Chamberlain Creek Fire Center on Hwy. 20 between Fort Bragg and Willits: four fire crews employed directly by CalFire, one crew contracted from the National Guard, and one crew of 18- to 25-year-olds from the California Conservation Corps.

Chamberlain Creek Fire Center used to be staffed entirely by people incarcerated by the California Department of Corrections and Rehabilitation; now that camp has become a CalFire center. Just one of Mendocino’s fire crews is staffed by incarcerated people this year. Patricia Austin, a CalFire public information officer, said that team will run drills on a different day.

All crews are accompanied by a CalFire captain, have the same gear, and are trained to the same standard. The necessary skills are the same, too.

The day began at 8 a.m. with a tool-out, where crews unloaded their fire trucks to be assessed by proctors on their apparatus knowledge and the condition of their tools. From there, crews set off on a four-mile hike up a ridge of varying terrain to reach the next challenge: line construction.

At the drill, the firefighters were tasked with clearing as many feet of line as possible in one hour. Firelines are one of the most essential mitigation measures to fight wildfires; crews construct them to keep a blaze from spreading by clearing a given piece of terrain down to bare mineral soil, slicing away timber, grasses, roots, and anything else that might burn with hand tools and chainsaws.

In the final portion, the crews showed their shelter deployment capabilities. “Basically they have to demonstrate communication, so what they would say on the radio if they were being overrun by fire and knew that they were going to have to deploy shelters,” Austin said. “And then they’re timed on how fast they deploy [the shelters] as a group and how they do it.”

Chamberlain Creek Fire Center’s Crew 5 won the day, with 14 crew members constructing 490 feet of line in one hour. But the annual drill’s primary goal is to ensure that crews will function as a well-oiled machine even when surprised with the unexpected — something that happens all too often when it comes to wildfires.

“Sometimes on the fireline, things are not perfect,” Jonathan Pierce, another CalFire public information officer in the Mendocino unit, said. “You’re often given tasks that you’re not prepared for [in drills], to see how you’d handle under a stressful situation.”

Fire season itself can defy prediction and best-laid plans. While Kendall said that controlled burns are the leading fire starter in Mendocino County, and more populated areas along highways are the most likely to see fires, he also said fires are equally possible inland or along the coast. “I can’t really tell you where the ignition might happen,” he said.

And while late rains can be a boon in some senses, they don’t necessarily mean a quieter fire season – especially in Mendocino County, where the “area grows very well” and so is “ripe with fuels.” Kendall said he has not yet instituted a burn ban for the season, in part because he wants to encourage people while the climate is still rainy to clear “defensible space” around their homes, so flying embers cannot find tinder to grow into flames.

“It’s a double-edged sword, because the late rains bring on grass, and this year we’ve seen a really good grass crop,” he said. “That does lead to … good grass that’s standing there, and if you get a fire in it it’s going to burn really quickly and put off a lot of heat, and it’s going to be harder to fight. But it’s nice because right now [the grass] is all green, and last year at this time it was all brown. It was shorter, but it was more ripe and ready to burn earlier in the year.”

Kendall’s role, as he sees it, is primarily to make sure the firefighting crews are equipped to protect Northern California and its people. “That’s why it’s so important that right now they’re working very hard on getting prepared for fire season,” he said.

He thinks they’re in good shape, saying, “I’m proud of them and I think they’re going to do very well this summer.”

Mendocino County residents can learn more about burn permits here, and an application for defensible space assistance is available here.

Kate Fishman reports on the environment and natural resources for The Mendocino Voice as a corps member with Report for America. You can reach her at [email protected] or at (707) 234-7735.