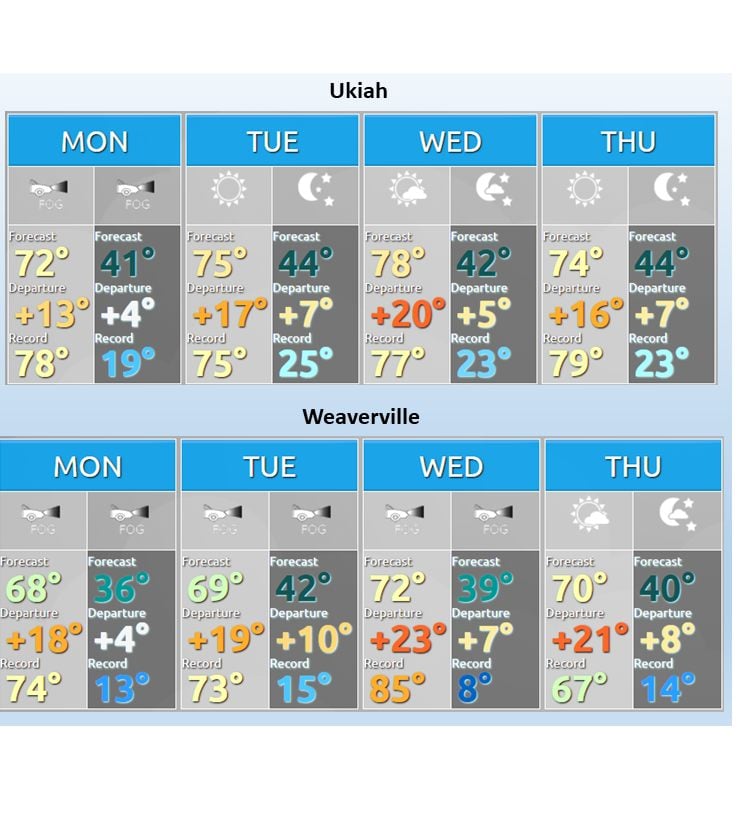 MENDOCINO Co., 12/1/21 — If this warm spell lasts through Sunday as predicted, Ukiah may be in the midst of the fifth warmest 9-day period it’s ever seen for this time of year since record-keeping began in 1893. The last time we had a warm stretch like this in late fall was 2002. The Ukiah area has averaged 73 degrees for the past four days during a time when the average high temperature is in the high 50s, according to the National Weather Service (NWS) Office in Eureka.

“These kinds of temperatures would not be notable for early to mid-November,” said Alex Dodd, lead meteorologist at the NWS Eureka office, “but after Thanksgiving into early December, this kind of sustained warmth is very unusual, and might only be expected once every 20 years or so.”

Since 1896, summer and fall temperatures have gone up by 1.4 degrees, spring temperatures have increased by 2 degrees and winter temperatures by 3 degrees across the contiguous U.S., according to the U.S. Environmental Protection Agency. Along with the increasing temperatures, a recent study is indicating snowpack, which the state’s populace relies on for drinking water, may be virtually nonexistent within a couple decades. These changes will have major implications for the state’s water system and agricultural industry that experts say we need to address now to avoid immense hardships in the future.

That’s not necessarily the case for coastal communities that have had temperatures closer to the mid-50s for this time of year, according to NWS data. The average high temperatures in Fort Bragg for the past four days has been 57 degrees. The temperature difference is the result of cooler ocean temperatures and the marine air hugging the coast, Dodd said, which is “true really no matter what the time of year to a certain degree.” However, during stormier stretches in past Novembers, the temperatures didn’t vary as much and the weather inland might actually be cooler than on the coast because the ocean temperature might be slightly warmer than the air mass associated with the cold weather.

The warm weather isn’t part of the La Nina phenomenon, which has more of an impact on the regions to the north and south of Mendocino County, Dodd said. “We’re in between the stronger influences to the north and south,” he said, “where the Pacific Northwest will get colder, wetter winters and then the southern portion of California and the Southwest get warmer and drier winters.” The warm temperatures are resulting from the nature of the pattern we’re in with a “fairly high stout high pressure system situated overhead and across the eastern Pacific,” Dodd said.

By Sunday night or Monday, the area will get rain, but not too much. “A quarter inch at the most,” Dodd said. “Something to kind of wet things down.” There are some signs that will be followed by a few days of dry weather before the longer-term wetter, stormier pattern sets in around Dec. 9 or 10. “Take that with a grain of salt,” Dodd said. “Long-term predictions are often difficult.”
For the most up-to-date weather information, visit weather.gov.