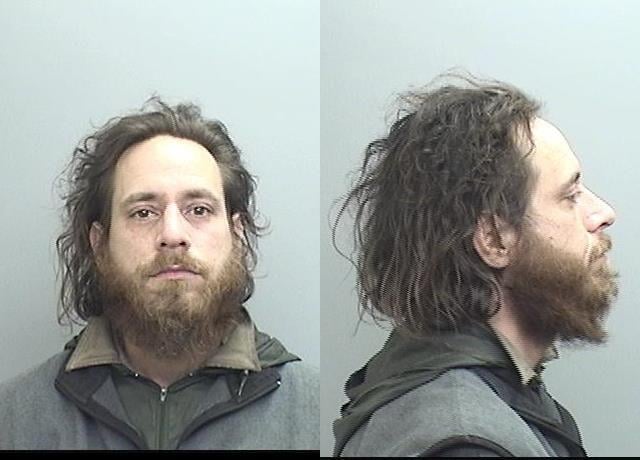 MENDOCINO Co., 11/11/21 — William Allan Evers, an ex-convict with two prior strikes who has been dubbed the Red Bearded Burglar, pleaded not guilty to attempted murder of a peace officer and five counts of burglary Monday morning. Evers will be represented by the Public Defender when he returns to Mendocino County Superior Court for a preliminary hearing at 9 a.m. Tuesday, Dec. 7. Meanwhile, bail has been set at $2.5 million, according to minutes from his arraignment.

Evers was arrested Thursday, Nov. 4, in the “Doughnut Shop” area of the Salmon Creek Forest, near Albion. He spent more than 25 weeks on the run after allegedly firing a gun at Mendocino County Sheriff’s Office (MCSO) Dep. Thomas Kelly while fleeing the scene of a burglary May 12. The Mendocino Voice filed a public records request for body-cam or dashcam footage from the shooting, but county staff say Kelly was not wearing a body-cam and the dashcam on his patrol vehicle did not record any evidence of the shooting as the crime scene was out of frame.

MCSO has posted about Evers on Facebook roughly a dozen times since Feb. 10, 2021, asking for the public’s assistance in identifying the suspect at first, then to help them track him down. They also detailed at least 10 incidents in which law enforcement tried to take Evers into custody, including the following incidents: May 12, the day Evers allegedly shot at Dep. Thomas in 3000 block of Cameron Road are of Elk, May 19, in the Cameron Road area of Elk; June 14 through June 16, in the 3000 block of Cameron Road in Elk; June 28 in the Cameron Road area of Elk; July 3, also in Elk, Aug. 30 in the 31000 block of Middle Ridge Road in Albion; Sept. 2 in the vicinity of Albion Ridge Road, Navarro Ridge Road, Middle Ridge Road and the Salmon Creek drainage; Sept. 6 in the vicinity of Albion Ridge and Navarro Ridge roads; and then finally Nov. 3 and Nov. 4, in the 29000 block of Albion Ridge Road and the nearby Doughnut Shop.

The Mendocino Voice reached out to MCSO Capt. Greg Van Patten Tuesday requesting a full list of MCSO calls for service associated with Evers’ since he was identified as a suspect, but no response was received by Wednesday evening. We will report back on that when more information is available.

The ongoing search affected hundreds of Mendocino County residents, particularly on the coast, and became a significant source of anxiety for the community — as evidenced in the comment sections of the Facebook posts linked to above. During that time Evers was spotted on a number of home security camera systems. Investigators circulated a handful of those images, including one in which Evers can be seen wearing what appears to be a holstered handgun on his chest while he burglarizes a residence, and another in which he appears to be carrying some kind of rifle outdoors.

While Evers was at large in the woods on the Mendocino coast , the 10-year anniversary of the six-week manhunt for murder suspect Aaron Bassler passed, drawing comparisons between the two fugitives — both of whom were photographed toting firearms in the wild as they evaded capture. Fire season came and went, during which deputies were deployed to multiple major incidents in Mendocino County, as well as the Cache Fire in Lake County and the Dixie Fire in Plumas County. All the while, MCSO struggled with staffing due to a shortage of patrol deputies amid active recruitment efforts. MCSO, with assistance from other law enforcement agencies, has gone to extraordinary effort and expense to capture Evers — and it took nearly nine months.

The Mendocino Voice reached out to District Attorney David Eyster on Tuesday to find out if Evers is facing any new charges and what kind of sentencing range he might face if convicted on all current counts. We’ve also requested a copy of his agency’s investigation into the alleged May 12 shootout between Evers and Deputy Kelly. No response to either inquiry had been received by Wednesday evening.