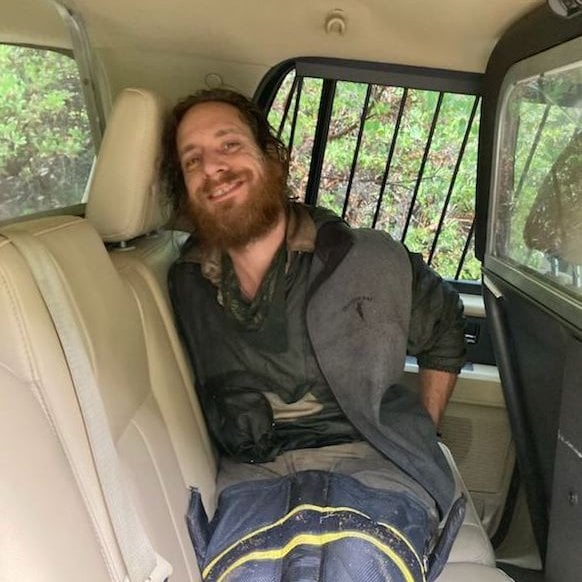 UPDATE, 9:30 p.m. — Public records indicate William Evers was booked into the Mendocino County Jail on suspicion of attempted murder at 6:42 p.m. MCSO Capt. Greg Van Patten said in a Nixle alert that Evers was seen crouching near an outbuilding in the 29000 block of Albion Ridge Road around 9:15 a.m. Wednesday. Responding deputies searched the area for hours, and spotted Evers at a distance late that afternoon near part of the Salmon Creek Forest commonly known as the Doughnut Shop, but he was able to escape once again.

Deputies returned to the Doughnut Shop with a K9 unit around 10:15 a.m. this morning and found Evers in brushy terrain. He tried to flee again, but the dog got ahold of his lower leg and deputies were able to take Evers into custody before he could run off. They allege he kicked the dog in the struggle.

Editor’s note: The Mendocino Voice filed a records request for body-cam footage from the alleged May 12, 2021, shooting that led to attempted murder charges being filed against William Evers. County staff responded, saying MCSO deputies are not currently equipped with body-worn cameras. They offered to check dash-cam footage from patrol vehicles at the scene, but the alleged shooting reportedly happened outside the camera’s field of view.

MENDOCINO Co., 11/4/21 — Fugitive burglary suspect William Evers, who has been the subject of extensive search efforts since he allegedly fired a gun at Deputy Thomas Kelly while fleeing the scene of a burglary May 12, was arrested in Albion this afternoon, according to the Mendocino County Sheriff’s Office (MCSO). Evers had a warrant for his arrest and was charged with attempted murder of a peace officer and burglary in a six-count criminal information filed July 1.

Capt. Greg Van Patten described the straps around Evers’ lower body, visible in the arrest photograph posted by MCSO, as a “‘wrap’ leg restraint system,” typically used on individuals who are thought to be combative or potentially combative. “Evers’ history of non-compliance and assaultive behavior (shooting at a Deputy) was the reason for utilizing the restraint system on his legs,” Van Patten said in an email.

There were a number of incidents this summer in which law enforcement personnel converged on Mendocino’s coastal neighborhoods to search for Evers, but in each case the suspect managed to slip away into the woods due to terrain that presented challenges for pursuing deputies. Two SWAT officers were injured responding to a reported sighting of Evers in the 32000 block of Navarro Ridge on Sept. 6. Van Patten said shortly after that a K9 officer was bit by his dog in a struggle with Evers. The other suffered a mild sprain twisting his knee during a foot chase in the dark. Neither deputy missed any work as a result of their injuries, Van Patten said.

His repeated success at evading capture became a frequent point of discourse in comment sections as the search dragged on — but news of Evers has been less frequent in recent months. The defendant was wanted in connection with at least five local burglaries, as well as a laundry list of special charges and allegations. Evers also has two prior strikes from convictions for burglary in Humboldt County in 2007 and for making criminal threats in Shasta County in 2014. If convicted of a third strike, Evers could be facing a substantial period of incarceration.

“I know the neighborhood will sleep better tonight thanks to the diligent work of deputies to apprehend (Evers) without incident,” District 5 Supervisor Ted Williams said in an email. Williams’ district includes the South Coast, the region in which Evers was most frequently seen and ultimately arrested .