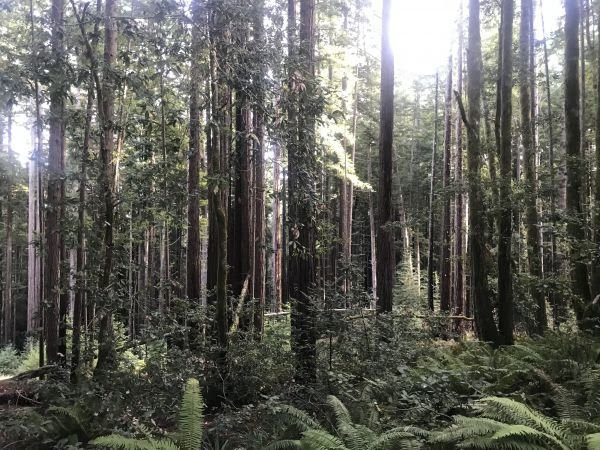 MENDOCINO Co., 11/9/21 ⁠— The rain is here and that means the ground is too soft for Cal Fire’s contractors to continue logging in parts of Jackson Demonstration State Forest (JDSF) with approved timber harvest plans (THP). Activists say they’re still maintaining a presence in the forest until there is a moratorium on logging in the forest and Cal Fire listens to the community’s input about how the forest should be managed.

“It’s been seven months since direct action started in Jackson Demonstration State Forest,” said Michelle McMillan, a spokesperson for the direct action group Mama Tree Mendo. “And in those seven months, there’s been very little movement as far as recognition of community concern. There’s been some lip service and the halt, but the halt was not in direct response to community concern. It was not a halt for conversation.”

Cal Fire and the members of the Jackson Demonstration State Forest Advisory Group (JAG) say their meetings are an opportunity for the community to offer feedback on THPs and the forest’s operations, but activists say those meetings are a farce. They shut one down in August.  If you want to attend a JAG meeting, there’s one happening next at 9 a.m. Tuesday, Nov. 16 at Camp 20 along Highway 20 in JDSF. The agenda is here.

Cal Fire has five ongoing THP areas — Parlin 17, Chamberlain Confluence, Red Tail, Caspar 500 and Soda Gulch ⁠— within the forest that are closed to the public through Feb. 1, 2022 because the agency’s contractors are conducting timber operations. Pacific Gas & Electric is conducting its own logging operations in the forest, as well as “additional fuel reduction,” to remove trees that are near its transmission power line running roughly parallel to Highway 20. But the pace of operations is naturally slowing down because the forest doesn’t have the road systems to support logging in the wintertime, said Kevin Conway, Cal Fire’s state forests program manager and manager of Jackson State. Nor do state regulations allow for it.

“Almost all of the ground-based operations are complete for the year to protect from soil compaction and generating runoff that could go into the water courses,” Conway said. “So it’s all what we call cable operations. There are machines that sit at the road and use cables to bring the trees up to the road for processing from down the hill.”

Even cable operations face interruption when there’s heavy rain, but can continue after a drying day or two, Conway said. One of the agency’s timber operators is also expected to put in a bridge, which it recently received, over Blue Gum Creek on the trail for the Caspar 500 over the winter. “So that is now sitting in our possession and ready to go in as soon as we get back out there to start working,” he said.

Activists began disrupting timber operations in the forest after learning about a THP in the Caspar 500 during this past spring. They’re removing significantly sized second-growth redwoods, which are the most fire-resilient trees in the forest, McMillan said. “In removing them, they’re decreasing the capacity of the forest to survive a fire,” she said.

Fire resilience isn’t the only goal, however. Cal Fire is mandated by state law to manage the forest with three goals in mind — research, recreation and demonstration of forestry practices. The only money the agency’s staff get to manage the forest also comes from activities within the forest and Conway said a negligible amount of that cash flow originates from recreation permits. Much more comes from selling timber harvests, though the agency cuts 40% of overall annual growth, which is about 2%.

Still, a broad coalition of people and organizations are calling for the management of the forest to change as the climate crisis intensifies. Their calls for legislators and state officials to move quickly have not yet inspired a hasty response. In a Sept. 20 letter to Michael Hunter, tribal chairman of the Coyote Valley Band of Pomo Indians and one of the people leading the push for changes in the forest’s management, 2nd District State Assemblymember Jim Wood agreed that the policies needed to be reviewed and changed.

“I agree that until these policies have been reviewed and changes made, no new timber harvest plans should be considered,” Wood wrote. “However, the plans that were developed under current guidelines should not be halted unless they do not meet current law.”

Conway said Cal Fire is still committed to working with Coyote Valley and has a separate government-to-government consultation meeting planned in JDSF the day after the JAG meeting.