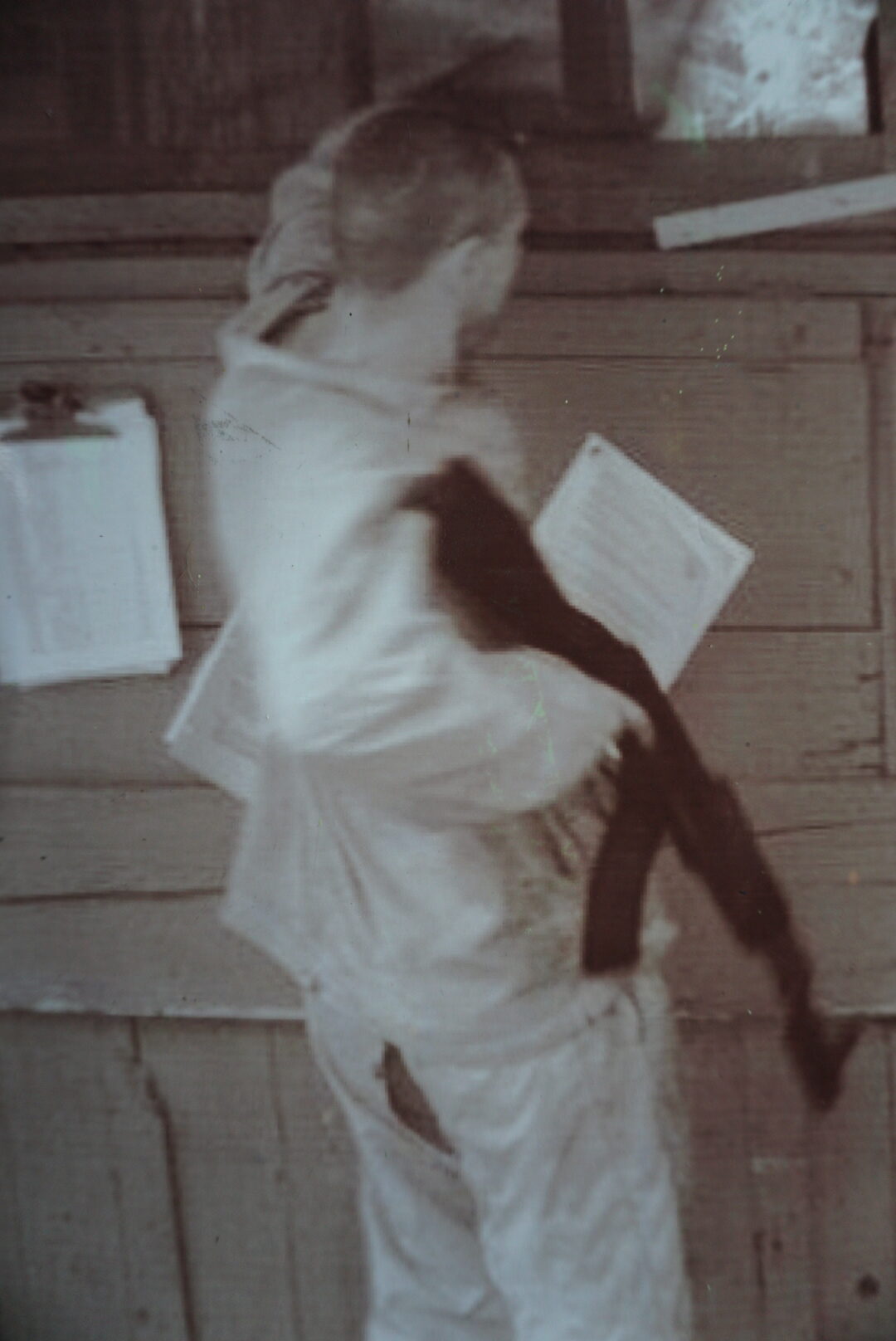 FORT BRAGG, 10/1/21 — Ten years ago today three SWAT officers from Sacramento County established an observation post about a quarter-mile from Sherwood Road. This position, and a number of others, was picked based on the suspect’s route between the scenes of several recent burglaries in the area and some help from a bloodhound named Willow. Aaron Bassler had been on the run for more than a month. He was suspected of two murders, and had previously exchanged gunfire with law enforcement — so when they saw him approaching with his rifle at ready, they took the initiative.

“Without giving a verbal warning, Deputy (Matt) Owens fired on Bassler,” investigators wrote in District Attorney David Eyster’s report on the shooting. Bassler didn’t immediately go down, however, or lose his grip on the rifle. “Believing there still to be a risk, Deputy Owens fired again, joined now by the (other) two deputies.”

Owens fired a total of six shots. His teammates fired three rounds each. Bassler died before he could return fire. That’s where it ended, more or less — but it started nearly two months earlier, with what was initially reported as a possible bear attack on Aug. 11, 2011. The body of 42-year-old Matt Coleman had been found in the Cape Vizcaino area of Westport, propped up in the open door of his vehicle. Investigators ultimately determined he’d been shot, and had used the vehicle for cover in what looked like an attempt at escape. Detectives figured out it was a homicide within the first hour of the investigation — but the rumor of a fatal mauling lingered until Coleman’s death was reported as a homicide in the Fort Bragg Advocate Aug. 18, 2011.

Coleman, a conservation steward with the Mendocino Land Trust, had been well known and well liked. The mysterious circumstances surrounding his death left the coast on edge. There was no suspect identified at that point. It wasn’t until the fatal shooting of Fort Bragg city councilman and former mayor Jere Melo more than two weeks later on Aug. 27, 2011, that the full extent of the threat became clear; a man with a rifle was killing people in the woods outside of town.

Ian Chaney had been out with the victim doing security work, investigating a bunker that had been dug into the soil and ringed with barbed wire on private timber land outside Fort Bragg. It looked like an illicit cannabis operation in initial reports, but instead they found opium poppies growing in a terraced garden near the Skunk Train tracks. The following excerpt comes from the district attorney’s report:

“As the men were looking south, Chaney heard crackling leaves behind and above the men. He whispered to Melo, ‘I think he’s right behind us.’ The two men turned around to the north and saw Bassler hidden in brush about ten feet above and behind the men. Looking directly at Bassler, Melo announced, ‘Hey, what the f*ck are you doing over there?’ Bassler immediately responded that he was an FBI agent and opened fire with what Chaney believed at the time to be a fully-automatic AK-47 assault rifle. Chaney heard three quick shots in rapid succession and, after the third shot, Chaney saw Melo ‘spin like a top,’ falling hard and sliding a short distance down the hill. Close enough to see the whites of his attacker’s eyes, Chaney, recognized the gunman as Aaron. Dropping to the ground, Chaney took cover against the bunker. Chaney returned fire with his 9mm semi-automatic handgun. Bassler then stood up and began ‘unloading’ his rifle on the spot where Chaney was seeking cover. Outgunned, Chaney decided to slide down the hill, reporting that he could hear bullets whizzing by his head, as the trees around him were being hit by bullets in rapid succession. As he slid down the hill, Chaney was also calling for Melo. At one point, Chaney, while looking back, observed Aaron standing on Melo’s back and looking downhill towards Chaney as Bassler continued to fire on Chaney. Seeing Bassler trying to advance on him through the brush, Chaney got to his feet, used trees as cover, and ran hard from the area, continuing to return fire to keep the attacker back.”

Chaney fled toward the railroad tracks and caught a ride out of the area with a railroad worker on a speeder cart, 9mm at the ready in case Bassler fired on him again. Chaney contacted law enforcement several times during his escape, including at least two calls to 911. The following is a partial transcript from the dispatch recording:

Chaney: Okay, listen to me right now. I’m being shot at …

MCSO Dispatch: Where are you at?

Chaney: I’m out in the woods and I think Jere Melo has been hit. I got … [several gunshots are heard in the background]

MCSO Dispatch: Where are you at?

Chaney: God damn it. [tones as if buttons are being pushed on Chaney’s cell phone keypad]

Chaney: I’m out in the f*cking woods. [loud shuffling noise]

Chaney: Are you still there?

Investigators found bits of tin foil candy wrappers  that had been used to smoke marijuana at both of the crime scenes, and DNA found on the foil linked Bassler to both crimes. A warrant was issued for his arrest on suspicion of multiple murders as well as the attempted murder of Ian Chaney. People started using terms like “double-murderer” and “serial killer,” to describe the suspect at the center of the ongoing manhunt. There were numerous possible sightings reported, but Bassler was not found during the subsequent searches.

The next development in the investigation occurred when someone stumbled into a camp where Bassler was staying near the railroad tracks Sept. 10, 2011. He later told investigators the fugitive was paranoid at first, but the two smoked a joint together as Bassler calmed down. He was informed of his status as a wanted man, “and it was suggested that Bassler either surrender or flee the area.” The witness said Bassler still had the rifle, as well as a handgun, and when deputies arrived at Bassler’s vacant camp they found a second bunker at that location.

Nearly three weeks later on Sept. 29, 2011, an apprehension team from Alameda County encountered Bassler along a dirt road in the Larkspur area 14 miles east of Fort Bragg. One of them snuck up behind Bassler with a pistol, and ordered him to get on the ground, but a gun fight ensued. Bassler flanked them, circling around to engage from a different angle, and fired two shots at the deputies — with one of the rounds reportedly passing in between two of their bodies and narrowly missing them both. Bassler disappeared back into the treeline that morning, but two days later he was fatally shot in an ambush by the deputies from Sacramento County.

“Over the past 10 years, there has not been a single day when I haven’t thought about this case,” former Mendocino County Sheriff Tom Allman told the Mendocino Voice when contacted this Thursday.  “The pain that the victims’ families experienced was truly agonizing.”

Long before Aaron Bassler murdered Matt Coleman, his mental health was a cause for concern to the people who cared about him. James Bassler, Aaron’s father, believed his son to be an undiagnosed schizophrenic. Laura Brickey, Aaron’s mother, told investigators that her son had become paranoid and prone to fits of anger after a bad LSD trip. Friends said that earlier that year, he had become increasingly radical and talked about surviving armed encounters with the government. Bassler had multiple contacts with law enforcement prior to the first murder: with arrests for public intoxication in Sept. 2010, and driving under the influence in March 2011. He was booked into jail on both occasions, but at no point was he identified as an inmate in need of help.

“This whole case boils down to the need to improve our mental health services for all, especially for the ones like Aaron Bassler who slip through the cracks of care,” Allman said.

The deep woods of the North Coast are a difficult place to catch anyone who knows their way around. Aaron Bassler demonstrated that. It was reaffirmed a few years later when 45-year-old Shane Miller murdered his wife and their two young daughters in Shingletown in May, 2013, then disappeared into the rugged terrain of the Lost Coast for more than a year despite extensive search efforts. His remains were found on the banks of the Mattole River near Petrolia in Aug. 2014. More recently, a suspect with two prior strikes has repeatedly eluded capture, ever since he allegedly shot at Deputy Thomas Kelly during a burglary investigation in Elk on May 12, 2021.  Bassler probably wasn’t the first person to disappear here — and he certainly wasn’t the last.