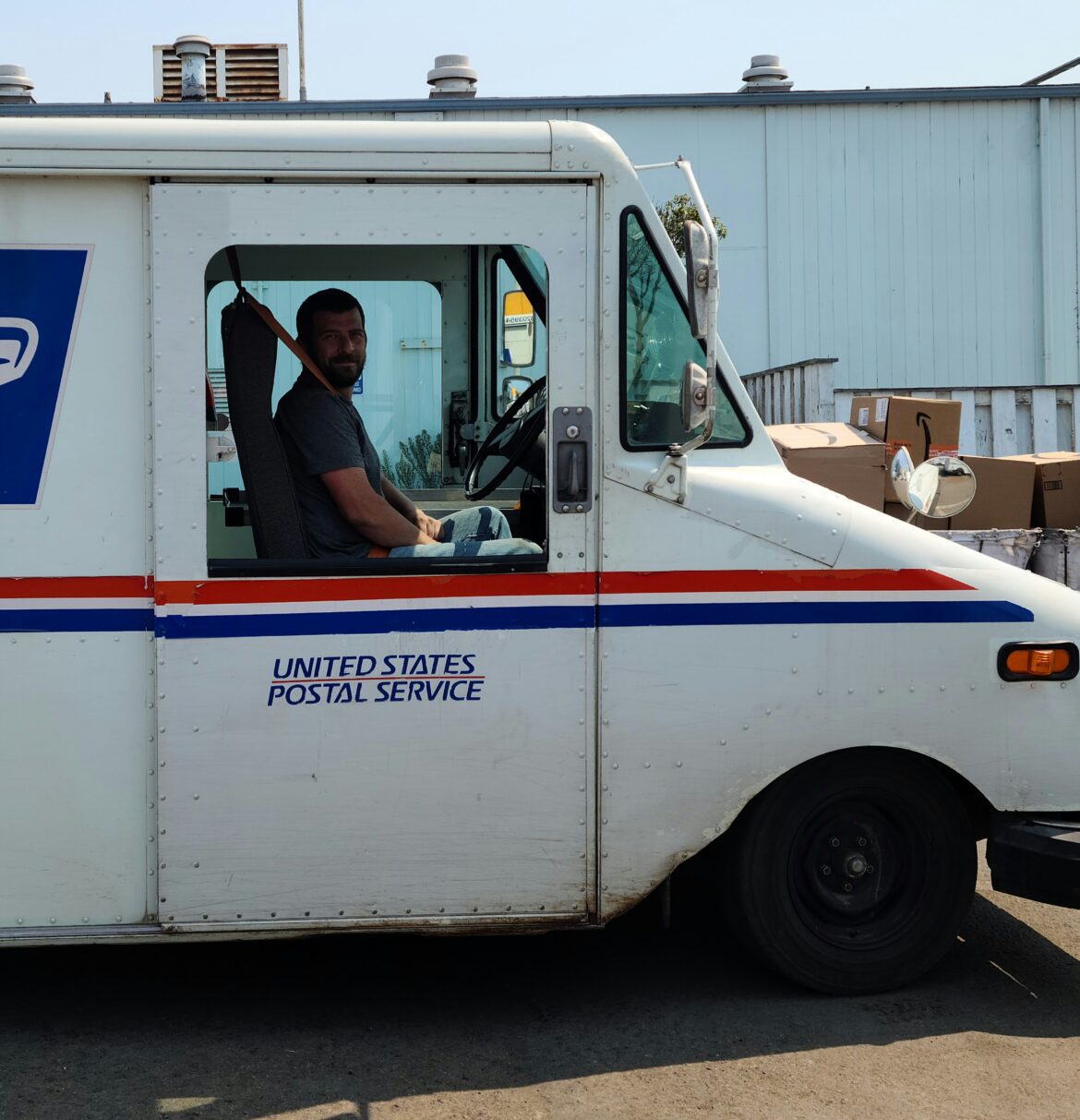 MENDOCINO Co., 8/27/21 — A postal worker driving his route extinguished a small grass fire over the weekend, preventing it from spreading to a nearby home outside Fort Bragg. The Mendocino Voice followed up with the U.S. Postal Service after the mailman’s girlfriend tipped us off to what she described as a “very heroic act.” A regional spokesman put us in touch with Fort Bragg resident Ian Chaney — who was out delivering mail in the 17000 block of Franklin Road around 12:41 p.m Aug. 21, when the fire was reported.

“I saw smoke at first and thought, ‘What idiot is burning’?” Chaney said in a phone call Tuesday afternoon. “I just stopped and went out and asked if there was a fire extinguisher.”

There was, luckily! A stash of four or five extinguishers was found in a nearby building and Chaney says he emptied all of them. Some turned out to be expired, however, and only lasted a few seconds each. It was enough to get the job done, along with some help from a garden hose.

“I figured I’d put it out before it got worse. It was headed toward some brush and people’s houses,” Chaney said. “It would have gotten to the bull pines, that would have been a nightmare.”

When Fort Bragg Fire Chief Steve Orsi arrived on scene at 12:50 p.m. the fire was already out, but an area of grass estimated at 50 feet by 50 feet had been burned. Flames got close to a wooden fence, but it didn’t catch fire, and no property damage was reported at a nearby house.

“The occupant had dumped ashes from his wood stove onto an old burn pile,” Orsi wrote in an email Wednesday. “Apparently there was still enough heat in them to ignite the surrounding grass.”

Several members of the Fort Bragg community reached out to express their gratitude for the mailman’s timely assistance including neighbor Mick Schuessler, who lives down the road from the scene of the fire and described Chaney as a “very nice guy, eager to help” in an email: “Just wanted to give him kudos for his actions, above and beyond, quick decisive action. Definitely minimized damage, and possibly saved a life.—–

Chaney told the Mendocino Voice this was his first close call with wildfire, but failed to admit in our initial interview that this was not his first time being publicly acknowledged for heroism in a dangerous situation. Ten years ago today, Chaney survived the gunfight with Aaron Bassler that killed former Fort Bragg Mayor Jere Melo, triggering a man-hunt that terrorized the North Coast for 36 days. Three sheriff’s deputies with a SWAT team from Sacramento County put an end to that story in the woods early in the afternoon on Saturday, Oct. 1, 2011.

The authorities kept Chaney’s name a secret at the time, fearing for his safety while Bassler remained at large, but Chaney was the guy who returned fire and called 911 — helping first responders hone in on the crime scene’s remote location near the Skunk Train tracks outside Fort Bragg. According to District Attorney David Eyster’s investigation into the shooting, Chaney also provided law enforcement with information about the shooter’s tactics that would later help them bring the armed and dangerous suspect down, as reported in the Fort Bragg Advocate.

Nearly a year later on Aug. 13, 2012, Fort Bragg Mayor Dave Turner issued a proclamation  “Recognizing and Honoring Fort Bragg Resident Ian Chaney for his Brave and Heroic Actions on August 27, 2011.” The city’s online archives only go back as far as November, 2013, but staff at Fort Bragg City Hall have kindly provided a digital copy of that document, which readers should be advised contains a somewhat graphic play-by-play description of the fatal gun fight.

The Mendocino Voice would like to commend Ian Chaney for being in the right place at the right time last weekend and taking action when others might not. We’d also like to commend the property owner for their diligent maintenance of the landscape during fire season — and whoever stashed all those fire extinguishers in a place where they could be quickly accessed and put to use by a local Good Samaritan.