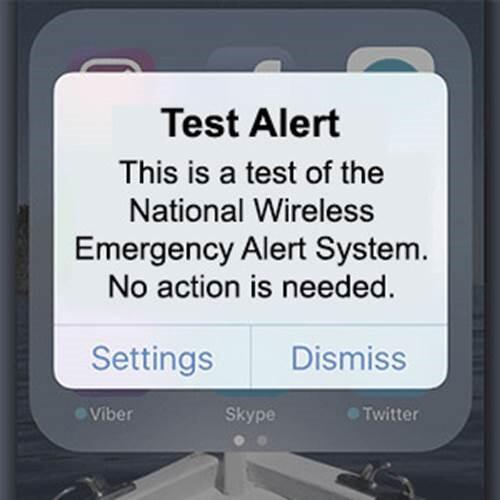 MENDOCINO Co., 8/10/21 — “THIS IS A TEST of the National Wireless Emergency Alert System. No action is needed.”

Fifty-seven smartphone users in Mendocino County are expected to receive that message at 11:20 a.m. Wednesday as part of the Federal Communications Commission’s effort to improve the way we notify and evacuate Americans when wildfires or other fast moving threats are approaching their homes. In order to evaluate the system and make improvements, it has to be field tested, and Mendocino County’s remote coastline and rugged interior terrain make this a pretty good place to put any technology that depends on signal reception through its paces.

“Essentially, the FCC is testing message reception, alerting protocols throughout the system, and our ability to opt-in and out as needed,” said Emergency Services Coordinator Brentt Blaser with the Mendocino County Office of Emergency Services in an email Monday. “Federally, they recognize that rural areas have specific challenges that should be evaluated. The finding will then be included in future guidance, policies, protocols, and hopefully national infrastructure funding decisions.”

Blaser’s focus will be on which smartphone users do and don’t receive the message and where those phones are physically at that time. A survey of those users will be conducted after the test, and the information will be used to determine whether we need more resources in the future, like additional cell towers, and where they need to be built. This particular technology is part of the Integrated Public Alert & Warning System, which includes the Emergency Alert System that many readers are already familiar with from legacy broadcast media like local TV and radio stations. The feds are conducting a simultaneous test of those broadcast capabilities, some of which may be observed in Mendocino County.

Letters sent to AT&T,  Verizon and T-Mobile indicate that the information being gathered Wednesday is of a largely technical nature, with an emphasis on questions like how many milliseconds pass between when an alert was transmitted and when it was received by the end user. More information on those aspects of the test are available from the FCC.

Most of those government entities represent major metropolitan cities or entire states. Harris County, Texas, contains the Lone Star Republic’s most populous city, Houston, with over 4 million residents. It’s safe to say that Mendocino County is punching above its weight in this program, in part because of a previous round of tests conducted in May. This round of testing is expected to target a smaller number of smartphone users, primarily owners of newer model handsets who opted in through newly available settings on their phone.

The Mendocino Voice will be covering the effort to improve local disaster warning systems on an ongoing basis during fire season, and you can help. If you receive a notification as a part of this test Wednesday morning, please consider sending a screenshot of the text and any related communications to [email protected].