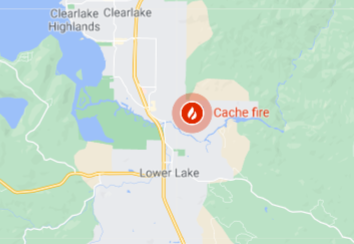 MENDOCINO Co., 8/29/21 — The strategy this year is to throw resources at small fires to stop them from becoming big fires. That means quickly mobilizing a large number of personnel and vehicles for smaller fires. When it works, those resources can go back into service sooner than they otherwise might . It’s a smart tactic, but it has limitations. Resources are already stretched thin, in part because of big out-of-county fires, like the Dixie Fire. Mendocino has been lucky so far, but the situation is tenuous, and people know it. So when the scanner lit up Wednesday, Aug. 21, with frantic reports of a wildland fire ripping through a seniors’ park in Clearlake, a handful of Mendocino County fire agencies sent everyone they could spare.

“It was a pretty harrowing situation,” Ukiah Valley Fire Authority Battalion Chief Justin Buckingham said in a phone call Friday. “Where the fire started was in a densely populated area of trailer parks and apartment complexes. That day we just happened to have an offshore wind, and it was the tail end of a Red Flag Warning.”

Mendocino Task Force 1, a one-time deployment which Buckingham oversaw, included at least three engines and three water tenders, plus an estimated 17 firefighters from six different agencies. Because Lake County is right next door, it’s possible for us to get help on the road very quickly. Our counties have a kind of relationship as neighbors but Buckingham said Colusa, Napa, Yolo and Sonoma counties also sent emergency crews. He explained that the name “Mendocino Task Force 1” tells all the other agencies where our people are from, and if the fire turns into a multi-day deployment it differentiates the first task force from subsequent groups in case they dispatch more than one.

“That fire took off and they needed engines right away, so we were able to cobble together six pieces of equipment plus myself to go over to Lake County knowing that it could turn into a long-term deployment,” Buckingham said. “But the goal was to keep it short-term. Get there, hit it hard, stop the spread … get those resources back in service.”

That sounds like a balancing act. With a large number of resources already out on the Dixie and Caldor fires, and unmet requests for reinforcement at ongoing incidents throughout the state — there may not always be enough to go around. The finite number of engines and personnel mean difficult choices have to be made quickly.

“How do we send enough stuff to go help, but still maintain enough back home to still be effective if we get a fire?” Buckingham asked. “A lot of that has fallen on local fire departments to make those hard decisions. Are we going to send equipment to those larger fires when we know there’s not a lot left?”

The Cache Fire gutted 58 homes (mostly in the first hour while resources were still en route) and ultimately burned 83 acres. Buckingham and his crews deployed to a series of spot fires near State Highway 53 and Morgan Valley Road, cutting lines around the flames before they could burn toward Lower Lake. Mendocino Task Force 1 was gone for just over six hours, and those crews made it back around 7:30 p.m. That was crucial during a Red Flag Warning in which at least five wildland fires were reported and contained in Mendocino County, and the  50-acre Bell Fire still smouldered in the woods off Bell Springs Road.

“That’s the new modern-day California,” Buckingham said. “It’s been this way for the last four or five years. Cal FIre ends up basically getting stripped trying to send enough resources to these large disastrous fires. They still leave resources behind but obviously not as many as they would normally. It makes it a little more challenging. The goal in today’s fire environment is to throw as many resources at it as possible as fast as possible, before it turns into a Dixie Fire. If you can catch it small, not only do you minimize damage, but you also minimize the drain on resources.”

The state’s firefighting resources are “stressed to the max,” Buckingham said, advising Mendocino County residents to be aware of the hot and dry weather this summer. The advice is familiar, but people start fires everyday through inattention or thoughtlessness. Buckingham listed some do’s and don’ts: “Don’t put your cigarettes out in the grass. Don’t mow your lawn in the heat of the day, and be sure that vehicles are in good working order before taking them into fire-prone environments. Anyone towing a trailer needs to be sure they’re not dragging chains.” (Major fires have been traced to sparks from dragging chains, which started fires in dry grass along roadways.) “We don’t need any more fires,” Buckingham finished. “We don’t have the resources to spare.”

(EDITOR’S NOTE: A fire captain who will not be named for the purposes of this report has informed us that any firefighter who gets their name in the paper has to buy ice cream for the crew the following day. The Mendocino Voice staff would like to apologize to Battalion Chief Justin Buckingham. Readers are encouraged to send ice cream to 1500 S. State St.)

When a major incident ignites, evacuations and road closures create a sudden need for manpower that isn’t always available in rural counties like Lake or Mendocino. Once everybody who wants to get out has had the opportunity to do so, law enforcement agencies try to patrol the area — but they’re short-staffed too. So when Lt. Andrew Porter with the Mendocino County Sheriff’s Officeheard about the Cache Fire, he reached out to a counterpart up Highway 20.

“I called him up, and he said they don’t have anybody on scene yet but it sounds bad,” Porter said, so he took two patrol deputies and drove up to Clearlake.  “I could hear the scanner traffic, it was frantic … ‘I have to get out because of the fire,’ ‘I’m going to be trapped,’ and these are deputies over the radio.”

When they got to the command post, Lake County deputies tasked them with going door-to-door in the evacuation zone. Not everybody was willing to leave, and there’s nothing Porter can do to make them. Some had cars packed, ready to go if the fire got close — but he tried to explain that by the time things got to that point, they might not be able to get out, and first responders may not be able to help. For some, though, it wasn’t their first fire. One resident told Parker that he’d stayed behind during an evacuation once before and saved his home from burning down.

“I explained that by staying they were putting themselves and others in danger, and if the fire comes this way we may not be able to get to you,” Porter said. “They all said they understand.”

There were also residents who wanted to get out and couldn’t do it on their own. While going door-to-door, Porter found an elderly woman with a walker who could not self evacuate. She’d called a family member to come and get her, but he was stuck in traffic on the other side of a road closure a few miles away. Porter got her into the front seat of his patrol vehicle, loaded her walker into the back, and got her to safety by coordinating with her relative by cellphone.

Porter understands that some residents will refuse to evacuate, saying that deputies will not physically remove individuals who choose to stay behind on their own property — but he urges readers to consider that when authorities issue an evacuation order, they do so because danger is imminent. It’s time to get out. And those who stay behind could easily be mistaken for looters if they leave home to check on a neighboring property, especially by out-of-town deputies assigned to patrol for looters in a community they’re not familiar with.

“We’ve experienced looting in our county in past fires, everywhere there’s been evacuations in the last few years has had looting,” he said. Even during the recent Oak Fire evacuations in Brooktrails, they observed suspicious individuals in the area on bikes, motorcycles and four-wheelers. “If we do an evacuation we feel that it’s incumbent on us to do looting patrol.”

That takes a lot of patrol cars, and for officer safety they try to put two deputies in each vehicle. Last week Porter saw a request to send 44 cops to the Dixie Fire because of the scope of that incident and how many counties had been affected so far. The request is ongoing, Porter said, and last he checked it hadn’t been filled. It’s a heavy lift right now. Police agencies all over the state are having difficulty recruiting and retaining personnel. And that includes the MCSO.

“If we have a major incident in our county we are going to be in dire straits,” Porter said. “And it’s just a matter of time, unfortunately. This is a statewide problem. Everyone’s having the same issue.”

Some years the big fires burn in Lake County, or Lassen, but some years they hit home. Four years ago when the Redwood Complex tore through Mendocino and Lake counties, it was one of the biggest and deadliest fires in the history of the North Coast. Forty-four people died in conflagrations across Northern California during that first night. Cal Fire later dubbed it the “2017 fire siege.” While fire agencies can bring in crews from other states, however, the enforcement powers of local cops tend to stop at the state line. When a major incident occurs in Mendocino County, the sheriff’s office can rely on help from probation officers as well as municipal police from Willits and Ukiah — but only if they have personnel to spare.

“Everybody helps,” Porter said, including our neighbors in Lake County.