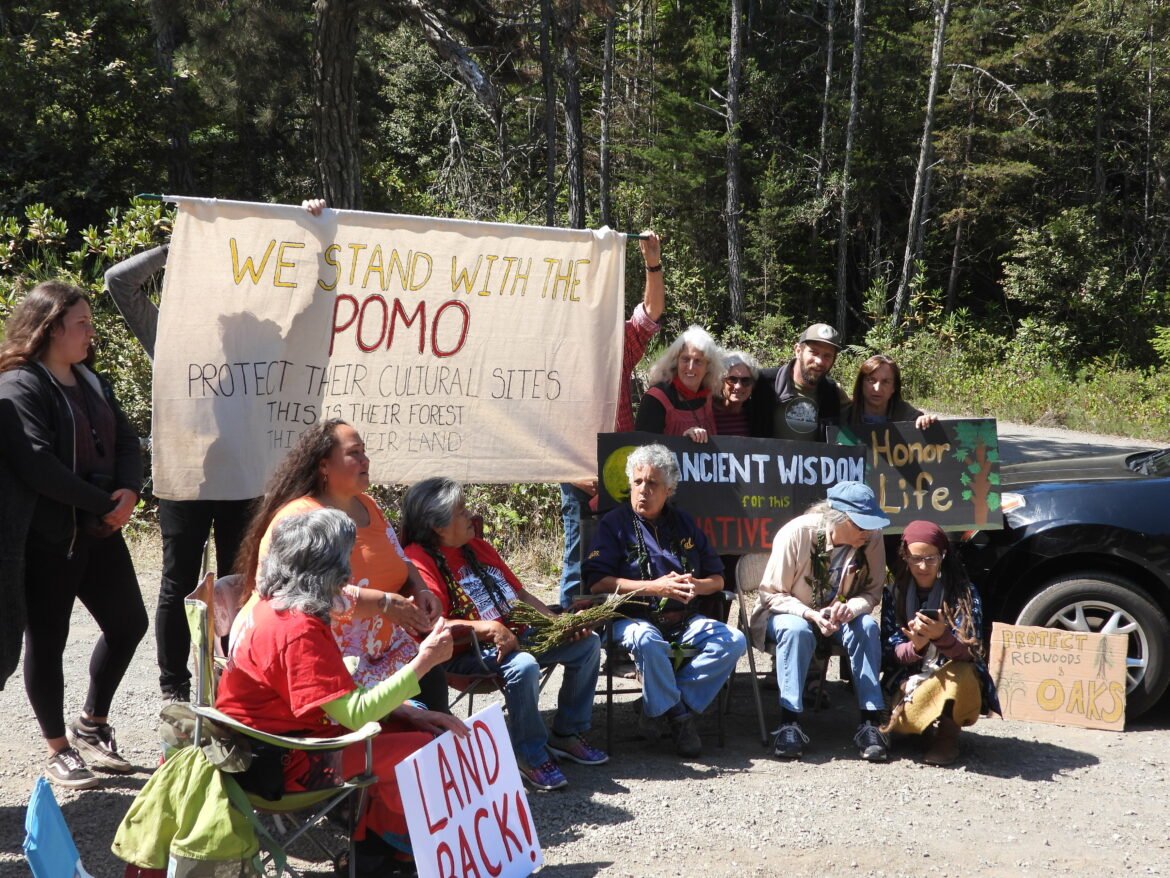 CASPAR, CA, 9/15/21 — A forest consultation tour involving Cal Fire and three representatives from the Coyote Valley Band of Pomo Indians broke down Tuesday morning over the presence of a group of activists who had gathered for a prayer circle at the main Caspar entrance to Jackson Demonstration State Forest. (Read all our reporting on the Jackson Demonstration State Forest controversy)

The Pomo representatives did not end up taking the tour with Cal Fire.

Priscilla Hunter, her partner Polly Girvin, and tribal timber harvest plan consultant Linda Perkins, came to the gathering of more than 80 people and reported Cal Fire did not want to participate as planned out of worries counter protesters might show up, the three said.

The tribe has requested a government-to-government consultation about timber harvesting in Jackson State Forest and was set to start  the process with tours of three forest sites on Tuesday. Cal Fire is representing the state in the process.

The waiting crowd of local activists sang, participated in ceremonies, prayers and heard speeches for about an hour — until three of the four Coyote Valley tribe representatives chosen to deal with Cal Fire showed up. The fourth is J.P. O’Brien of Fort Bragg, a climate scientist and not a tribal member. Ui Wesley, a Native Hawaiian, provided prayers and led the greeting of the Coyote Valley group when they arrived. Several farmers gave special gifts of food. Others gave money or other items and everyone joined in celebrating Native peoples and the land.

Girvin told the group that Cal Fire wanted to take a tour of another timber harvest plan off State Route 20 first and wanted to wait for the protesters to dissipate before coming to Caspar at the end of the day. That was the reverse order that had been planned and wasn’t acceptable to the three.

“I told them we have our Native American sister from Hawaii who has already been on board to bless us and to sing to our ancestors, and we can’t just walk away from that. We just want to pray to the ancestors with another indigenous sister who’s offering us prayer.”

“I explained that you’d all been nonviolently trained, and that you knew how to de-escalate and been trained to de-escalation,” Girvin said. She called to determine if there were any counter-protesters but could not reach anyone due to the lack of cell service in the forest area.

“I said ‘I can understand if you don’t want to be in our prayer circle, because of the separation of church and state, I honor that principle as well. You could just move to the side, you know, we would just get out and have a prayer circle’…Then they were coming up with this and that and this and that, and I finally said ‘that’s it. I gotta go.’ I find this exchange insulting,” Girvin recalled as she addressed the crowd.

Girvin said she called Cal Fire after the forest prayer meeting broke up to tell them they would not be going on the tour that day after all.

“Riding down here, I was thinking that this was insulting,” said Hunter. ‘What was the big deal about the prayer circle? I thought I’d bring it up that we were going to have a prayer, and not just surprise them,” said Hunter.

She continued, “They didn’t feel like they could respect our ability to be leaders and that we would make sure it was peaceful and OK. We were insulted.”

Cal Fire spokesperson Christine McMorrow provided this response to a request for comment:

“On July 13, CAL FIRE along with representatives of the Coyote Valley Band of Pomo Indians had scheduled a tour of several timber harvest plans. The meeting was to start with a tour of the Caspar 500 timber harvest plan area. Due to the presence of protesters and not wanting to distract from the purpose of the tour, an alternate meeting route and time were agreed upon by both parties. It was jointly decided that both parties would take a break to allow the tribe to attend the prayer ceremony. They were to resume the tour at 11:30 a.m, unfortunately tribal representatives chose not to continue with the tour. An alternate date and time have not yet been scheduled.”

The ceremonies that happened Tuesday were intense as people described their love for the land and their worries about the environmental and global warming crisis underway on Earth. More than a dozen children were among the crowd.

“I thought it went even better than if Cal Fire had come,” said activist Anna Marie Stenberg.

“But I had really hoped they would come and see how we do it, the place of love we come from and that if they came and heard it might really change how they see this,” she said

Stenberg was among those who apologized to Native people for all that had been done to them. Several local farmers, including Gowan Batist of Fortunate Farm, brought food offerings to the tribal representatives.

Activist, and former supervisorial candidate, Chris Skyhawk was among the large crowd there to celebrate Native say-so in the forest.

“The centuries of intimacy people have had with these lands all throughout the North Coast is really astounding. As I hang around more and more with these people I get to know how literally intimate they were and are with it,” Skyhawk said.

“Most people talk about private property, you know, everything has an owner and a boundary. That’s not the Indigenous understanding. There is a real intimacy with every riverbed and every hill, all the trees, all the plants.

Western civilization is just barely, barely beginning to see this, I’m just beginning. I think a lot of people are hungry for it, not just to be supportive of the Pomo but they want to come to understand that themselves. People don’t want to carry around a colonialist mentality, it separates them from their own humanity,” Skyhawk said.

Forest activists have become more bold since logging was stopped due to activists interjecting themselves into active cutting areas. Logging has been largely, but not completely, shut down since June 16 when loggers felled trees while activists were nearby on the Caspar 500 timber harvest plan (THP), sparking local controversy and calling state-wide attention to the protests, including media coverage on KPFA Radio and KQEDs California Report., a press release from two activist groups stated.

More than two dozen activists turned out at 5 a.m. on Monday morning, July 12, to monitor logging activities. “Dividing into four groups, the citizen monitors visited all six of the Timber Harvest Plans[sic] underway in the JDSF, including plans known as Red Tail, Parlin 17, Chamberlin Confluence, Bear Gulch and Soda Gulch as well as the originally protested Caspar 500 plan, where a tree sit in a 200 year old redwood dubbed the ‘Mama Tree’– once marked for cut but subsequently spared following public outcry– has been in place since April. No active logging was observed Monday, although previously cut logs were being yarded, bucked and loaded for transport to the mill,” the press release said.“Activists are demanding a two year moratorium on logging in JDSF so that a host of forest management issues, from Indigenous cultural protection to the climate crisis, can be addressed. The message aligns  with the demands of the broader “Coalition to Save Jackson Demonstration State Forest,” including the Coyote Valley Band of Pomo Indians, the Mendocino Trail Stewards, Redwood Nation Earth First!, the Mama Tree Network, Families for the Forest, the Environmental Protection and Information Center (E.P.I.C.) and more. These demands are presented in a Petition to Restore Jackson Forest, now being circulated statewide, the press release stated.