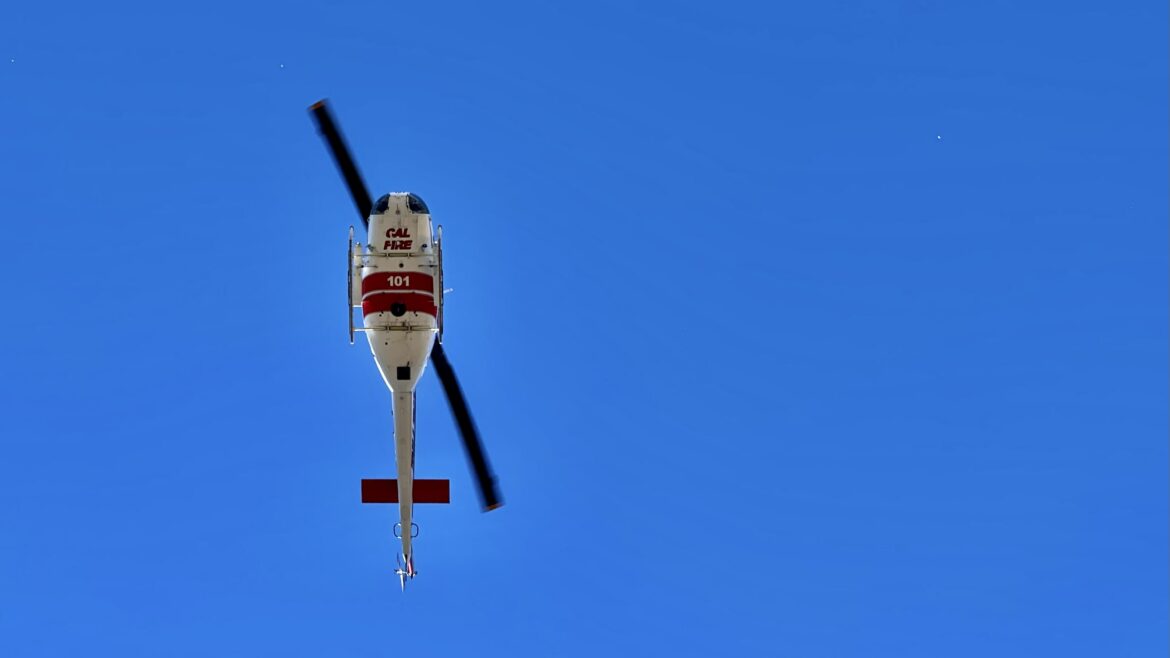 Note: At least two GoFundMe fundraisers have been started for two of the families affected, if you know of others please contact us via Facebook or at [email protected] so we can share. You can donate to help Jerry and Louise Phillips at this link, and to help the Arreguin Family at this link. Please note: The Mendocino Voice has not independently verified these fundraisers.

UPDATE 8:10 p.m. — The Broiler Fire has reached 75% containment, according to Cal Fire’s evening update, and crews will remain overnight to finish containment lines and ensure no hot spots flare up. A total of nine structures were destroyed in the fire, up from the initial assessment last night, including three residences and six outbuildings, with another two outbuildings damaged.

Management of the fire will be transferred from Cal Fire to Redwood Valley Fire at 8 p.m., and so this evening’s report from Cal Fire (read the full report here) will be the final one issued by that agency on this incident.

UPDATE 2:10 p.m. — Neither Cal Fire nor Redwood Valley Fire have provided an official cause for the fire, however, scanner chatter early in the fire did have one firefighter saying that the cause was a lawn mower. Cal Fire’s official report this morning gives the location of the incident as Bel Arbes Rd. and Uva Dr. Early scanner chatter also indicated that the fire was very quickly threatening homes near Glorenbrook Meadows Lane.

Given all that we do not know for the certain the initial location of the fire — however, a vice president from Flow Kana released a statement this morning which did not give any specific information on the location or cause of the fire but did say, “We fully support and are cooperating with officials on the possible cause of the fire. Until the investigation is completed, we have no additional information to share.”

The statement was made by Flow Kana’s vice president for real estate, Warren Neilson. The Mendocino Voice has contacted Neilson for additional clarification and comment, as well as the participating fire agencies for an update on the state of the investigation, but has not received a response.

The fire burned near a quite famous local landmark, the Broiler Steakhouse (the beloved restaurant was unscathed), which also happens to have a very large parking lot. Officials used the parking lot as a staging an rendezvous point. Early in the fire dispatch frequently referred to the fire as being “behind” the Steakhouse, that is, west of the restaurant. The restaurant sits adjacent to, and somewhat above, a large grassy field, which burned in the fire.

Here is the statement from Flow Kana:

Yesterday, Redwood Valley experienced a terrible fire. We are grateful to the first responders who were immediately on the scene and who, through their heroic and coordinated efforts, greatly lessened its impact.

The safety of everyone in the valley, including our employees and neighbors, will continue to be our utmost concern.

While we are thankful to learn that no people, pets or livestock were injured due to the incredible efforts of our local and regional fire, police, and other responders, we are saddened by the loss of at least two structures and the emotional toll of another fire upon our community. We are presently reaching out to community members whose homes have been lost to assist with any accommodation needs and to ensure their health and welfare.

We fully support and are cooperating with officials on the possible cause of the fire. Until the investigation is completed, we have no additional information to share.

ORIGINAL
MENDOCINO Co., 7/8/21 — Though firefighters managed to stop the growth on the Broiler Fire yesterday afternoon, hot spots remain, and fire personnel continue to mop up and build containment lines today. Containment reached 60% as of this morning’s Cal Fire update, up from 20% on Wednesday evening, meaning that fire crews made significant progress overnight.

The fire, which began in the vicinity of Redwood Valley’s Broiler Steakhouse around 2:30 p.m. yesterday and grew to 80 acres, destroyed four structures and damaged one other, and prompted fast-moving mandatory evacuations and road closures in the Redwood Valley and Calpella area.

The fire is being managed by a joint unified command between Cal Fire and Redwood Valley Fire, and the mandatory evacuations were lifted last night. Crews remain on the scene mopping up hot spots and increasing containment lines today. There are a total of 67 personnel still assigned to the Broiler Fire, including one hand crew, two water tenders, and ten engines.