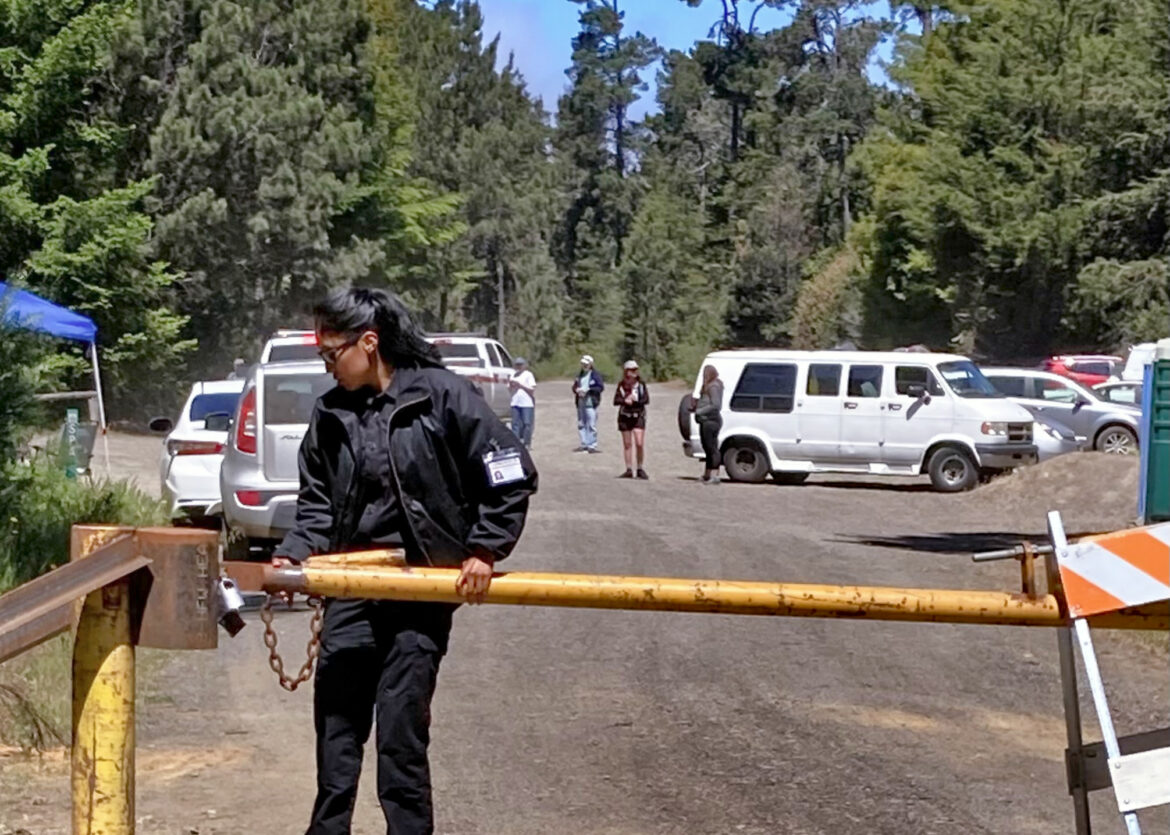 CASPAR, 6/20/21 — Logging in the Jackson Demonstration State Forest (JDSF) has begun, meaning that we’re seeing another iteration of a now old conflict over the ideal way to manage and the role of logging in our region. Activists have taken to the forest, setting up a tree-sit and blocking the entrance of loggers to portions of the forest. We wanted to learn more about what is motivating these protests and went down to the forest to talk to some of the protesters. (Read our full coverage of the controversy here)

Road 500 runs from Caspar into JDSF right along the so-called “Casper 500 timber harvest plan” area which is now an active logging site. For several weeks local activists have been meeting there to oppose the ongoing logging. Throughout the two mornings there was a trickling of dog walkers, hikers and bicyclists entering the forest trails.

Early on the morning of June 15 a group of local activists parked in the unpaved parking area along Road 500 near the JDSF kiosk. At mid-morning, some were seated in folding chairs while others ventured into the forest to monitor logging activity.

Cal Fire has hired Armorous Security, a firm based in Santa Rosa, to monitor the area. One of their employees who only gave the last name Lopez was on duty, she said, “We are to inform the public that Road 500 is closed for safety.” Road 500 is typically open to the public and vehicles.

Bruce Moore who resides in Caspar explained his motivations for joining the protest, “How this logging is happening is disturbing. We want to protect the whales and the redwoods here. If anyone these days was harpooning whales, there would be an outcry — this is the land-based equivalent.”

Several activists members of the assembled group were eager to discuss why they were opposing the logging. “Alder,” a local in his 20s going by a pseudonymous “forest name”, began the discussion.

“I am not against the loggers. They have families to feed, I understand that,” he said. “This area is…a climate regulating powerhouse in terms of carbon sequestration and capturing fog drip. When you cut this forest — the way they are doing it — it creates fuel ladders. It makes everything dry, more wind tunnels and that creates a specific situation that is more prone to fire.”

He continued, “I don’t understand how 600,200 gallons of water are being budgeted for this THP. Cal Fire uses the water to keep the dust down on the logging roads. Wells and water sources are going dry. Farms are asked to ration their water. This is crazy and we are in a drought.” The 600,200 figure is cited in the timber harvest plan.

Caspar resident Jo Laicker said, “My husband and I have been going to JDSF for years, for recreation. We then bought a house here six years ago. I rode my bicycle here over hundreds of miles over the years.”

Laicker told us that she and a group of activists hiked into the Caspar THP 500 on June 14.

“We found a tree measuring 71 inches DBH [diameter at breast height],” said Laicker, “I heard chains saws, and I realized this is where I wanted to celebrate my birthday the next day on June 15, in a ceremony with this tree, that got to be protected.

“For me, the importance of ceremony marks time and place with scaredness. I see these trees as the hope for our children and my, and our grandchildren. I have maybe 15 to 20 years left of my life. I want to spend it in reparation for the damage we did to the earth.”

Laicker re-entered the forest with a few activists under the cover of darkness the next morning to celebrate her 63rd birthday with a ceremony where Laicker adopted the tree. Tree adoption rituals originated in India and are adapted from Buddhists tree ordinations and include ceremonial offerings and gifts. The activists brought along a birthday cake with no candles, rose petals and Hawaiian salt that is used in ceremonies for protection — and sacred tobacco provided by Pomo tribal members for the occasion.

Linda Perkins of Albion monitored timber harvest plans in the 1980s through the 2000s for the non-profit organizations Albion River Watershed Protection Association and Friends of Salmon Creek and the Redwood Coast Watershed Association.

“I have been attending interagency review team meetings in Willits and Ukiah for decades…Although I am retired, I decided to show up for an early morning rally here to see what was going on…I then went to see the tree-sit area and what I saw was the most appalling thing I have seen [in this forest]…Back in the day we called this a whack job. It is not in alignment with any sound silviculture practice, there is no adequate spacing of trees and a disproportionate number of older trees are now being cut,” said Perkins. She added, “I have so many years to compare this to and this makes no sense.”

On June 16, activists again gathered in the same area near Road 500. Elder area residents Kent Graney and Marggie Chandler were seated next to each other in chairs on the road that leads to Road 500. They connected their arms together through an angled steel pipe and into a lock box. This was meant to blockade the road in order to prevent the loggers from continuing logging operations.

Graney, who lives in nearby Mendocino, said, “I am here to hopefully slow the loggers down. I am here to save the trees. They sequester carbon.”

Chandler, a resident of Comptche on the other side of JDSF, is with the non-profit Pacific Alliance for Indigenous Action, an alliance of groups and individuals dedicated to protecting, preserving and restoring the traditional cultures and ecosystems of the Pacific Coast.

“If we can stop this here, we can protect this beautiful forest and maybe make a difference,” said Chandler.

Belvie Rooks, a noted educator and author who lives in the neighborhood nearby Road 500 said, “I first came to the area during the time of Redwood Summer. It was synchronistic. As I reflect upon being here 30 years ago, I just assumed back then that we would not need these types of actions. I want to be here in solidarity. It is about fresh air and trees for our children who are now faced with catastrophic climate change.” Redwood Summer was an environmental campaign organized in 1990 to save the old growth forests in Northern California that were undergoing logging and rapid depletion.

Sarah Rose, a student at the Community High School in Mendocino said, “We use this forest as our classroom and for citizen science walks based on an app that you download that tracks your location. You take a photo of a plant species and upload it to a worldwide database where we can identify plants.” Citizen science is the practice of public participation that contributes to data monitoring and collection programs, and scientific research to increase scientific knowledge.

Diana Salliner was at this gathering of activists with her daughter Marianna Salliner and grandbaby.

“We are a longtime local logging family,” said Sallinen.

“My father started working at the Caspar Mill in the 1940s and 1950s. My grandpa and brothers were loggers too — I am here because I do not want the big trees cut. Grandpa knew back then they were taking too much and he said nothing could be sustainable that you can cut down in an hour or less, and that takes hundreds of years to grow. He went into fishing eventually. You know that second- growth trees here are not old enough and this is our last chance for big trees here,” said Salliner.

S.R. Kelley showed up in his car with his bicycle in a shaded area by Road 600, several hundred feet from Road 500. As he was unloading his bicycle Kelley said, “I ride my bike here and have mixed feelings. There is plenty of justification for running a demonstration forest, but it does need to change. What the tree-huggers are doing is correct and I second the Mendocino Trail Stewards’ position..”

“This area is now commonly used as a take off point for many trails here,” said Kelley, “ Out of towners are spending money here now and not going elsewhere and that is something big to consider in the equation. JDSF has not replaced the trails as they said they would. How could they? It is not in the loggers’ vision, they cut trees, and the only way to know where the trails are is to go on trails with the bicyclists. Do individual tree thinning and not big patches or big trees.”

2 thoughts on “Activist: It’s not sustainable to cut down in an hour what takes 100s of years to grow back”