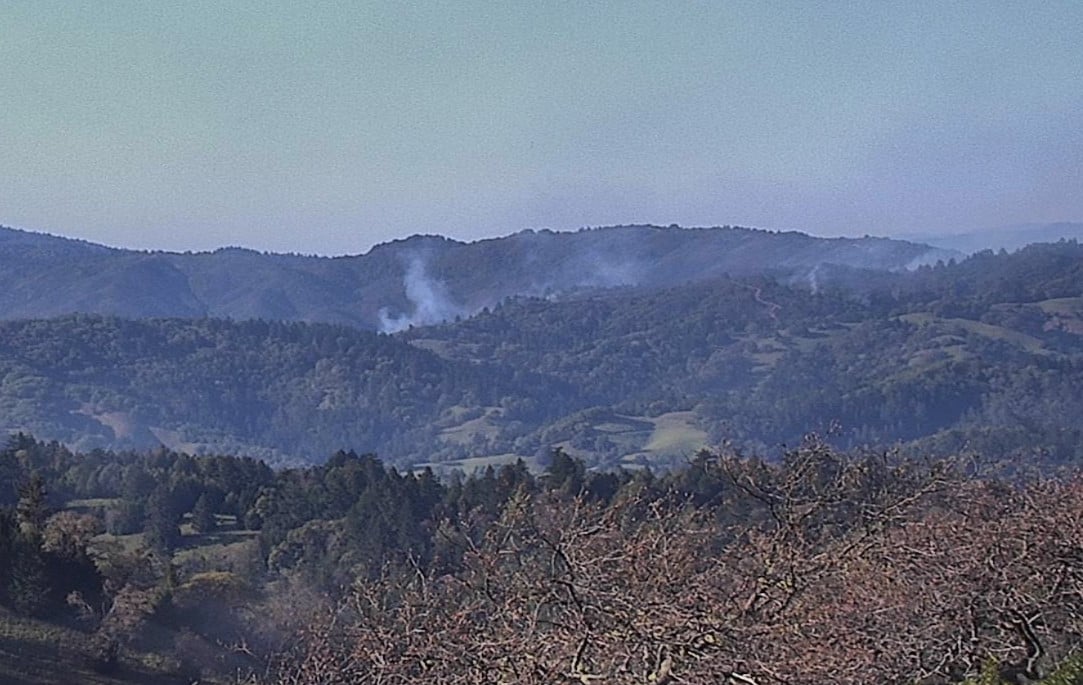 UPDATED 7:10 p.m. — The Turnout fire reached 200 acres today, and remains at around 20% contained, according to Cal Fire’s evening update issued just before 6 p.m. Resources include 73 personnel, five engines, one dozer, one helicopter, four hand crews, two water tenders, and three “other.” Firefighters from other local agencies including Brooktrails Fire, Little Lake Fire, and Ukiah Valley Fire have all assisted since the fire started, as well as inmate crews from the California Department of Corrections. The fire is burning in steep terrain that is difficult to access, and firefighters will be in the scene through the night working to increase containment and address hot spots. So far, no structures have been damaged.

MENDOCINO Co., 4/19/21 — Whatever the escaped burns of the past few weeks portended, the conclusion of this weekend seems clear: fire season is here. The past three days saw at least six wildfires start in Mendocino County. — including the Turnout Fire, which is burning north of SR-253 between Boonville and Ukiah. According to Tricia Austin, PIO for Cal Fire’s Mendocino Unit, the fire is holding steady at around 185 acres as of this afternoon, with winds pushing the fire back into itself and thus diminishing the spread of the blaze. Firefighters continue to battle the blaze with assistance from at least one helicopter. However, at 185 acres on April 19, this fire is a bad harbinger for what lies ahead in this fire season.

The next official update in size will happen at 7 p.m.

The Turnout Fire is burning in heavily wood land, and in very steep rugged terrain which has complicated firefighting efforts.

Another blaze that started in the pre-dawn hours, west of Willits just off SR-20, was the Gulch Incident, which was tackled by Cal Fire and the Little Lake Fire Department. The fire started from a car fire, in a car that had gone over the embankment — however, according to Little Lake Chief Chris Wilkes, no passengers or driver were found.

The fire burned just on the edge of the Jackson Demonstration State Forest, but still within the response area of the Little Lake Department, and reached about five acres, burning in very steep terrain which Wilkes referred to as a “chimney.” The car went off the road at about mile marker 21. As of about 6 p.m. scanner traffic indicated that the fire was fully controlled, and mopped up though it needed to be monitored.

Late last night another fire, dubbed the Feliz Incident, was spotted by a CalStar helicopter. However, this fire was not found by ground personnel and may have been a false alarm.

Here is our coverage from yesterday: