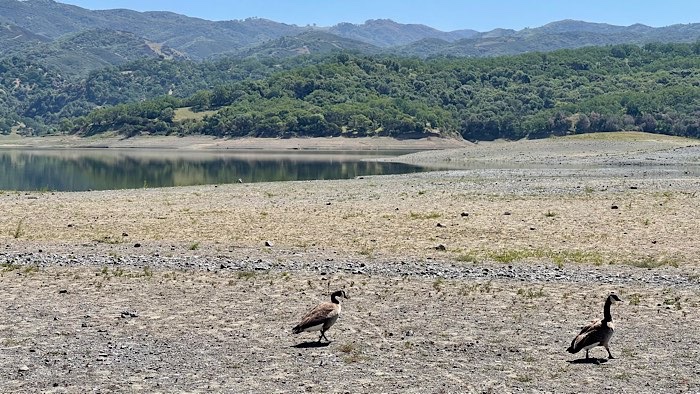 LITTLE RIVER, 4/22/21 — A drought state of emergency has been declared by the Mendocino County Board of Supervisors. On Tuesday, the Board passed the declaration and created an ad hoc drought committee in a four to one vote. Just two days later, Governor Newsom, standing against the backdrop of a historically low Lake Mendocino, declared a drought emergency in Mendocino and Sonoma counties.

Probably the most important part of this declaration is that it may make the county eligible for state and federal funding that could help Mendocino get through the drought this year and improve infrastructure to prepare for droughts in years to come.

District 2 Supervisor, Maureen Mulheren, voted against the declaration. “I voted no because I didn’t have enough information about the wording of the emergency resolution,” said Mulheren in an interview. She expressed concerns about losing local control over water rights and having Ukiah’s pre-1914 water fight compromised.

However, she deferred to Sean White, manager of water resources for Ukiah, for more information.

“Our concern was that the drought declaration would give the state the ability to curtail rights that it normally has no legal basis to curtail,” said White in an interview. “And if you read the declaration that is exactly what’s in it. Our fears were realized.”

Mendocino County, along with the entire state, is at the beginning of what may wind up being the worst drought in California’s recorded history, eclipsing those of 2014 and 1977.

Fort Bragg received less than half of its average rainfall and Lake Mendocino is at an all time low for this time of year.

The past two rain years produced little precipitation, leaving around 99% of the state, including all of Mendocino, in a drought. According to the National Oceanic and Atmospheric Administration drought monitor, over 34 million Californians are living in areas now experiencing drought. For reference, the state’s total population is just under 40 million.

The supes’ declaration was encouraged by Cal Fire Chief George Gonzalez, who urged the board to make an emergency declaration at a special supervisors meeting last Monday.

However, as Supervisor Williams pointed out during the meeting, the Mendocino Cal Fire unit has more resources than in the past. Usually the unit has around 175 employees, according to Tricia Austin, public information officer for the unit. But this year they will have a total of 280, including office and field staff. They will also be getting a Black Hawk Helicopter (which Cal Fire calls a “Fire Hawk”), which can fly at night and will go online around mid-July.

McGourty believes that moving forward, in order to better prepare for droughts, the County should fund a water agency.

“What has really hurt Mendocino County is that we’ve never had a real centralized county water agency to plan out good water systems and look at grant opportunities,” said McGourty. “So much of this kind of infrastructure is paid for by the state and the federal government and we just have missed the boat…because nobody really has the time and the inclination to really understand what’s out there to make improvements to our system. So virtually every community in Mendocino County could use some improvement, Ukiah being the only one that right now is in a very, very good state.”

Due to climate change, weather patterns have drastically changed around the world which, of course, includes Mendocino. This has made achieving water security in our county more difficult.

McGourty believes that storing more water is the solution. “So we have to think a little harder about how to get more water,” said McGourty. “Given the kind of unpredictable nature that our climate is starting to go through, we need to be able to store more water. If we don’t have a steady supply of water, Mendocino County is going to be in a very difficult position going forward.”