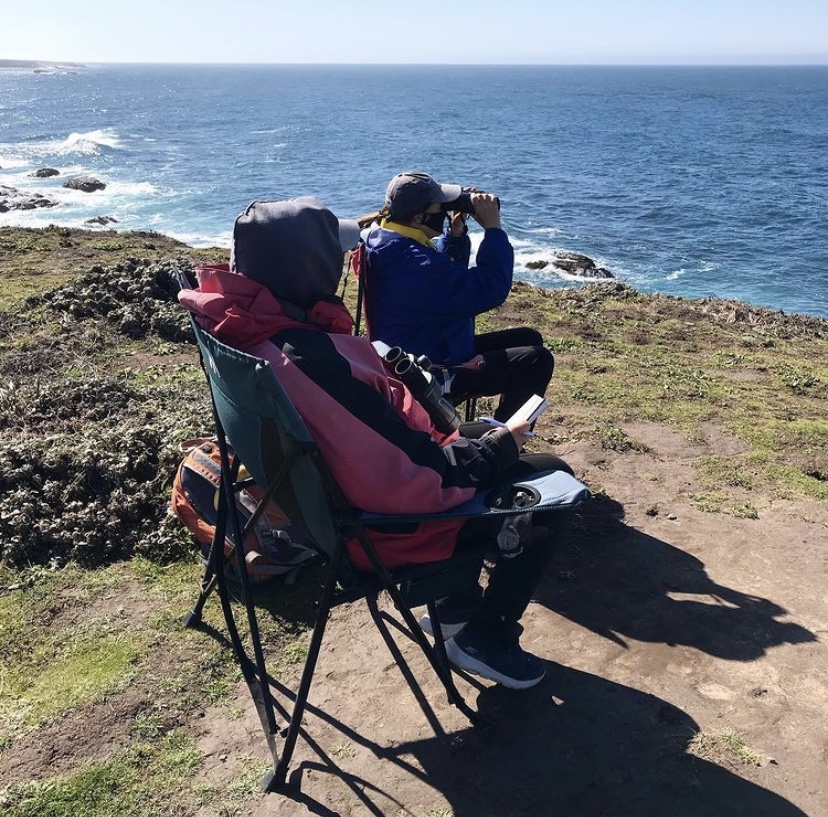 POINT ARENA, 3/25/21 — When the weather is favorable, Teresa (Tree) and Scott Mercer drive out to the end of the windy Point Arena bluff, right near the lighthouse, where they position themselves above the rocky shore line in two camping chairs pointing south, out to sea. Snacks at the ready and binoculars in hand, they settle in for a four to seven hour stint of whale watching.

The Mercers, who are both retired, are whale watching experts. They actually met on a whale watching boat. These days they spend over a thousand hours a year peering out into the wild, turquoise-blue Pacific ocean, braving the wind and the rain and watching whales travel north and south off of the rocky Mendocino Coast, recording whale numbers, movement, and anything out of the ordinary.

Along with other whale watchers who do similar work up and down the Pacific’s eastern shores, the Mercers create a census of the global gray whale population and of other marine species. In general, the gray whale population is stable, but the species has been experiencing an unusual mortality event over the past three years, meaning that more grays have been stranded, washing up on shores, than normal.

Unusual mortality events like this can point to deeper problems in the ocean. All of the information the Mercers collect helps other scientists piece together a story about the health of the ocean and the entire planet, which is always important, but especially so the era of climate change.

“The ocean is so awe inspiring and no two days are alike,” said Tree, who wore a blue windbreaker to shield herself from the cold ocean breeze. “It’s so dynamic out here. I’m never bored watching for whales.”

At times, Tree has seen up to 15 whales moving together, gliding slowly through the ocean, jumping headfirst out of the water and blowing water feet into the air, whales spinning and rolling around in the water to attract a mate, and small (relatively) baby whales, or calves, swimming right behind their moms, hugging the shore as they make their first migration.

“Even on a slow day I can look at the harbor seals, look at the flocks of pelicans that might be going by, yesterday we saw a peregrine falcon,” Tree continued. “Just to be out here it’s a privilege, I consider it a privilege.”

But these past few weeks haven’t been slow at all.

Gray whales spend months migrating from their warm, shallow breeding grounds off the shore of Baja California in Mexico up to their summer Arctic feeding grounds in the Bearing, Chukchi and Beaufort seas. Right now, the 42 to 49 foot, 90,000 pound species is in the middle of that trip, swimming right past Mendocino’s shores.

“Mid-March we found is the peak of northern migration for adult gray whales in this area,” said Tree. On Monday, March 22, the Mercers saw 16 northbound whales.

The Mercers have been tracking whales off of the Point Arena bluffs since 2014, when they started their whale watching operation, Mendonoma Whale and Seal Study.

Eight years ago, Tree and Scott decided to retire from their jobs and spend their winters on the Mendocino Coast to avoid the cold, dark New England winters where they lived beforehand.

“2014 was our first season out here [in Mendocino] and we decided if we’re gonna spend our winters out here, which is now seven months a year, we would monitor the gray whale migration,” said Scott.

Although they’ve only been whale watching in Mendocino for eight years, Tree was a high school biology teacher for 36 years and Scott has been studying whales for almost five decades — conducting research projects, teaching high school and college courses on marine mammals, and captaining a whale watching boat. So between the two of them, they have a wealth of knowledge about the giant species and the ocean as a whole.

Most years, the Mercers work with other whale counters up and down the West Coast, together tracking the species along its entire migration route to create a census of the grays population. But, like everything else, COVID-19 put a wrench in the usual system.

One whale watching program run out of Point Vicente, just north of Long Beach, which has been around for more than 30 years, had to shut down during the pandemic, since it relies on a large base of volunteers to watch the whales from sunrise to sunset during the migration.

The Mercers said that as far as they know, they are the only whale watchers continuing with regular programming this year.

Gray whales are split into two distinct groups based on their location — one in the eastern and one in the western Pacific.

Overall, the eastern gray population, which lives along North America’s coast, is healthy. It was once listed as endangered, but has not dipped down into endangered population levels for around 30 years.

However the western population, which travels along the coast of eastern Asia, is struggling. According to information from the National Oceanic and Atmospheric Administration (NOAA), there are fewer than 300 individuals in the western population of gray whales. The western stock is listed as endangered under the Endangered Species Act and depleted under the Marine Mammal Protection Act.

Although the eastern population is stable, a variety of human and environmental issues threaten the grays along their long migratory journey — entanglement, ship strikes, and starvation.

The gray whales don’t eat and rarely rest along their migration, which takes months. They rely almost entirely on their fat reserves to sustain them during the fall, winter, and spring months.

“It’s a long migration,” said Tree. “It’s incredible. Incredible how they know how to do this. They do it year after year and there are a lot of hazards along the way, vertical lines in the ocean where they can get entangled and ships that get in their way. It’s a hazardous trip but they’ve been doing it for millennia.”

But those harmful, sometimes lethal run-ins with fishing equipment and boats may not be the primary threat to the creatures. Gray whales have been experiencing an unusual mortality event, usually referred to as a UME, since 2019, meaning that an abnormally large amount of grays have been found stranded.

Scientists haven’t directly linked the unusual mortality event to climate change, but some experts, including Tree and Scott, believe that the warming ocean may be contributing to the large numbers of stranded whales.

The National Oceanic and Atmospheric Administration (NOAA) has found many of the stranded grays to be emaciated, pointing towards a lack of food in the Arctic. But more research is needed to make a sure connection.

“One of the big questions up in Alaska is what’s going on with the feeding grounds because there’s lots of changes going on with ice and territories,” said Justin Viezbicke, California Stranding Network Coordinator for the NOAA Fisheries West Coast Region.

“That’s kind of the core of what we’re looking at up in Alaska, what food is available and where it is available, so that we can hopefully better determine how the food issue, if it is an issue, is affecting the gray whales overall,” Viezbicke continued over the phone.

Since the whales don’t eat during their migration, they need to stock up while in their Arctic feeding grounds. And just as a reminder, this is a 90,000 pound animal we’re talking about, so that’s a lot of food.

“It’s so important that they have a good source of food in the Arctic in their summer feeding grounds where they gain all their weight and they increase their blubber layer,” said Tree. “There’s a problem up there now, maybe due to climate change and the melting of the ice in the arctic. I think it’s disrupting the whole food web up there.”

For both Tree and Scott, seeing these creatures that they spend over a thousand hours watching every year stranded or entangled is tragic.

“It just breaks my heart,” said Tree “We had a young humpback whale without a fluke (tail), so it’s fluke was cut off, most likely from an entanglement, and it washed up right on the Manchester beach right behind us there and it was just heartbreaking.”

But they also take those hard moments as learning opportunities, a chance to discover even more about gray whales and possibly figure out how to help them.

“I think that just for us to be observing these animals,” said Tree. “To know their behavior and how they use the area is really important.”

Viezbecke said the whale watchers, like the Mercers, who track gray whale movement up and down the coast are vital to keeping track of and understanding the health of the grays population.

“They’re usually the first ones to notice and alert us to any trends that might be changing. Having information about different trends is very valuable because it provides us more insight to add to the layers of information that we’re looking at and I think the more information we have regarding these animals at various points in their migration the more of a complete picture we’re able to look at to determine how the population is doing.”