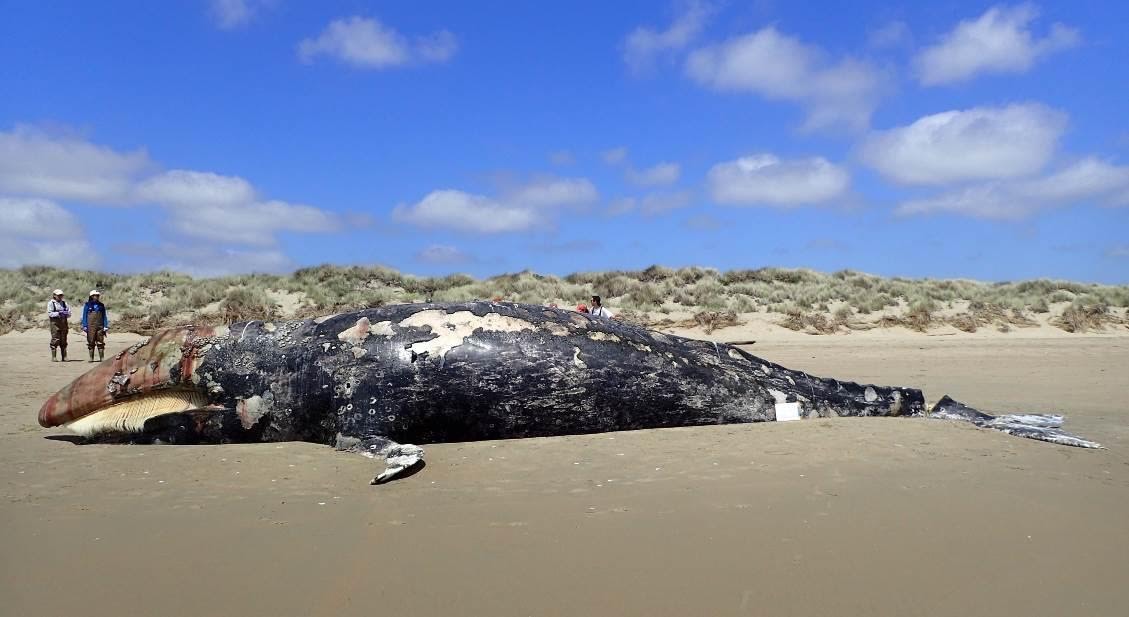 MENDOCINO, 7/13/2020 — Responding to whales stranded on the beach is nothing new to Sheila Semans, but the relative regularity of the event doesn’t make it any less shocking. Walking out on to the coast and seeing such a big, majestic animal stuck on the shore when it should be gliding in the water is difficult to process every time. “There’s nothing more disturbing, viscerally disturbing than seeing a whale dead on your beach, and having to understand what caused that,” said Semans, the executive director at the Noyo Center for Marine Science, an independent nonprofit education, research, and conservation facility located at the headlands of the Noyo River.

2020 is the second year in a row of higher than usual gray whale mortality along the Pacific Coast from the southern tip of Baja, California to Alaska’s Beaufort Sea. Scientists aren’t yet certain what is causing the elevated mortality, but early evidence points to climate related stressors, explained Semans.

The National Oceanic and Atmospheric Administration (NOAA) found, through necrospy examinations, that many of the deceased gray whales were emaciated. Semans explained that likely, the gigantic animals, which, when healthy, can reach 50 feet and 90,000 pounds, have not been finding enough to eat in their feeding grounds, in and around Alaska. Without adequate nourishment, they are unable to sustain themselves on their 10,000 mile round-trip migration between Alaska and Mexico, causing them to die from malnutrition. “The ocean is warming and food is being distributed in a way that hasn’t been seen before. They just don’t have enough fuel stored to get them the whole way,” she said.

Marine mammals, such as gray whales, are indicators of general ocean health. Researchers at The University of St. Andrews Sea Mammal Research Unit gather that large declines in marine mammal populations may be evidence of a declining ecosystem.

So far this year, 137 gray whale carcasses have been found on beaches along the gray whales migration route. This is compared to an average of about 19 deceased gray whales spotted by mid July for the years 2000 to 2018. NOAA, which works with organizations like the Noyo Center to track stranding of marine mammals around the country, has labeled this an unusual mortality event (UME) — defined as any unexpected stranding or notable marine mammal die off.

Out of the 137 perished gray whales reported, 18 were found in California, with two landing on the shores of Mendocino County.

Semans says those numbers are likely just a fraction of the total mortality, as most whales that die get washed away from their near shore migration route, out to sea, and sink.

In order to figure out precisely what is causing the gray whales to die in such large numbers, Semans and her colleagues at the Noyo Center do all sorts of data collection, which ultimately gets sent to NOAA to be analyzed alongside information from other marine research organizations. Normally, they record the sex, weight, and general health of deceased whales. For unusual mortalities, they also collect blubber, blood, and tissue samples, a process which involves cutting through as much as 10 inches of blubber.

Gray whales are crucial to the well-being of the ocean ecosystem. They defecate extremely nutrient rich effluent and then dive up and down, using their tail as a pump to spread their feces around the area. “They basically fertilize the primary productivity just by being in the ocean and doing what they do,” said Semans. Mixing the water, going up and down, and fertilizing it [the ocean] helps produce the base of the food chain.” A video Semans shows at the Noyo Center called “How Whales Change Environment,” refers to this phenomenon as a “poonami.”

In addition to fertilizing the ocean and exemplifying the impacts of climate change, gray whales are emblematic of the Mendocino Coast. From the vantage point of Mendocino’s rocky bluffs, one can watch the whales breach, dive and spout as they make their way to and from their Alaskan feeding grounds.

Although it is the second year of heightened gray whale mortality, the species is doing better this year than last. By this time in 2019, there were about 215 total dead gray whales along the Alaska-Mexico migration route, 35 of which were in California, compared to 137 and 18, respectively. The Pacific has been colder and windier this year, which may be contributing to a healthier whale population, explained Semans. “Every year is going to be a different story.”

Despite the improvement in conditions for the whales, Semans remains concerned about warming seas. “We’re seeing all sorts of problems arise due to rising sea temperatures,” she said. “It’s very important to do the work we do with the stranding network so we can understand where these animals are and what sort of stressors they’re facing.”

“Whales are iconic off our coast and understanding the health of our ocean through the health of some of its most iconic inhabitants is a very big aim of ours.”