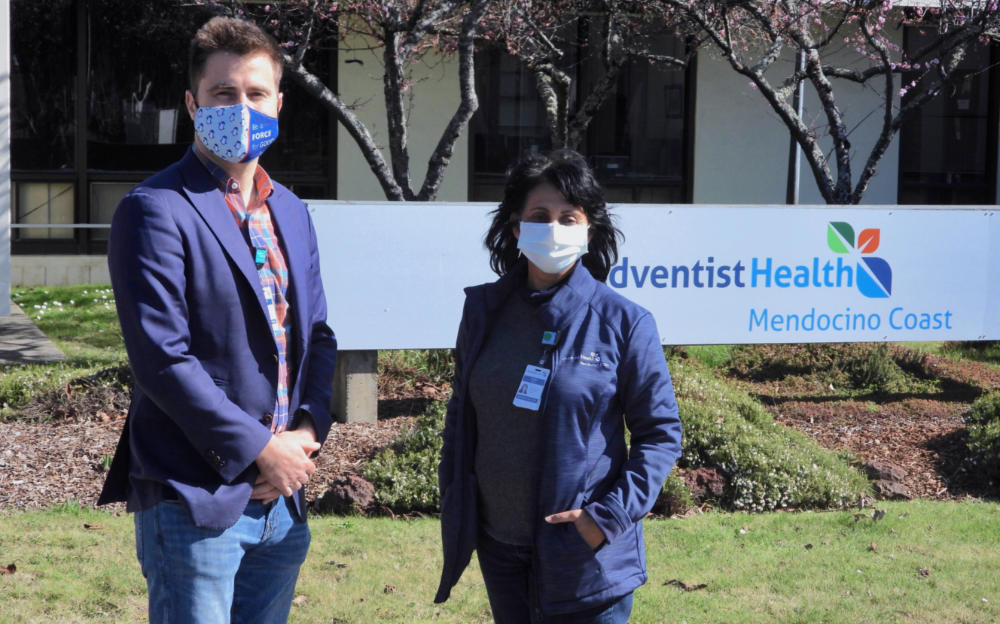 FORT BRAGG, 2/23/21 — When Mendocino County Supervisor Ted Williams posted, about noon on Sunday (on Facebook and the MCN listserve) that there were 45 doses of COVID-19 vaccine available immediately through Adventist Mendocino Coast Hospital in Fort Bragg for the first people who could get there, it seemed like an unusual way to give out the most coveted product in existence.

But it all made sense after going there. About 20 people who had read the Facebook post were turned away but 45 lucky people, including some younger people who would not have been otherwise qualified, got the vaccine. Every shot was used.

How did the scramble happen?

The story starts last Thursday when Adventist Health had administered 750 vaccines at C.V. Starr Community Center. Then, Friday evening, Adventist Mendocino Coast Hospital got 320 more doses from their partner hospital, Howard Memorial, in Willits. That meant everybody would have to work fast, as state guidelines now require vaccines received to be administered quickly, said Adventist’s marketing and communication manager, Cici Winiger. Winiger said because of the short time frame, news of the vaccine’s availability to those 70 and older was put out on local radio on Saturday and through a hospital database, but not the main website where people make appointments.

She said the quick pace was not about the viability of the vaccines, but rather a state mandate that vaccines be put into shoulders as soon as possible.

On Sunday morning at 8 a.m., people who had heard about the clinic by radio or special email began to sign up for the clinic that began at 10 a.m and were issued tickets to come back. The 320 vaccines had been put into syringes by pharmacists, meaning they had to be used. The hospital came up 45 tickets short, so the call went to the social-media friendly Williams (whose district includes a substantial part of the hospital district, but not the Fort Bragg hospital site itself). Winiger said the short time frame precluded going back to local radio stations, which also might create a flood of vaccine seekers.

Sunday’s event provided a look into how Adventist Health operates vaccine clinics as a team. This reporter came upon a working crew that included Judson Howe, who serves as the president for Adventist Health in Mendocino County, heading up all three local hospitals, and Judy Leach, who serves as the administrator for Adventist Health Mendocino Coast. They explained that the 45 doses would have been left over if not for Williams’ last minute pitch on Facebook. “It’s our goal to never waste a single dose. We want to get every vaccine dose into an arm,” Leach said.

Although the 45 extra people were not barred by an age limit, those people also now have appointments to come back for their second dose along with the rest of the 320 people who got shots on Sunday. With the Moderna vaccine, the second doses are to be given about 28 days after the first dose. The oldest recipients were prioritized at the top for the available shots, working down to younger people.

“People were kind and courteous as they waited for their vaccines and wanted to ensure that we prioritized the oldest individuals,” Leach said.

Leach comes to every vaccination clinic, doing things like helping set up and watching those who have had shots afterwards for any signs of a reaction. She said the efforts are communal ones, with everybody pitching in and volunteers providing an important link.

“That’s the beauty of working here at Adventist Health. We are all together. We are all one,” said Michelle Norvell, administrative assistant to Leach, who was working alongside Leach..

The event points to the difficulties of administering vaccines that often arrive on short notice to multiple sources. And even with great demand, there are almost always people who don’t show up and creative solutions required for any leftover, Winiger said.

About 40 people worked to pull off the event, Winiger said. There was regular hospital staff, many working on top of their regular hours, and volunteers from the Mendocino Coast Healthcare Foundation* and Hospital District Board. Winiger said Fort Bragg Mayor Bernie Norvell was there (he is married to Michelle Norvell) and the Fort Bragg Fire Department came to direct traffic.

“Adventist Health did a COVID clinic last week for 750 local seniors at the C.V. Starr Center in Fort Bragg and will likely do another one there on Thursday. Details will be shared as the vaccine is made available to us,” said Leach. A vaccination clinic is also being planned for Wednesday in Ukiah.

*Correction: An earlier version of this article mistaken referred to the Coast Healthcare Foundation by their former name, the Hospital Foundation.