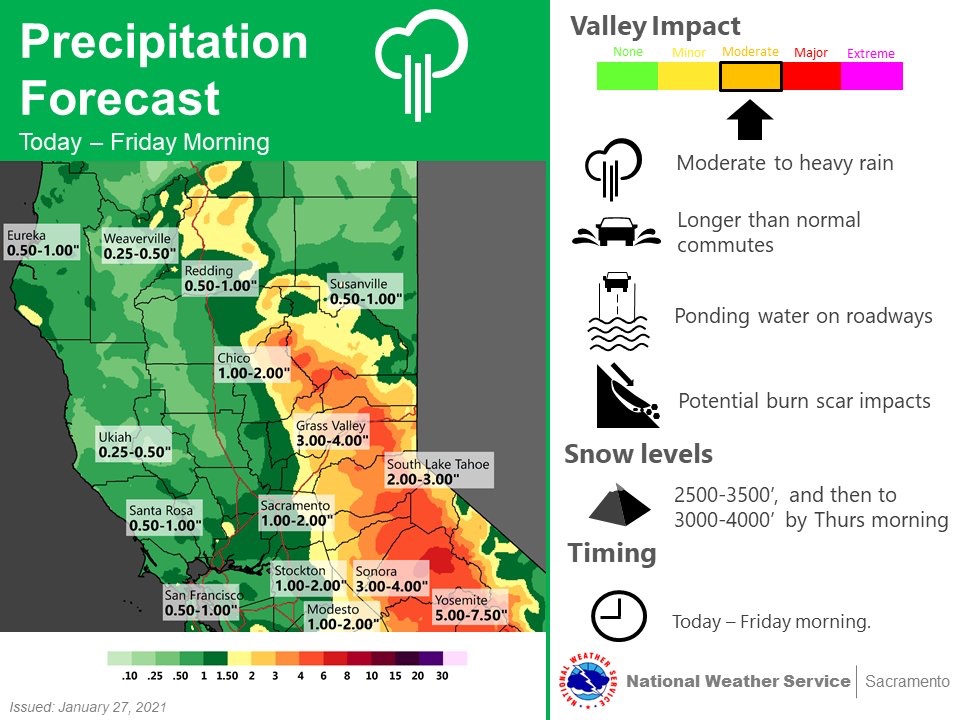 Editor’s note: Inland Mendocino Voice staff have been having internet connectivity issues all morning, as have many other people across Mendocino Co. We apologize for the delays.

This is an evolving situation, and we’ll be updating through the day. Read our coverage from yesterday here.

UPDATE 4:40 p.m. — After much hard work by CalTrans road crews, clearing snow and cutting through tree limbs, the 101 has been fully reopened along its Mendocino Portion, from Frog Woman Rock in the south to the Peg House in the north.

It appears that all major roads in the county have been cleared, with road workers clearing a veritable horizontal forest of downed trees, in cold snowy conditions, allowing free travel once more.

Still conditions are in constant flux as this heavy winter storm continues to churn through California. Though the heaviest showers moved north, and the brunt of the atmospheric river hit the Santa Cruz-Monterey area, rain and snow have continued in areas of Mendocino County, and are expected to pick up somewhat overnight.

Farther south torrential rain have lead to flash flood warnings, and some debris flows in areas.

The rain and snow are expected to continue through the week, though not as severe.

ORIGINAL
WILLITS, 1/27/21 — The strongest winter storm of the season so far slammed Mendocino County yesterday, and power and road remain in disarray.

A few thousand people in and around Laytonville, Willits, Brooktrails, Redwood Valley, the Anderson Valley, and various other spots. There are some estimates for time to “restoration,” but with so many problems, and with so many roads blocked, PG&E workers are also struggling to get to the issues to fix them.

The great transport artery of our region, U.S. Route 101, remains closed at various points: between Willits and the 162 at Oill Well Hill, between Laytonville and Cummings, and between Phillpville and Weott. These blockages are the result of a combination of snow and a great many downed trees and branches.

On place it’s no longer closed is at the Ridgewood Grade, between Redwood Valley and Willits.

Farther south the atmospheric river continues to pound the Bay and Central Coast. In Santa Cruz County flash flood warnings have been reissued and ash flows and mudslides have occurred, especially around recent burn scars.

But Mendocino appears to have received a reprieve from the storm, with heavier rain and snow expected both north and south of us. Scott Carroll, a meteorologist with the National Weather Service in Eureka, explained that heavy rain showers and substantial snow (at higher elevation) are still expected north of Cape Mendocino (that is roughly Rockport), as well as in Monterey and Santa Cruz, and even Marin, but Mendocino should see relatively mild weather for the rest of the day, with precipitation picking up again this evening and continuing through the night.

Said Carroll, “We’re going to continue to see showers across the area, they’re going to be gradually tapering off in intensity, through the day.”

The snow line will continue to rise through the day, but the high mountains in the east of the county will continue to receive snow. Much farther inland, the Sierras are seeing massive snow dumps, and blizzard conditions. Travel over the 80 and 50 have been disrupted, and any travel east is not advised.

The storm yesterday turned out to be far colder than expected, and snow levels dropped down below 1000 feet in some places. Some spots even reported snow briefly sticking below 1000 feet. At 1500 feet around Laytonville people reported more than a half foot of snow.

The Willits City Council cancelled their session for tonight, due to the weather.