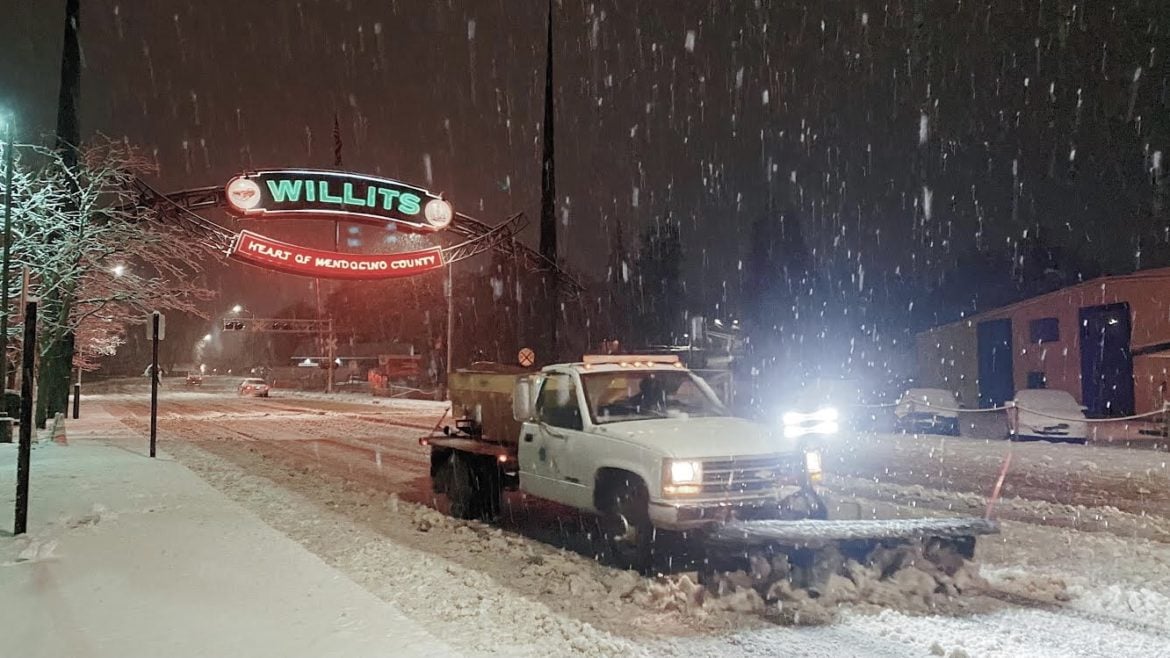 UPDATE 1/27/21, 12 p.m. — Road and power crews are working hard around the county to clear downed trees, roads, and abandoned vehicles and restore power after last night’s storm, but due to the extent of the damage, re-opening all the roads will take some time. 101 has re-opened south of Willits, and may be re-opening north of Reynolds Highway soon, but cars and trees must be cleared from the roadway first. Crews are also working to re-open 101 north of Laytonville and have opened a passage for emergency responders. Sherwood Road and other Brooktrails roads, as well as north county roads are also in the process of being cleared, and crews are also working to retrieve a number of vehicles that slid off the road or embankments around the county during the storm or early this morning.

State Route 175 is closed four miles east of Old Hopland due to accidents and downed trees. We’ll provide a complete update shortly, but if you can avoid travel, please do as conditions remain difficult in many places. The current list of closures and incident from Caltrans and CHP can be found by scrolling to the bottom of this article to the weather resources.

UPDATE 10:55 p.m. — The situation on the roads of Mendocino County is grim. Everywhere cars have spun out, gone off the road, become stuck. Tree limbs are down and power is out in wide areas of the county. Amidst this chaos several roads have been closed, some officially, some unofficially by mother nature. A flash flood warning has been issued for a large portion of Sonoma County around burn scars. (See CalTrans QuickMap)

A year of extreme weather has primed the North Coast for a dangerous night, with burn scars ready to give way to debris flows, and reports of loose hillsides leading to small mudslides on the 162. Across the region strong winds are knocking over trees, and snow-laden tree limbs are falling. Downed branches and trees have closed the 175 between Mendo and Lake counties. In Brooktrails snow heavy trees are presenting a real danger to both roads and humans — look out and look up.

As of about 10 p.m. snow had turned to rain in many places, which unfortunately can mean increased risk of flooding and mudslides. And the storm was expected to increase, with very high winds forecast overnight.

Perhaps the Sonoma Sheriff’s Office summed it up best in a tweet, “It’s raining a lot. Make good choices. That is all.” Though of course that should read “snowing” for Mendocino. Indeed the road conditions and levels of snow fall are among the most severe in quite a few years. In the Little Lake Valley where snow rarely sticks, about four inches have accumulated, and places in Brooktrails are reporting over a foot.

Brooktrails and many other parts of the county are without power, and in Brooktrails downed trees have closed several roads.

In short, there is too much happening to accurately report. Travel anywhere is extremely ill advised, and you must travel tonight use caution and a great deal of common sense. Everyone is already stretched very thin, from CalTrans workers to the California Highway Patrol, and there have been reports of people stuck in cars on snowy roads for many hours. Do not add to the problems if possible.

Said one CHP officer, “If you don’t to have to drive please, please do not.”

UPDATE 7:20 p.m. — The rough weather has closed roads across the county and has now lead to extensive power outages. PG&E is reporting about 1200 customers without power around Laytonville and out to Branscomb. Another 1376 customers have lost power from Covelo down the 162. Yet another roughly 802 customers in Brooktrails are in the dark on this cold night. One-hundred and fifty eight people lost power on Shimmons Ridge. Then south of Ukiah 1758 PG&E customers have been sent back to the 19th century. Yet more outages happening in Boonville, Leggett, Fort Bragg, and other parts of the Coast.

UPDATE 7:00 p.m. — The 253 is closed on the high hills between Ukiah and Boonville. The 101 north of Laytonville remains closed. Several cars are stuck on the Willits side of the Ridgewood Grade near the scales, blocking traffic. Sherwood Road in Brooktrails has had problems all day and police are stationed at the bottom enforcing chain or 4-wheel requirements.

The roads are rough out there, be careful.

Traffic accidents and fallen trees continue to occur as night falls in Mendocino County, and the winter storm with high winds will continue tonight. Plows and tow trucks are making headway in clearing a number of the mountainous roads in north county, but multi-vehicle accidents or slides have been reported blocking Sherwood Road in Brooktrails, on Blackhawk Road south of Willits, on Alderpoint Road near Bell Springs Road, and a number of places along 101 north of Willits, as well as a tree in the northbound lane near Creekside Cabins.

Snow is also hitting roads in central Mendocino County which reach higher elevations, including Orr Stings Road. The Orr Springs Road Association posted on Facebook around 5pm: “ALERT: Do not attempt to drive up or down Orr Springs Road if you have a 2WD car or truck. This affects areas around 6-8 miles up from Ukiah. Wonder Ranch, Greenfield Ranch, Running Springs Ranch and Singley Ranch are experiencing snowy and icy conditions. Many cars and trucks are sliding off into ditches. Use extreme caution. The roads are BAD. Report on Tuesday, Jan. 26 at 5pm.”

We’ve included links to the CHP incident page, Caltrans Quickmap and other useful resources at the bottom of this article for the most current info for specific roads.

UPDATE 5:10 p.m. — U.S. Route 101 remains closed to all vehicles, except those with snow tires and four wheel drive, between Laytonville and Cummings. However, several big rigs and dozens of cars are stuck on the road and traffic is stopped, so even if you get through the CalTrans stop it’s likely not advisable to try to get through.

Brooktrails Director Tony Orth reported in Brooktrails that Sherwood Road is completely blocked near Peacock Lane due to about 25 cars being stuck. He also reports about 6 inches of accumulated snow near airport.

On the 101 a vehicle lost control and went over the side at Oil Well Hill, north of Willits, sliding down an embankment about 50 feet feet.

According to Willits Police Department’s Facebook page, as of 4 pm, “4:00pm: Sherwood Rd @ N Main St is restricted to 4-wheel drive, all wheel drive, or chains to enter Brooktrails due to hazardous snowfall conditions. We cannot offer an estimate for full re-opening at this time, but will update post when able.”

UPDATE 4:06 p.m. — It’s official, the 101 is closed between Laytonville and Cummings (which is south of Leggett on the 101). CalTrans shut down the road due to snow.

UPDATE 3:00 p.m. — Snow has begun to stick in various valley regions of Mendocino, including on some parts of the 101. The California Highway Patrol is warning that northbound traffic is at a stand still from Laytonville on, with a great many big rigs stalled.

Various cars are stuck on the road way and more than a dozen, mostly small, accidents have occurred in the Humboldt-Mendo area.

CHP is now saying that they may close traffic between about Leggett and Laytonville to big rigs and non-four-wheel-drive vehicles.

WILLITS, 1/26/21 — The strongest winter storm of the season is blowing into Mendocino County and all of Northern California this afternoon, and is expected to bring substantial rain and snow to the region. Meteorologists forecast that a light dusting of snow could fall in higher valleys, such as Willits and Laytonville, and potentially more than a foot of snow could fall on the higher peaks of the eastern part of the county. A winter storm warning has been declared for much of the county, as well as a wind advisory along the coast and a flash flood warning in large parts of Sonoma County.

Later today the snow will give way to heavy rain at lower elevation, and strong blustery winds are expected, especially near the coast and and along ridges.

Pacific Gas & Electric has warned that the storm might knock down power infrastructure leading to outages, and officials are cautioning people traveling on mountain passes to carry chains and be prepared for road closures. Travel in the Sierra Nevada tonight is discouraged.

A list of weather resources to check current traffic, weather, outages, and road closures is included at the bottom of this article.

Closer to home, some snow may stick on U.S. Route 101 between Willits and Laytonville, and CalTrans and the sheriff are preparing for that possibility.

Perhaps a greater fear, but lower concern, is the possibility that intense precipitation could result in mudslides and debris flows in burn scars of our recent devastating fires. On this front the colder weather in Mendocino County has helped us out. As MCSO Lt. Shannon Barney explained, along with National Weather Service meteorologist Chris Burling, because most of the precipitation falling on the August Complex burn scar will be in the form of snow, debris flows are extremely unlikely. Burling added that the forecast does not show any short burst of intense rain sufficient to start a flow. On top of that, most of the burn scar for the August Complex is in very remote and unpopulated areas, and so risk to property and life is lower.

Of somewhat more concern in the burn scar for the Oak Fire, which burned north of Brooktrails and down to the 101. That scar does include some steep ravines, is very near a major highway, and is at an elevation where rain is more like, as opposed to snow.

“We had a conversation yesterday with the National Weather Service…they said it’s less likely to cause debris flows if it snows on it. Where we are kind of watching and concerned, and CalTrans is too, is the fire scar from the Oak Fire along 101,” said Lt. Shannon Barney. He added that there’s some concern of issues along Indian Dick Road, near Covelo, and Forest Road 7 in the Mendocino National Forest.

However, as Chris Burling, meteorologist at the NWS, pointed out, the real brunt of the storm is expected to hit farther south, where it will come as rain, and debris flows are much more likely in the Bay Area.

The initial snow level should begin around 2000′, and lower in some valleys where cold air gets trapped, but quickly rise. Heavy snow is expected above 3000′ feet, where more than a foot of snow could fall on high peaks, and lower between two and three inches of rain are expected through Wednesday.

After Wed. a string of smaller storms are expected to continue passing through.